The math turns difficult for late tax-return filers who opted for a new regime that lowered tax in return for them not claiming deductions; these are taxpayers who made no investments to claim tax breaks during the year while having lower taxes deducted from their salaries by employers.

Taxpayers can file their returns even after the July 31 due date lapsed, but it’s no relief for those who opted for a new regime that offered to tax them at a lower rate.

First announced in the Union Budget on February 1, 2020, this new income-tax regime offers the lower rate of taxation to those who do not claim as many as 76 tax deductions.

Many individuals chose the alternative in 2020-21 - the first financial year that the regime was implemented. But the due date for filing of returns was extended because of COVID-19.

Hence, the new tax regime seekers awaiting an extension in tax filing deadline were caught in a fix. To claim the benefits of the lower tax regime, you have to file your returns by the due date.

“If one is filing belated return, then the new tax regime benefits cannot be claimed. The new tax regime declaration mentions that one has to file returns under Section 139 (1) within the deadline to claim the benefits,” says Paras Savla, partner at KPB & Associates.

For the self-employed, if they have opted for the new regime, it is available for a lifetime; they have a chance of changing it once after choosing the option. 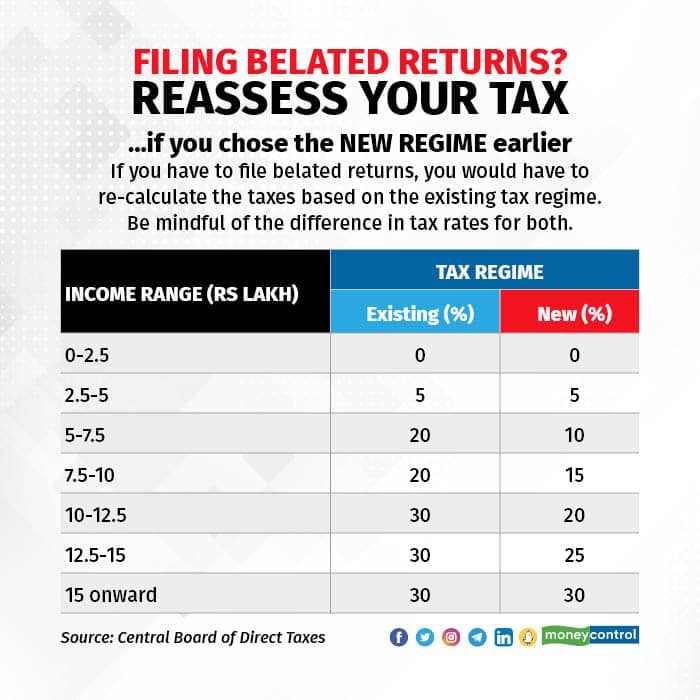 Self-employed taxpayers can have a chance of changing tax regimes once after choosing the option. Salaried individual can make this choice every year

“But for a salaried individual, the tax regime – new or existing – can be selected every year,” says Savla.

Penalty and higher taxes
Apart from paying a Rs 5,000 late filing penalty, late filers would have to pay additional tax, too, this year.

“Whatever TDS has been deducted, there could be a shortage resulting from the change in regime based on the income level of the person and the investments that have been made during the financial year,” says Ameet Patel, partner at Manohar Chowdhry & Associates.

A lower rate of 10% of the income is applicable to those having income between Rs 5 lakh and Rs.7.5 lakh as against 20% under the old tax regime.

“For instance, someone who has an income of Rs 14 lakh -15 lakh and opted for the new tax regime as it was beneficial, the tax deducted at source was as per new regime rates. As the tax rates are lower for the new tax regime one would need to pay additional tax if they haven’t filed the returns within the deadline,” says Savla.

Deductions perplex
Another area of concern for those who were intending to follow the new tax regime during the financial year is that they aren’t permitted to claim 76 tax deductions and hence they did not invest to save taxes during the year.

Also read | Everything you need to know about the difference between revised, belated and updated income-tax returns

“A new tax regime would propose a lower tax rate; however, it does not permit tax deductions,” says Amit Gupta, MD, SAG Infotech.

Deductions and exemptions such as Sections 80C, 80D, Housing Rent Allowance, leave travel allowance, clubbing benefits for minors and so on aren’t permitted under the new  regime.

Many may not even have saved in the right instruments to claim deductions.

For such people, there are certain expenses that can be claimed under the belated returns that they would now have to file based on the old regime.

“If they have paid health insurance premium for self and parents, they could claim the Section 80 D benefits under the belated returns, even if the employer hasn’t been notified about the same. Additionally, school tuition fee can be claimed,” suggests Savla.

Difficulty in calculations
But since these deductions were not claimed with the employer, the Form 16 numbers wouldn’t suffice and you would have to do a fair bit of calculation to arrive at the actual taxable income.

“Those who want to now file belated returns under the existing tax regime would face serious difficulties as the Form 16 calculations are based on the new tax regime and the figures may not match,” says Patel.

So, ensure you seek help from a professional and also be on the lookout for follow-up emails from the income tax department, as the figure of your returns wouldn’t necessarily match those mentioned in the Annual Information Statement and Form 26 AS for tax deducted at source.

Select the right regimeSalaried individuals and pensioners can choose between the old tax regime and the new concessional tax regime in every assessment year based on their convenience.

However, taxpayers having business or professional income do not have the leeway to choose between the two tax regimes in every financial year. Such taxpayers will have only one option to switch between the two regimes.

“During ITR filing, you can choose either of them. But to have maximum tax savings, it is important to select suitable tax regimes at the start of the financial year,” says Gupta.