Why the new income tax regime has few takers

Those who claim deductions of at least Rs 2.5 lakh a year have stuck to the old tax regime

For tax-payers who had chosen the new, alternative tax regime introduced in Budget 2020, assessment year 2021-22 was the first time they had to file returns under the framework. In fact, salaried tax-payers had the option to switch between two tax regimes even at the time of filing their income-tax returns. That is, the existing tax regime that offers tax benefits and a new regime which offers a lower tax rate for those who give up on the benefit of tax deductions for select savings and expenses. 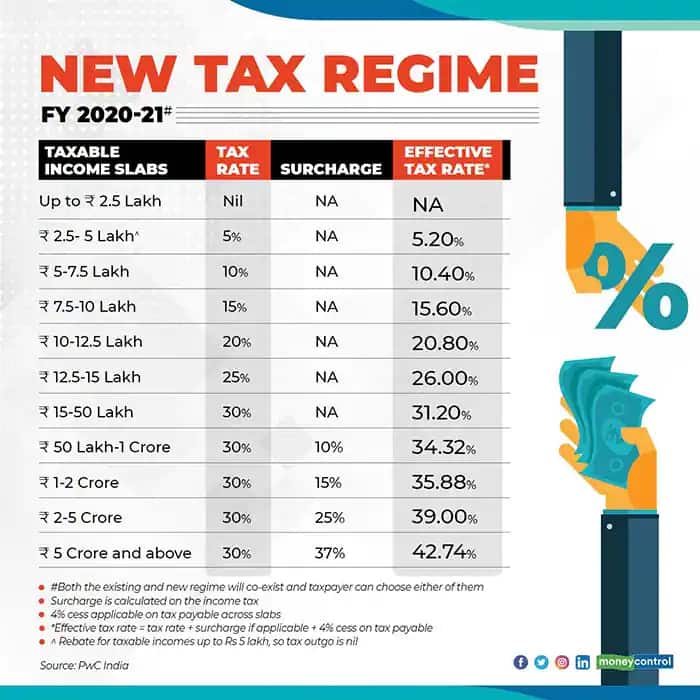 This has led to additional procedural complications at both employers’ and chartered accountants’ desks. “Most organisations and their HR departments feel maintaining employees’ records on their choice between the two regimes increases the complexities and paperwork burden,” says Prashant Singh, VP & Business Head - CPO, Teamlease Services.

Since the extended deadline for filing income tax returns for the assessment year 2021-22 is now over, Moneycontrol.com decided to take a dip-stick survey on whether the new tax regime option has attracted Indians due to the low tax structure.

A cross-section of tax professionals informed Moneycontrol that only a small pie of their customer base opted for the new framework. “Two high networth individuals (HNIs) out of hundreds of clients have opted for the new tax regime,” Karan Batra, Founder, Chartered Club reveals.

The lacklustre acceptance is not just in the national capital, but in other  cities too. Raju Shah, partner at R C S P H & Associates from Ahmedabad says, “Hardly 18-20 cases out of 700-plus clients have opted for the new tax regime. Such tax-payers have picked the new framework as they are not interested in investments and want a low effective tax rate. They simply base their decision on the net tax liability.”

Tax professionals catering to the higher income group have hardly seen any takers for the new regime. Vaibhav Sankla, Principal, Billion BaseCamp Family Office, says, “Those who claim deductions of at least Rs 2.5 lakh a year have stuck to the old tax regime, in our experience. All our HNI clients fall in this category.”

Who is opting for the New Regime?

But the layman hardly has any idea of what is beneficial. Neither is he planning the year ahead based on the regime.

“Instead of planning it in advance, individuals are comparing the two options at the end of the financial year and then selecting the regime based on low tax liability. In some cases, the younger population, which doesn’t save in the tax-saving investments, is opting for the new tax regime,” says, Paras Savla, partner at KPB & Associates.

Tax-payers who opted for the new regime did so to avoid locking money into section 80C investments, which come with a lock-in period. “They prefer to invest in FDs instead of locking into their investments for 3-5 years in tax saving instruments,” says Batra, whose clients have taken the call to switch to the new regime after evaluating their final tax liability under both the regimes.

Who should opt for the new tax regime?

While the lower tax slab of 5 percent isn’t available in the existing tax regime, the benefit isn’t replicated in the higher slabs. “The new regime is better suited for lower income groups, freshers who may wish to avoid paperwork and pensioners,” according to Sankla.

So, what is the income level where the NTR is suitable? “Freshers or those who earn less than Rs 7.5 lakh could find new regime beneficial. Those who earn more than Rs 10 lakh have largely chosen to stick to the old regime,” recommends Singh of Teamlease Services.

The pandemic too has forced some to take shelter in the low tax, no deduction scheme. “Usually, those who have not invested, especially during COVID-19 period or have recently started earning and need funds instead of locking them in investments are opting for the new tax regime. Those who have a small home loan amount, too, consider the lower tax system,” Batra observes.

Also read: Which tax regime to choose? A five-step guide to help you make the right choice

…and the ones who should not

While it is natural to select the regime currently suitable, it is also important to keep the future in mind while choosing the regime, especially if you are not a salaried individual. “Self-employed individuals who may want to take a hefty home loan in the future should avoid opting for the new tax regime as the tax deductions of home loan offer tremendous tax-saving opportunities, especially when a couple jointly takes a home loan,” says Shah.

One-time switch hurdle for the non-salaried

While salaried individuals can switch between the new and existing regime at the start of any year, self-employed can make a choice only once during the lifetime. “If the option to alter each year is offered to self-employed too, then the new tax regime could gain more traction as these business individuals can’t predict their future income and can actually utilise the facility,” says Batra.

Low awareness and advanced planning limit the attraction of NTR. The paperwork burden for corporates’ administration teams is another challenge. “One of the reasons why the new system has found limited traction is that companies have not gone all out to create awareness. Organisations allow employees only one opportunity – at the beginning of the financial year – to choose a tax regime for the purpose of computing tax deducted at source (TDS). So, employees have to wait until return-filing to change their choice if they receive bonuses or mid-year hikes and find that their chosen regime is not beneficial,” Singh elaborates.

If companies and the Central Board of Direct Taxes (CBDT) work to iron out these issues, then many more could benefit from the hassle-free system of the new regime. Filing a tax return too would be relatively simpler under the framework.
Khyati Dharamsi

Preeti Kulkarni is a financial journalist with over 13 years of experience. Based in Mumbai, she covers the personal finance beat for Moneycontrol. She focusses primarily on insurance, banking, taxation and financial planning
Tags: #Income Tax #Tax
first published: Jan 3, 2022 09:54 am