Upcoming Webinar:Join the webinar on ' Unique ways of participating in agri commodity derivatives' on June 18, 5pm. Register Now!
you are here: HomeNewsBusinessPersonal Finance

The Reserve Bank of India (RBI) has left key policy rates unchanged, while reiterating its accommodative stance in the monetary policy review announcement on December 3.

For home loan borrowers, it means that the good times are likely to continue. What this is also means, however, is that further rate reductions seem unlikely. “The RBI MPC’s decision to keep policy rates unchanged was as expected. We maintain our view that the rate cut cycle is over, for now,” said Suvodeep Rakshit, Vice-president and Senior Economist, Kotak Institutional Equities. The upward revision in growth forecasts leave little room for change in stance. “Given the expected inflation and growth trajectory, we believe the committee may stay put on rates through 2021,” Anagha Deodhar, Economist, ICICI Securities 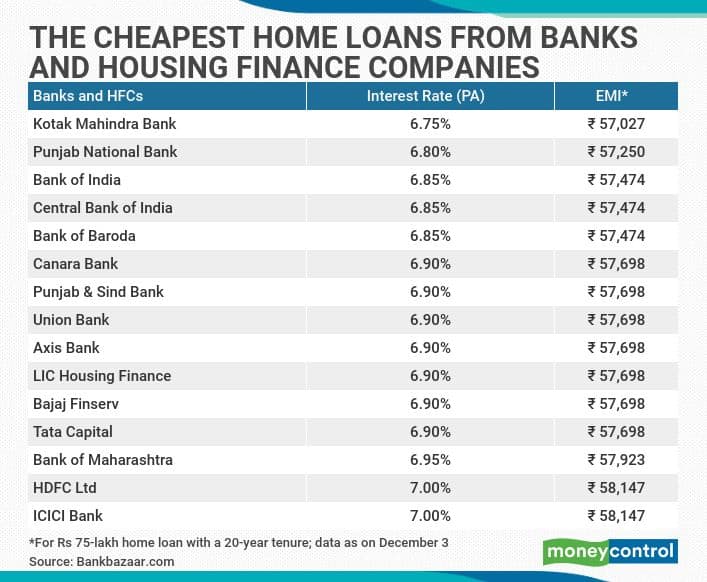 So, if you have been contemplating buying a house, therefore, there is no reason to delay your decision, as we have pointed out earlier. It is also a good time to  switch lenders if your bank’s interest rates are higher than the current lucrative offers. Home loan rates in India are at a 15-year low at present.

Interest on a home loan of Rs 75 lakh start at as low as 6.75 percent, with Kotak Mahindra being the cheapest lender (see table). It is followed by Punjab National Bank, which charges 5 basis points more, as per data from BankBazaar. Amongst housing finance companies, LIC Housing Finance, Bajaj Finserve and Tata Capital offer home loan rates of 6.9 percent.

For tabulating the cheapest home loans, interest rates on home loan for all listed (BSE) public and private sector banks which offer home loans of up to Rs 75 lakh have been considered for data compilation. Housing finance companies (HFCs) as listed in National Housing Bank’s (NHB) website have been taken into account. Banks and HFCs for which data is not available on their websites are not considered. Banks and HFCs in their respective sections are listed in ascending order on the basis of interest rate i.e. bank/HFC offering lowest interest rate on home loan (loan amount= Rs 75 lakh) is placed at top and highest at the bottom. Lowest rate offered by the bank/HFC on a loan of Rs 75 lakh is considered in the table. Equated monthly installment (EMI) is calculated on the basis ofiInterest rate mentioned in the table for Rs 75 lakh loan with tenure of 20 years (processing and other charges are assumed to be zero for EMI calculations)
Moneycontrol PF Team
TAGS: #banking #EMI #Home Loan #interest rate
first published: Dec 7, 2020 01:35 pm