How one common ITR form will ease income tax filings

In the common ITR form, tax filers will be required to answer questions in 'yes' or 'no' format and additional information will be asked accordingly.

One of the primary and difficult tasks while filing the income tax return (ITR) is to select the correct ITR form applicable to the tax filer. Presently, taxpayers are required to select from seven forms -- ITR-1 to ITR-7, depending upon several factors like source, level, nature of income and so on.

To ease the process, the Central Board of Direct Taxes (CBDT) is planning to come up with a common ITR form. For this purpose, it has floated a draft common ITR form and sought inputs from stakeholders and the general public.

After the selection of the applicable ITR form, typically the next important and difficult task that an income tax assesses faces is putting the required information in the correct place. For many taxpayers, it takes lots of effort and time. According to the CBDT circular, “The current ITRs are in the form of designated forms wherein the taxpayer is mandatorily required to go through all the schedules, irrespective of the fact whether that particular schedule is applicable or not.” This increases the time taken to file the ITRs and creates difficulties for taxpayers, it said.

The rationale behind the common ITR form

The common ITR form aims to simplify the tax filing process further and reduce the time it takes.

However, not all ITR forms will be replaced by the common form. A few existing ITR forms will continue to co-exist. CBDT said, “It proposes to introduce a common ITR by merging all the existing returns of income except ITR-7. However, the current ITR-1 and ITR-4 will continue. This will give an option to such taxpayers to file the return either in the existing form (ITR-1 or ITR-4) or the proposed common ITR, at their convenience.”

According to Kuldip Kumar, partner, Vialto Partners India, “ITR-1 and ITR-4 are very simple forms and do not require additional disclosures, whereas ITR 7 is for Trusts and the number of returns filed using ITR-7 is too less.” That means once implemented, a common ITR form will replace ITR-2, ITR-3, ITR-5 and ITR-6.

As per current rules, ITR-2 should be used if you have income in the form of capital gains, from more than one house property, or if you earn a foreign income, or own a foreign asset. ITR-2 is also applicable if you hold a directorship in a company, or own unlisted equity shares (See: graphic). 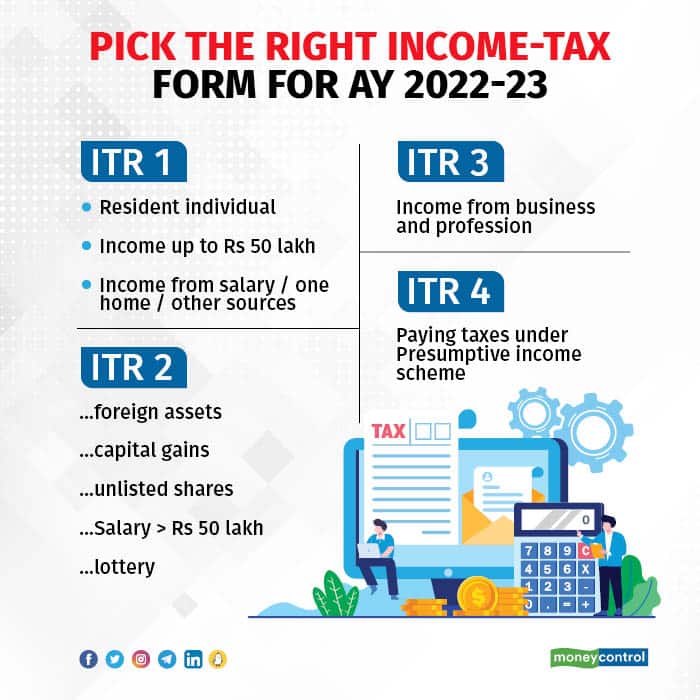 A proposal floated by the CBDT will replace ITR-2, ITR-3, ITR-5 and ITR-6 with one common ITR form.

ITR-3 should be used by businessmen and professionals who do not earn salaried income. All the income heads eligible for ITR-2 are valid for ITR-3 as well. Similarly, ITR-5 and 6 are used by Limited Liability Partnerships (LLPs) and businesses, respectively, to file returns. So all these forms are for taxpayers with non-salaried incomes.

In the common form, tax filers will be required to answer questions in 'yes' or 'no' and additional information will be asked accordingly. There will be more than 40 such questions in the common ITR form designed in such a manner and order that if the answer to any question is ‘no’, other questions linked to it will not be shown to the taxpayer.

Also read | Five most important questions about income tax filing you had, but didn't know who to ask

Amarpal Chadha, Tax Partner and India Mobility Leader, EY India believes it to be in line with the international best practices. “In the proposed form, the taxpayer will be required to answer questions which are applicable and fill the schedules linked to those questions which have been selected as ‘yes’. This is designed with the intent to improve taxpayer experience in the filing of tax returns and reconciliation with third-party data," he said.

Not the first timeHowever, this is not the first time ITR forms are getting revised or modified. Many experts believe regular changes in ITR forms are detrimental, instead of doing any good. “The tax department should be cognizant that frequent changes in the tax filing process create discomfort for taxpayers, especially those who do not take the assistance of service providers and need to learn the new process afresh. Just last year the new portal was launched which had several technical glitches - hopefully, the experience for taxpayers is a lot better this time,” said Aarti Raote, partner, Deloitte India.
Ashwini Kumar Sharma
Tags: #Income Tax #personal finance #Tax #Taxation
first published: Nov 3, 2022 09:36 am