Another death has struck the Rs 56,000-crore family run business, synonymous with gold loans in Kerala. But Muthoot has long shown a penchant to fend off setbacks.


The business of offering loans using gold as collateral has mushroomed across the country in recent years. But nowhere has this business been as enmeshed in the social fabric of a people than in Kerala. And no company in Kerala has been so closely identified with this business than the Muthoot group.

Muthoot has 166 tonnes of gold jewellery kept as security as of December end. It boasts a retail investor base of more than one lakh across debenture and subordinated debt portfolio. It serves two lakh customers every day across 29 states, serviced by 25,000 employees.

Even the pandemic has done little to take the sheen out of Muthoot’s business. Customers have found gold loans convenient to meet emergency fund requirements due to the competitive processing time, according to a senior Muthoot Finance official, who spoke on the condition of anonymity. 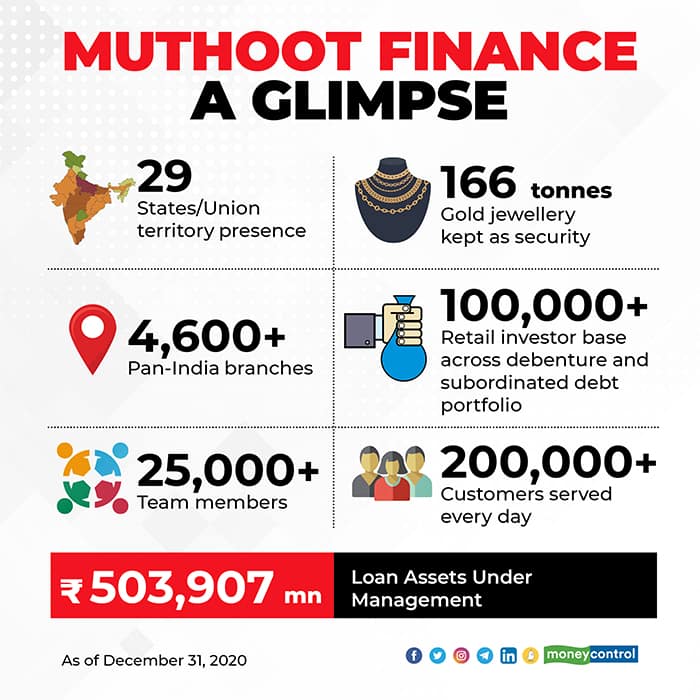 Yet for a group that has been growing at breakneck speed, Muthoot has also been tiptoeing through a minefield of bad news.

Muthoot, who met his tragic end in Delhi, was declared the 26th Richest Indian and the richest Malayalee in India by Forbes Asia Magazine, 2020. Muthoot is a member of the is a member of the 18th generation of the ‘Thevervelil Family’, later known as the Muthoot family, in Kozhencherry that has a family business legacy of over 800 years, according to its website.

MG George Muthoot became the managing director of Group in 1979 and its chairman in 1993. The Delhi police has ruled out any foul play in Muthoot’s death, yet speculation has swirled in Kerala about foul play primarily because of the group’s litany of recent troubles.

This happens to be the second tragedy that has struck the group in recent years. In August 2009, Paul Muthoot George, 30, son of M G George Muthoot, was hacked to death around midnight  on the Alappuzha-Changanassery road. In September, 2019, the Kerala High Court acquitted eight people allegedly linked to this case observing the prosecution failed to prove the charges.

Business in Kerala too has suffered setbacks. Muthoot has been at the receiving end of trade unionism and employee strikes. A section of Muthoot employees have been striking work demanding better wages and employment terms.

Muthoot has maintained that it offers one of the best pay packages in the industry but after the strikes, the group decided to shut a significant number of branches in Kerala. It maintained that the move will not hurt the business as only a small portion of the business less than 4 per cent come the home state now.

What impact would George Muthoot’s death have for the group? The company’s shares fell 1-2 percent post the death. No doubt, Muthoot’s death marks the end of an era in the family.

“There are around 10-14 family members directly or indirectly involved in the business in Muthoot family. It is an art that how the family has grown the business keeping everyone together,” said an industrialist from Kerala, asking not to be named.

For a family run business, death of a key member is usually a setback. But Muthoot has long shown a propensity to fend off adversity.

Let’s got to the beginning to explain.

Pandam panayam was a commonly seen hoarding on shop-fronts across Kerala until a few decades ago. In Malayalam, the words meant gold loan business. People looked at these shops with fear because that was only the last resort in emergencies—no one really wanted to pledge their family gold.

Gold pledging was considered a social taboo then. It was believed that someone will pledge the family’s gold for money only as a last resort. Doing so was believed to lower the family social status.

At that point, gold lenders were also seen as loan sharks that would go to any lengths to recover money from their borrowers. It wasn’t an organised or regulated business.

Anyone who had enough money to lend could start a pandam panayam business. Some call them blade companies-- (firms that charge exorbitant rates of interest from borrowers and use coercive practices to recover money)—even today.

Cut to the present. You wouldn’t see many pandam panayam boards on the roadside. Organised gold loan lenders have taken the place of the local moneylenders of the bygone era.

‘God’s own country’ has a long history of its religious, cultural linkages to gold. Kerala households stock gold not just as an asset but as a symbol of their social status. They love to ‘touch and feel’ the yellow metal. Gold is unavoidable in ceremonies and during festivals. Generations pass on gold ornaments that carry sentimental value. They wouldn’t want to part with their swarnam  gold in Malayalam) unless it is the last option.

Even gods in Kerala love gold. Kerala’s Padmanabhaswamy temple has one of the biggest old treasurer in the world valued over $22 billion.

Today, the pandam panayam boards have been replaced by those carrying names of gold loan NBFCs (non-banking finance companies) such as Muthoot Finance and Manappuram.

Among the companies that were quick to cash in on the winds of change and make the most of the booming gold loan business was Muthoot. The group was launched by a businessman named Muthoot Ninan Mathai as a small trading business in 1887 in Kozhencherry of Pathanamthitta in Kerala.

It swiftly grew to become a diversified financial services conglomerate. It has since diversified into a scrum of businesses.

“Companies like Muthoot and Manappuram changed the face of gold loan industry in Kerala. It was an unregulated business,” said Kochouseph Chittilappally, a prominent businessman from Kerala and founder of V-Guard Group.

Muthoot built its empire rapidly by opening new branches almost every month for years across the state and outside. Assets grew at a faster pace, at around 25-30 per cent annually. It soon ramped up business outside Kerala to over 5000 locations and outside the country. It practises a safe business model —majority of lending business is backed by collateral in the form of gold that was lying idle in the households until then.

There are around eight main companies in the group. 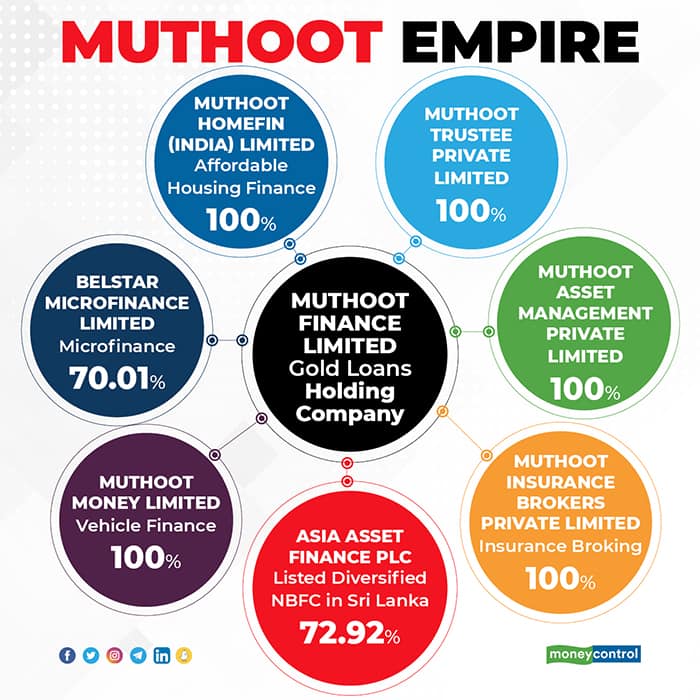 According to the December quarter investor presentation of Muthoot Finance, the group has total loan assets of Rs55,799 crore and a branch network of 5417. The Group logged total net profit of Rs 2,795 crore

Firms like Muthoot played an important role in corporatising the business and bring it within the RBI’s rules, according to Chittilappally.

That is one way to look at the business. Analysts say in the last decade, the Reserve Bank of India brought in strict rules to govern gold loan companies, especially with respect to the value of loans against the gold pledged.

“It was a totally unregulated market. Then the RBI brought in LTV concept as it was concerned about the systemic risk because of huge concentration of business gold loans,” said P G Jayakumar, Managing Director and CEO of Gosree Finance, a Kerala-based NBFC, and former CEO of Dhanlaxmi Bank.

But Muthoot has grown despite RBI regulations. It is a group that has thrived against adversity with an inimitable style.

Many businesses in Kerala, a state rife with militant trade unionism, balk at strikes. Not Muthoot.

The management put up a brave face against warring employees and said it will close down more branches if employees did not allow the branches to function.

Last month, the talks between Muthoot finance and its striking employees yet again failed to reach a consensus. An observer, appointed to monitor the talks, informed the Kerala High Court that talks had failed again. According to George Poothottam, senior counsel for the Muthoot, the striking workers with the assistance of outsiders were causing physical hurt and injury to those willing to work. No effective action was taken by the police against those who had caused damages to the property.

Gold loan companies typically give up to 75 percent of the value of gold (known as loan-to-value-ratio) as loan to borrowers. Hence, if gold value crashes sharply, the value of collateral too goes down.

There is the matter of competition. Banks such as Federal Bank and CSB Bank are increasing their focus on gold loans because it as a safe bet. For instance, CSB Bank that has gold loans at around 40 percent of their overall loan book wants to grow it to 50 percent.

From that perspective, what impact will MG Geroge’s death have on the group?

“I think chairman’s death is not a big factor. It should be a one-off event,” said Jignesh Shial, research analyst at Mumbai-based brokerage house, Emkay Global. “Gold loan business is directly linked to gold prices and price increase will always benefit them. Muthoot has been better than Manappuram and has maintained their market share,” Shial said.