Traders with existing positions can continue to hold Apollo Tyres with a stop-loss placed below the swing low of Rs 191, and add on fresh positions above Rs 208 for a potential short term target around Rs 220.

The market bounced back sharply after a steep drop in the last two straight sessions, and clocked nearly 1.5 percent gains on April 26, driven by buying in auto, FMCG, metal, pharma and bank stocks. Positive global trend also aided the sentiment.

The benchmark indices recouped all their previous day's losses. The BSE Sensex rallied nearly 800 points to 57,357 and the Nifty50 gained nearly 250 points to 17,201, while the broader markets also joined the bulls' party.

Here's what Ruchit Jain of Angel Broking, recommends investors should do with these stocks when the market resumes trading today:

Post a sharp up move till August 2021, the stock has been consolidating since then. On a long term time frame chart, this entire consolidation seems to be a time-wise correction within an uptrend. The stock has managed to hold above its '200 DEMA' (day exponential moving average) in this corrective phase and is now on a verge of a breakout on the short term charts.

In Tuesday's session, the volumes along with the price up move were better than the daily average and the 'RSI Smoothened' oscillator too is positively placed.

Hence, traders can look to buy the stock around current levels of Rs 346 for a potential target of Rs 395 in the near term. The stop-loss on long positions should be placed below Rs 315. The stock has been forming a 'Higher Top Higher Bottom' structure and is thus in an uptrend. Prices are trading in a 'Rising Channel' and hence, traders should trade with a positive bias and continue to ride the trend till the stock is trading above the support end of this channel.

Traders with existing long positions can hold the stock with a stop-loss below Rs 720 for a potential target towards the higher end of the channel which is seen around Rs 820. 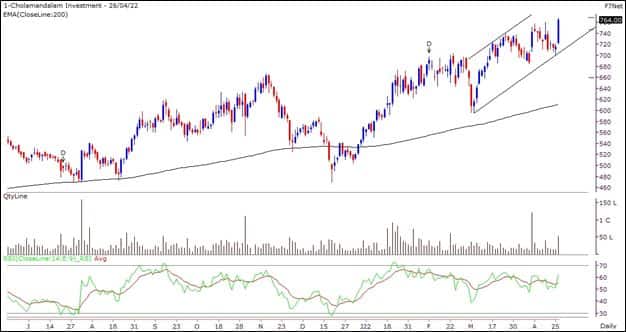 Post the recent corrective phase, the stock has started forming a 'Higher Top Higher Bottom' structure on the daily chart. The volumes in last few days are also good along with the price up move.

However, prices are trading tad below its '200 DEMA' resistance which is placed around Rs 208 and a breakout above this could then lead to a short term rally.

Hence, traders with existing positions can continue to hold the stock with a stop-loss placed below the swing low of Rs 191, and add on fresh positions above Rs 208 for a potential short term target around Rs 220. The stock has recently given a breakout from a long consolidation phase and the volumes have picked up tremendously post the breakout. The short term moving averages are riding above the medium term which indicates an uptrend and a positive structure.

The 'RSI Oscillator' is also hinting at a positive momentum and hence we expect the prices to continue the northwards move in the short term.

Traders can look to buy the stock around current market price of Rs 85 and add on dips towards support of Rs 81 for a potential target of Rs 98. The stop-loss for long positions can be placed below Rs. 77. The stocks from the Adani group have been buzzing since last few weeks and this stock from the group has recently given a breakout from a 'Bullish Flag' pattern.

Post the breakout, we have seen a strong follow up buying which can be seen from the price-volume action. As of now, there are no divergence signs and hence, one should continue to ride the trend with a trailing stop loss method.

The immediate support is now placed around Rs 865 which should be used as a reference for stop-loss and the prices could continue the rally towards Rs 933 and Rs 968.