Trade Spotlight | What should you do with Force Motors, MRPL, Supriya Lifescience on Wednesday?

Force Motors has witnessed a sharp upmove from its trendline support. In the recent past, the pullback moves have resisted around its '200 EMA' (exponential moving average). Thus, we could see a continuation of this resistance towards this average which is now seen around Rs 1,157.

The market remained volatile and managed to gain strength in the last hour of trade on June 28. The benchmark indices ended largely flat as the Nifty50 rose 18 points to 15,850, and the BSE Sensex climbed 16 points to 53,177, backed by positive global cues.

The volatility continued to be on the higher side, may be ahead of monthly expiry on coming Thursday, which experts feel needs to fall and sustain below 20 mark for stability in the market going ahead. India VIX, which measures the expected volatility in the market, rose by 2.1 percent to 21.45 levels.

Stocks that were in action and performed much better than broader markets included Force Motors which climbed 13.3 percent to Rs 1,061 and formed a large bullish candlestick pattern on the daily charts. The volume was way above average volumes, in fact, the highest single day volume since September 15, 2021.

Mangalore Refinery and Petrochemicals was locked in 10 percent upper circuit at Rs 90.35, while Supriya Lifescience jumped 8 percent to Rs 359, the highest closing level since June 6, and formed a big bearish candle on the daily charts with very high volumes.

The stock has recently corrected along with the correction in the broader markets. The momentum readings were in a deeply oversold zone last week and hence, the stock is retracing some of the losses and is in a pullback mode.

In this pullback, the resistance will be seen around Rs 390 while the immediate support is placed around Rs 320.

Traders with existing positions can hold the stock with a stop-loss placed below the mentioned support for a probable short term target around Rs 390. 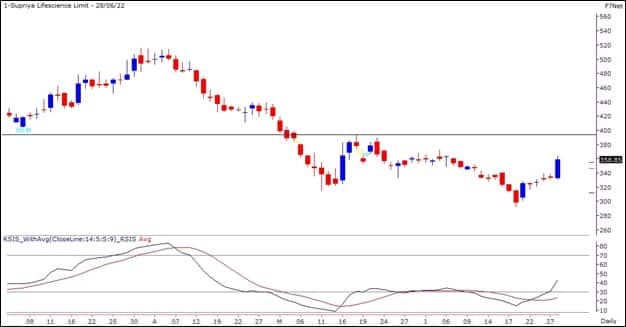 The stock had witnessed a sharp upmove in the months of April and May 2022. Post registering a high around Rs 127 in early June, the stock has reversed sharply and has retracement some of those gains. This sharp reversal is seen as a ‘Spike Top’ in technical analysis and until we see fresh buying interest in the stock, the stock is unlikely to witness a momentum towards recent highs.

In the near term, the stock can see a pullback move as the momentum readings were oversold post the recent sell-off.

On the higher side, the stock can see a move towards Rs 101 and Rs 108. Traders can look to lighten up longs around the mentioned resistances on up move and look for fresh signals.

The immediate supports for the stock are now placed around Rs 81 and Rs 75. The stock has witnessed a sharp upmove from its trendline support. In the recent past, the pullback moves have resisted around its '200 EMA' (exponential moving average). Thus, we could see a continuation of this resistance towards this average which is now seen around Rs 1,157.

A close above this resistance is required for a broader uptrend to resume. On the flipside, the immediate support for the stock is placed in the range of Rs 925-960. 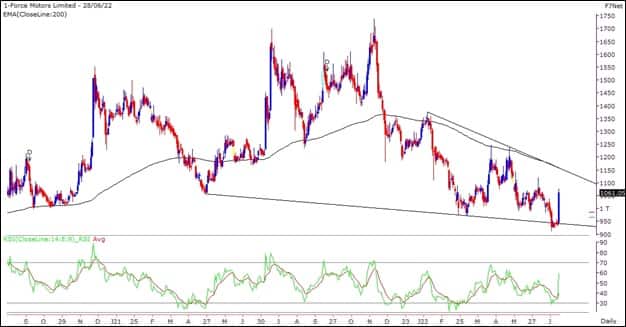 Disclaimer: The views and investment tips expressed by investment experts on Moneycontrol.com are their own and not those of the website or its management. Moneycontrol.com advises users to check with certified experts before taking any investment decisions.
Sunil Shankar Matkar
Tags: #Force Motors #Market Edge #MRPL #Nifty #Sensex #Stocks Views #Supriya Lifescience #Technicals #Trade Spotlight
first published: Jun 29, 2022 06:34 am