Based on the open interest future percentage, there were 111 stocks including Delta Corp, Chambal Fertilizers, Max Financial Services, Cipla, and SBI Life Insurance Company, in which a long build-up was seen.

The market seems to be on a strong footing as the benchmark indices extended their strong rally for a third consecutive session on July 29, with the Nifty50 decisively closing above psychological 17,100 mark, backed by FII inflow and buying across sectors after the Federal Reserve signalled slowing the pace of rate increases.

With the increasing confidence among bulls, "if the index sustains above 17,018 levels (the intraday low on July 29), it can extend the upswing towards 17,550, where a slew of resistance points are placed," said Mazhar Mohammad, Founder & Chief Market Strategist at Chartviewindia.

However, the swift up move from the lows of 16,438 to 17,170 in just three trading sessions can lead to some consolidation or profit booking.

Therefore, fresh positions are advised only on dips but with a stop-loss below 17,020 levels on a closing basis, as consolidation for a couple of sessions above 200-day SMA can eventually lead to higher targets of 17,500 levels, the market expert said.

The broader markets have outperformed frontliners, with the Nifty Midcap 100 and Smallcap 100 indices gaining 1.4 percent and 1.7 percent, respectively, as about two shares advanced for every share declining on the NSE.

The Nifty Bank gained more than 100 points to close at 37,491 on Friday, but formed bearish candle on the daily charts as the closing was lower than opening levels. The important pivot level, which will act as crucial support for the index, is placed at 37,223, followed by 36,955. On the upside, key resistance levels are placed at 37,757 and 38,022 levels.

Maximum Call open interest of 17.92 lakh contracts was seen at 18,000 strike, which will act as a crucial resistance level in the August series.

Maximum Put open interest of 25.36 lakh contracts was seen at 16,500 strike, which will act as a crucial support level in the August series.

A high delivery percentage suggests that investors are showing interest in these stocks. The highest delivery was seen in Power Grid Corporation of India, Marico, Petronet LNG, Ambuja Cements, and ITC, among others. An increase in open interest, along with an increase in price, mostly indicates a build-up of long positions. Based on the open interest future percentage, here are the top 10 stocks including Delta Corp, Chambal Fertilizers, Max Financial Services, Cipla, and SBI Life Insurance Company, in which a long build-up was seen. 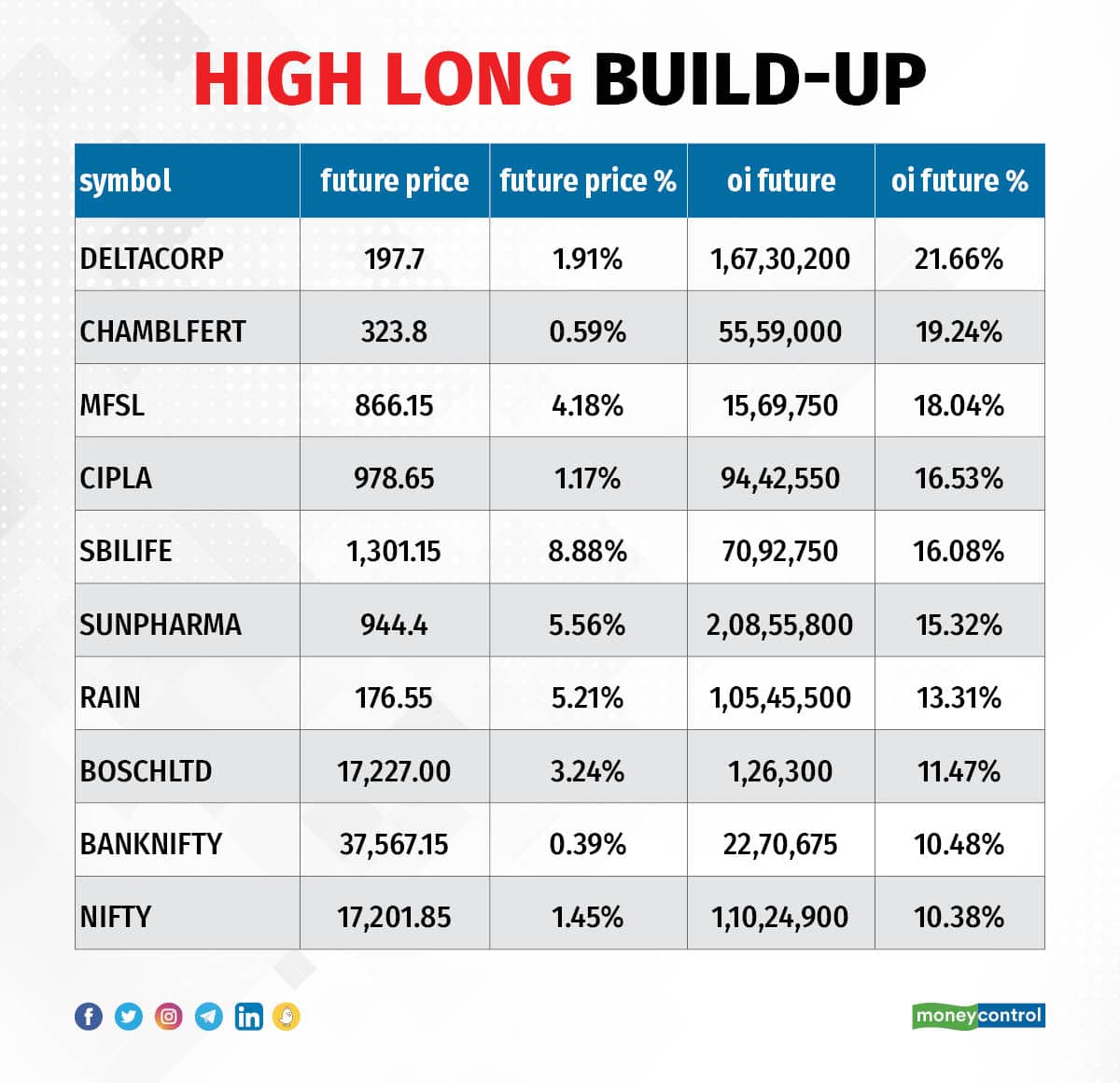 A decline in open interest, along with a decrease in price, mostly indicates a long unwinding. Based on the open interest future percentage, here are the 9 stocks including Laurus Labs, State Bank of India, Coromandel International, Piramal Enterprises, and Whirlpool, in which long unwinding was seen. An increase in open interest, along with a decrease in price, mostly indicates a build-up of short positions. Based on the open interest future percentage, here are the top 10 stocks including Dr Reddy's Laboratories, Intellect Design Arena, Indiabulls Housing Finance, Jubilant Foodworks, and Shriram Transport Finance, in which a short build-up was seen. 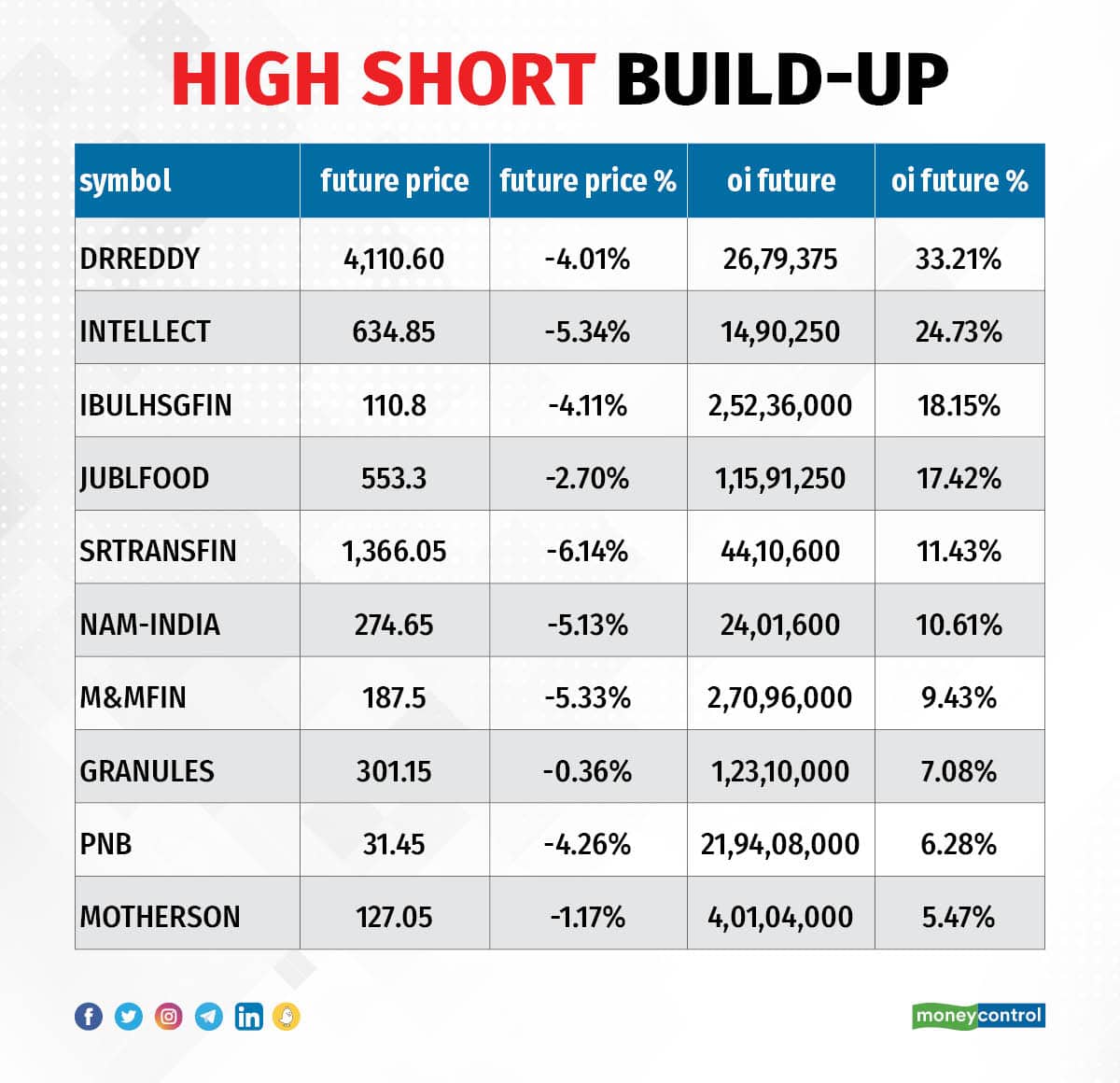 A decrease in open interest, along with an increase in price, mostly indicates a short-covering. Based on the open interest future percentage, here are the top 10 stocks including Dixon Technologies, Container Corporation of India, Crompton Greaves Consumer Electricals, Bharat Forge, and Can Fin Homes, in which short-covering was seen. 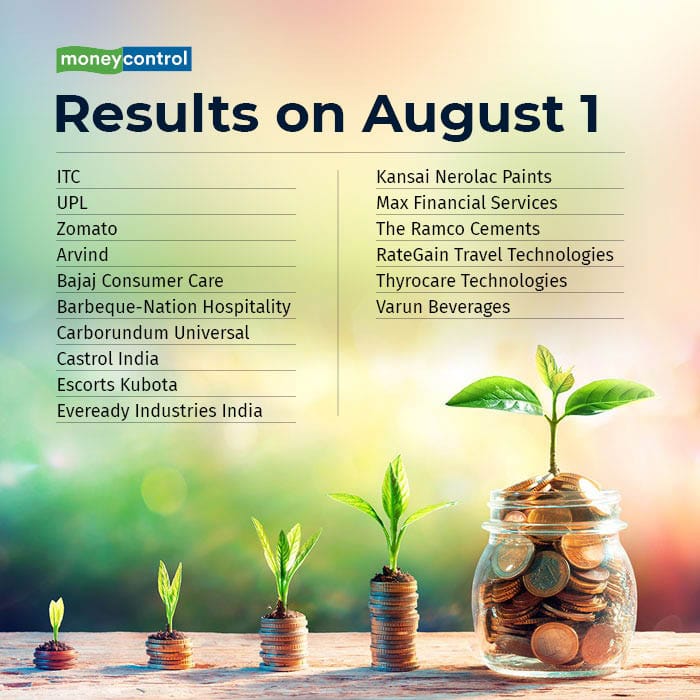 Bank of Baroda: The public sector lender reported 79.4 percent year-on-year growth in standalone profit at Rs 2,168 crore for the quarter ended June 2022, despite fall in other income and pre-provision operating profit. The significant decline in bad loans provisions aided the bottom line. Net interest income grew by 12 percent YoY to Rs 8,838.4 crore in Q1FY23, with credit growth at 18 percent and 10.9 percent YoY increase in global deposits.

IDFC First Bank: The bank recorded highest-ever standalone profit of Rs 474.33 crore in Q1FY23, against a loss of Rs 630 crore in corresponding period of the previous fiscal. The increase in core operating income and fall in provisions aided the profitability, with the sequential growth in profit at 38 percent. Net interest income grew by 26 percent to Rs 2,751.1 crore YoY during the quarter, with 39 bps YoY improvement in net interest margin at 5.89 percent for the quarter. But there was 38 bps decline in net interest margin on a sequential basis.

Dr Reddy's Laboratories: The pharma major entered into a licensing agreement with Slayback Pharma to obtain exclusive rights in the first-to-file ANDA for the private label version of Lumify in the US. Lumify is an over-the-counter (OTC) eyedrop that can be used to relieve redness of the eye due to minor eye irritations. The agreement also provides Dr Reddy’s exclusive rights to the product outside the US.

Rain Industries: The company recorded a 184 percent year-on-year increase in consolidated profit at Rs 668.50 crore for the quarter ended June 2022, driven by healthy top line and operating performance. Revenue grew by 52 percent to Rs 5,540.6 crore due to solid growth in average blended realisation for carbon and advanced material sales, though volumes declined. Operating profit grew by 78.5 percent to Rs 1,210.5 crore during the same period.

JSW Energy: Subsidiary JSW Energy (Barmer) owned 1,080 MW power plant at Barmer retained access to uninterrupted supply of lignite for its operations. The Rajasthan Government informed Barmer Lignite Mining Company Limited (BLMCL) that it is in receipt of ex-post facto- previous approval from the Central Government for transfer of two lignite mining leases (Kapurdi and Jalipa in Rajasthan) from Rajasthan State Mines and Minerals Limited (RSMML) to BLMCL with effect from the date of transfer of the said mining leases. Accordingly, the previous letters issued by the Rajasthan Government directing BLMCL to stop mining operations at the two lignite mines stand withdrawn. As we are in the beginning of new monthly F&O series, we don't have any stock in the NSE F&O ban list for August 1. Securities in the ban period under the F&O segment include companies in which the security has crossed 95 percent of the market-wide position limit.

Disclaimer: The views and investment tips expressed by investment experts on Moneycontrol.com are their own and not those of the website or its management. Moneycontrol.com advises users to check with certified experts before taking any investment decisions.
Sunil Shankar Matkar
Tags: #Market Cues #Market Edge #Nifty #Sensex #Trade Setup
first published: Jul 31, 2022 05:34 pm