If the index shows any recovery, then there could be resistance around 15,400-15,500 area, whereas it could find support around 15,200-15,000 levels, and breaking of which could create some panic in the market, experts say

The market went fully under the reign of bears and kept going down for the second week in a row. The benchmark indices hit a fresh 52-week low in the week ended June 17 as fears of a recession intensified after the Federal Reserve hiked interest rates by 75 bps in its June policy meeting and hinted another 50-75 bps hike in rates in the next policy meeting to control inflation.

The Nifty50 fell more than 900 points or 5.6 percent during the week to close at 15,293.5, the lowest closing level since May 25, 2021, taking two-week losses to nearly 8 percent and the correction of nearly 18 percent from record highs. All sectoral indices fell sharply and closed in the red.

The elevated volatility clearly favoured bears and the price trend also indicated nervousness on the street, but the sentiments indicator like Stochastic showed positive crossover, generally indicates a bit of possibility of recovery from lows. Hence, if the index shows any recovery then there could be resistance around 15,400-15,500 area, whereas it could get support around 15,200-15,000 levels, and breaking of which could create some panic in the market, experts said.

"Taking a glance at the weekly time frame chart, we can see prices sliding below '89-EMA' for the first time after July 2020. So, pricewise, it needs to be construed as a breakdown, does not augur well for the bulls. On the flipside, the Nifty is exactly placed at the previous breakout point of May 2021 which is around 15,400 – 15,300," Sameet Chavan, Chief Analyst-Technical and Derivatives at Angel One, said.

In addition, he said the ‘RSI-Smoothened’ oscillator on the daily chart is showing a ‘positive divergence’ i.e. lower lows in recent prices and higher lows in the oscillator. This condition generally happens at the fag-end of any downtrend. Hence, looking at the charts, we are clearly in two minds at this juncture, the market expert feels.

As far as supports are concerned, 15,200–15,000 are to be seen as immediate supports and breach of the same, would certainly create some panic kind of situation in markets, Chavan said, adding on the flipside that the markets would regain the strength only after surpassing the key levels of 15,700–15,800 on a closing basis. Till then, it’s not advisable to carry aggressive longs overnight.

Here are the top 10 trading ideas by experts for the next three-four weeks. Returns are based on the June 17 closing prices:

Over the past month, the stock has managed to surpass the all-time high of Rs 993. The stock is in throwback mode after hitting Rs 1,058 level, which usually happens to complete the pattern. The stock was down in the first half of the trading session on Friday, although it came back to Rs 997 in the second half, which is positive in the short term.

Depending on the formation, the stock could rebound towards Rs 1,040 or Rs 1,058 levels. However, we need to place a stop-loss at Rs 980 to protect the trading position in it. Until the stock is not crossing the level of Rs 450, it would remain rangebound, however, while looking at the volume expansion, we could see the stock is climbing to Rs 450 level.

On the dismissal of the trading range on the upward side, the stock can gradually move to Rs 490-500 levels. The strategy should be to buy partly at current levels and balance 50 percent to buy around Rs 410 levels. Keep a stop-loss at Rs 399. On the higher side. the targets would be Rs 450 and Rs 490. 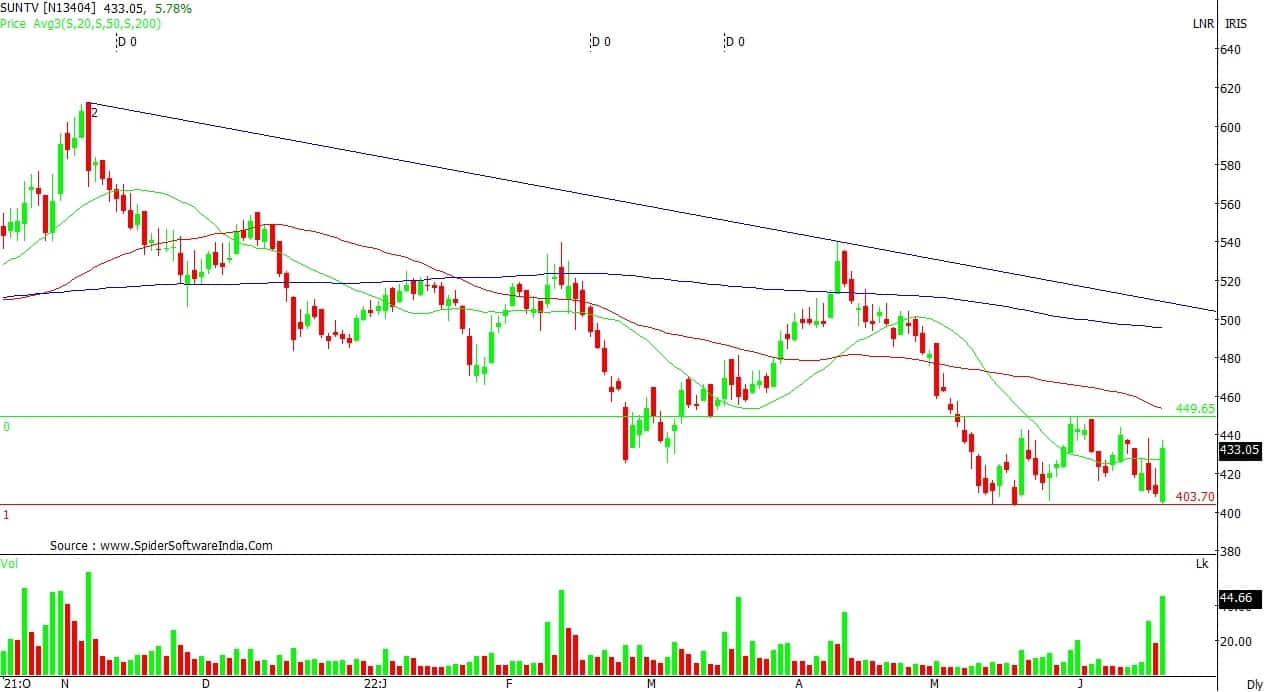 On June 17, 2022, the stock rose to one-month high and outperformed the benchmark-Nifty. Spike in volume and rise in future open interest indicates that major market participants are in favour of the bulls, as risk reward is quite favorable for fresh long position at this juncture.

This could lead the stock towards Rs 226 initially and Rs 237 subsequently. In case of any decline, the stock will find support around Rs 197-193 zone.

After a higher level of reversal (i.e. 52 percent fall from its prior peak level of Rs 340), the stock tested its 61.8 percent

Fibonacci Retracement level of prior mega up-move (Rs 54-340), which was placed at Rs 163 and poised for a fresh up-move.

On June 17, 2022, the stock reversed from its 52-week low and breached its prior daily falling trend. The stock formed a Bullish Engulfing pattern on the daily timeframe chart. Its volume rose to multi-month high.

Its daily RSI reversed from the deep oversold zone (20-level) and after a bullish divergence, gave a buy signal.

This could take the stock towards Rs 220 initially and Rs 240 subsequently. On the lower side, its key Fibonacci retracement level will continue to work as a strong reversal point.

After a rising channel breakdown, the stock tested its medium-term support zone and poised for an up-move. Since late-May 2022, the stock formed multiple bullish trend reversal patterns around that zone on weekly chart.

Its daily technical indicators reversed from the lower levels and are positively poised.

The stock has potential to move towards Rs 480 initially and Rs 500 subsequently. In case of any decline, its medium-term support zone will continue to restrict the fall.

Fresh breakdown on its daily scale from an inverse pennant formation is insync with its on-going weekly bearish trend. The recent ‘Bearish Engulfing’ pattern on its weekly scale reconfirmed the resistance around Rs 2700 zone; which should continue as a firm resistance going forward as the price is expected to revisit the Channel pattern support zone around Rs 2,200.

RSI too has confirmed the weakness as it exhibits a negative crossover at its 50 mark; indicating fresh directional momentum. Fresh short to continue with a stop-loss at Rs 2,610 for a target upto Rs 2,200. Breakdown from a ‘Head & Shoulder’ formation with neckline being placed at Rs 210 now. The recent pullback witnessed exhaustion near the neckline as the trend reversed back to break below its 4 weeks of consolidation.

Trend strength indicator average directional index (ADX) on its weekly scale is about to break above its 25 mark, warranting directional momentum to aggravate further. Sell Canara Bank with a stop-loss above Rs 188 for a pattern target up to Rs 166. 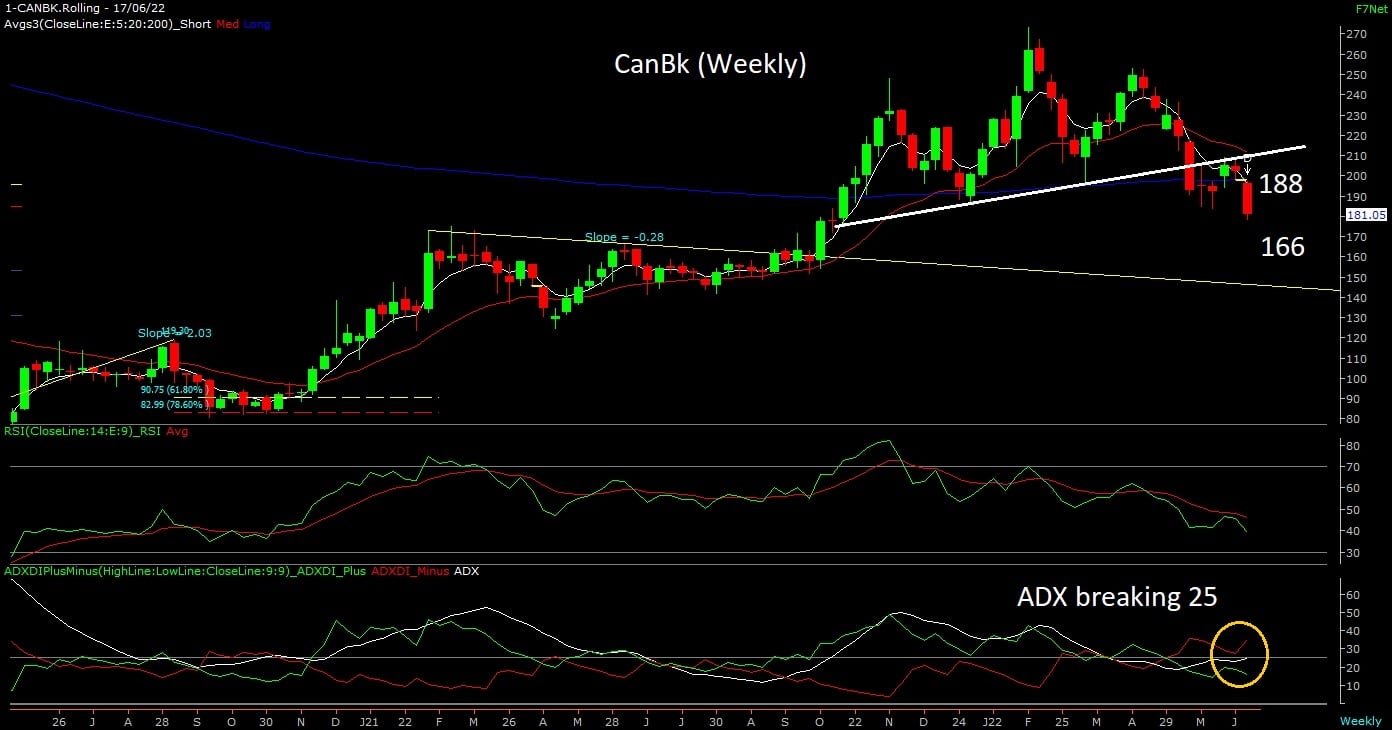 Coromandel is among the select few stocks which is not only showing resilience but also inching gradually higher despite the prevailing market trend. It has been consolidating in a range around its record high and is likely to resume the up move soon. We recommend utilizing this phase to accumulate fresh within Rs 890-920 levels.

IndusInd bank has been trading with the corrective bias, after its failed trend reversal attempt in November 2021. It has spent nearly 6 months in a broader range of Rs 810-950 and is now on the verge of a breakdown from the same. Traders can consider going short within the Rs 820-830 zone.

Most of the gas distribution stocks are reeling under pressure and MGL is trading in sync with the trend. It is currently trading around the crucial support zone of Rs 700 levels however the chart pattern indicates a strong possibility of a breakdown ahead. We thus recommend creating fresh shorts within the Rs 710-720 zone. 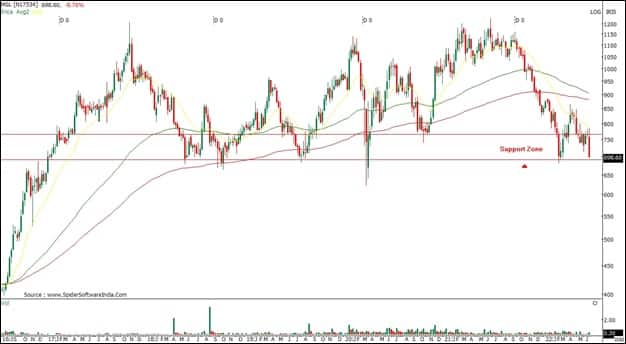