We expect further rebound in markets but the upside also seems capped. The Nifty50 may face hurdle in the 10,550-10,700 zone while 10,100 would continue to act as crucial support

The Indian market managed to end with modest gains last week amid excessive volatility. Weakening rupee combined with a surge in the crude oil prices continue to weigh on the market sentiment.

Though it made an attempt to recover in the middle but the decline in global indices worsened the situation in the following session. The final session brought in some relief as participants took note of recovery in rupee and softening crude oil prices on Monday.

All eyes will be on earnings season as some of the big names like Reliance Industries, Infosys, Hero MotoCorp and ACC will announce their numbers during the week along with several others.

We expect further rebound in markets but the upside also seems capped. The Nifty may face hurdles in the 10,550-10,700 zone while 10,100 would continue to act as crucial support. 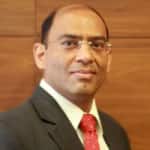 Having said that, a lot depends on how earnings pan out. Besides, movement in the rupee and performance of global markets will remain on traders’ radar. We advise investors to keep hedged positions and focusing more on the stock selection.

Here is a list of top three stock which could give 5-8 percent return in the next 1 month:

In line with other pharma majors, Lupin also witnessed some decent profit taking and retraced closer to its immediate support around Rs 830.

After spending nearly a week around that zone, it has surged strongly on Monday and completed the formation of fresh buying pivot. We advise initiating fresh longs within Rs 870-880. It closed at Rs 886.8 on October 15, 2018.

After a strong rally from Rs 110 to Rs 320, Tata Global has been witnessing a correction for the last nine months or so. It has formed a short-term reversal pattern and is likely to witness a breakout from the declining trend line as well.

L&T has been consolidating in a broader range of Rs 1,200-1,400 for the last eight months and is currently hovering around the lower end of the range.

Disclaimer: The author is President, Religare Broking. The views and investment tips expressed by investment expert on moneycontrol.com are his own and not that of the website or its management. Moneycontrol.com advises users to check with certified experts before taking any investment decisions.
Moneycontrol News
Tags: #Business #markets #stocks #Stocks Views
first published: Oct 16, 2018 11:21 am