Every sector participated in the run seen this month, given expected recovery in earnings and economy after slew of measures announced in last one year.

The market had a spectacular run, especially after the Budget, with the Nifty50 gaining 1,600 points since the start of the current month. All sectoral indices participated in the rally given the expected recovery in earnings and economy supported by the slew of measures announced in last one year.

The rally was also attributed being to consistent FII inflow following trillions of dollars in stimulus poured by global central banks. Economic data points started indicating improvement in the economy, while the quarterly earnings have begun to be better than street expectations for third consecutive quarter.

"Indian economy is witnessing V-shape recovery, which is clearly reflecting in Indian indexes and indexes are trading at life time high. Measures taken by the Modi Government in the current Union Budget and December quarter results will help in maintaining the growth pace of the market," he said.

The broader markets also participated in the rally but underperformed benchmarks. The BSE Midcap and Smallcap indices gained more than 9 percent and 8 percent respectively from last Monday.

Moneycontrol collated a list of top 10 stocks where brokerages initiated a buy call for 13-64 percent return: 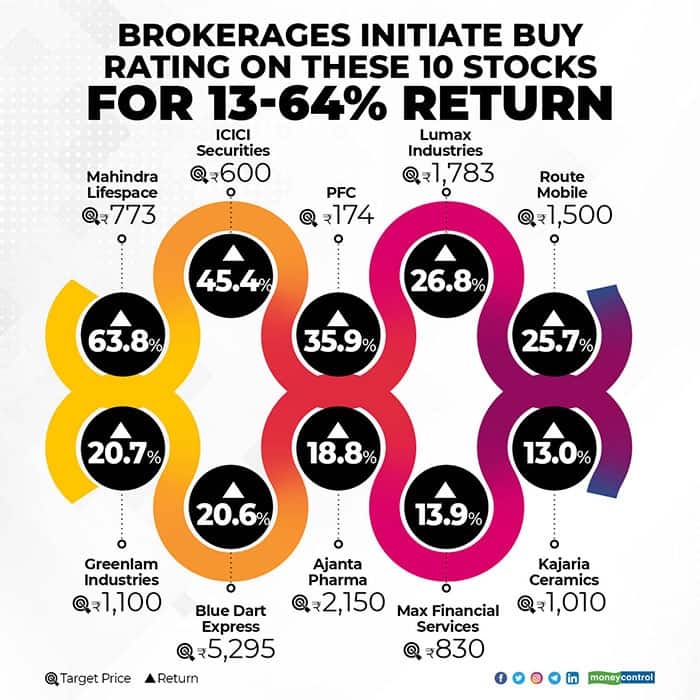 "Route Mobile (Route) is an emerging leader in the 'Pay per use as a Services' model in the expanding CPaaS industry (3x growth over CY20-25E per industry research); it is a beneficiary of the increased acceptance for ‘Digital Communication’ led by COVID-19. Recent fund-raises in both public and private markets confirm robust investor interest in this fast-growing segment. Given strong industry tailwinds, Route is likely to see a further increase in business from enterprise customers and expand beyond A2P messaging to an ‘Omni channel’ CPaaS vendor," JM Financial said.

The brokerage house initiated with a buy rating and a DCF-based target price of Rs 1,500. "OTT and tech peers such as Facebook and Microsoft (recently launched Azure Communication Services unit) launching communication service units, remains a key risk in a highly fragmented and competitive industry notwithstanding robust growth prospects," said the brokerage.

"Mahindra Lifespaces Developers Ltd (MLDL) is perceived to have missed the real estate cycle despite being an early starter. There is no point delving into what has gone wrong; instead we take a fresh look at what can transpire over the next few years. What has changed? Aggression: top management is a mix of Lodha (CEO, CMO, and CSO), Tata Housing (CLO) and Sobha (CPO). Financial strength: it has the lowest borrowing with around 20 percent lower cost than peers," said HDFC Securities.

"Business Development (BD) pipeline: guidance of Rs 500 crore per annum capex on land with Rs 2,000-2,500 crore pre-sales potential. Brand: invokes trust, transparency and corporate governance. Own land bank: captive land parcels and access to group's land bank. MLDL is on the path to multiyear rerating. We initiate with a buy recommendation and March 2022 SOTP of Rs 773 per share," the brokerage added.

Sharekhan initiated coverage on Greenlam Industries with a buy rating and price target of Rs 1,100. Greenlam is expected to ride on a strong growth trajectory led by its leadership positioning, strong domestic growth outlook and rising export opportunities, according to the brokerage.

"Max Life has demonstrated resilient performance amid a difficult macro environment, delivering 10 percent YTD growth in new business APE versus a 3 percent decline for private peers, led by a shift in product mix towards Protection and Non-PAR segments. Both these segments would continue to deliver better than industry trends," said Motilal Oswal which initiated coverage on the stock with a buy rating and target of Rs 830.

"The deal with Axis Bank would create a strategic partnership and increase visibility for long-term business growth via higher cross-sell opportunities. The proposal has received RBI's and CCI approval and is now awaiting IRDAI's clearance," said the brokerage.

"Ajanta Pharma is a diversified branded play with best-in-class return metrics. Its high exposure to branded generics markets (over 70 percent revenue from India, Asia and Africa) offers sustainable growth visibility with superior profitability. Rising scale in the US business is expected to drive margin expansion and increased contribution to the overall profits," said HDFC Securities.

"With the conclusion of major capex cycle (over Rs 1,600 crore in the past 6 years, internally funded) and plant opex reflecting in P&L, operating leverage benefits are expected to drive strong earnings growth of 18 percent CAGR, core-ROCE expansion of around 550bps to 28 percent and free cash flow (FCF) generation of around Rs 1,300 crore over FY21-FY23. Initiate with a buy and target price of Rs 2,150," the brokerage added.

HDFC Securities initiated coverage on Kajaria Ceramics with a buy rating and target price of Rs 1,010 per share. "Continued focus on premium tiles launches and expanding distribution have helped the company (market leader) double its market share to 10 percent in the last 10 years. These factors have also boosted KJC's pricing power, driving its industry-leading margin," said the brokerage.

"KJC has been generating FCF continuously since FY16. We expect it to deliver 13 percent revenue CAGR during FY20-23E, riding on demand rebound since mid-Q2FY21, and strong ramp-up in its bathware and plywood segments. Better pricing power and lower operating costs should lead to 25 percent and 22 percent EBITDA and APAT CAGRs respectively. In FY21, KJC doubled its dividend payout ratio to around 40 percent, owing to a net cash balance and surge in FCF," the brokerage added.

"PFC, the largest lender to the distressed power sector, appears to be coming out of the cyclical lows of its asset quality. We derive our comfort from company's strong operating performance during the pandemic period, around 83 percent of loan book exposure to government entities (virtually zero risk of credit loss) and its ability to raise funds at favourable rates," said Dimensional Securities.

"We also like the reward to risk proposition that PFC offers at current market price, which prices in most of the negatives. Further, the near-term growth challenges has been addressed under the 'Aatmanirbhar' stimulus package which opens up lending opportunities of Rs 1,20,000 crore, exclusively for PFC and REC (around 20 percent of their combined book). The other positive triggers for the companies could be accelerated resolution of distressed assets, synergies from PFC-REC merger and better operating performance on lower credit costs and forex losses," the brokerage added.

Dimensional Securities initiated coverage on PFC with a buy rating and a price target of Rs 174.

"We expect company to deliver healthy growth and outperform the industry growth rate on account of a gradual pick up in 2-wheeler and passenger vehicle demand which will directly improve volumes and its client's robust presence in a passenger vehicle and two-wheeler domestic space. As the economy is arriving back on track, the automotive industry is expected to witness strong demand in the near term," said BP Equities.

"The company is expected to be a major beneficiary of growth due to its robust presence in automotive lightning with a strong clientele base. We have valued the company by assigning a P/E multiple of 23x on FY23 estimated consolidated EPS. We initiate coverage on the stock & recommend a buy rating with a target price of Rs 1,783 per share," the brokerage added.

IIFL Securities initiated coverage on ICICI Securities (ISEC), with a target of Rs 600 per share owing to its strong profitability and stable earnings growth.

ISEC is a leading, diversified, full-service broking company. It is the country’s third-largest broker by NSE active clients (with an 8.4 percent market share as of Q2FY21) and the second-largest non-bank mutual-fund distributor, with around 4.5 percent of industry commissions (FY20).

"At the macro-level, ISEC should benefit from increasing financialization of savings and participation in equity markets, along with increasing adoption of technology. As sourcing from non-ICICIBC channels picks up and the product suite widens substantially, ISEC should be able to sustain its revenue growth. This should enable it to deliver 10-14 percent RoA and 40-58 percent RoE over FY21-23," said the brokerage.

"Fundamentals have strengthened, market share has increased, service quality has improved and premiumization has been maintained. The stock is trading at 18x FY23E EV/EBITDA vs 10-, 5- and 3-year median of 25x, 27x and 23x, respectively. Blue Dart can reclaim previous highs, as growth levers are stronger than ones over FY12-15," said Elara Securities which initiated with a buy and a SOTP-based target of Rs 5,295 with express business at 25x FY23E EV/EBITDA (in line with peers) & investment in aviation subsidiary, BDAL, at BV.

Disclaimer: The views and investment tips expressed by investment expert on Moneycontrol.com are his own and not that of the website or its management. Moneycontrol.com advises users to check with certified experts before taking any investment decisions.
Sunil Shankar Matkar
TAGS: #Market Edge #Nifty #Sensex #Stocks Views
first published: Feb 11, 2021 03:41 pm