The Indian market ended calendar 2020 on a high with Nifty rising about 7.8 percent in December. In comparison, Smallcap and Midcap indices underperformed but still delivered strong returns at 7.2 percent and 5.7 percent, respectively.

Meanwhile, BSE 500, which is often considered a proxy to corporate India, surged 7.7 during December 2020

The stellar performance was also visible in the returns of Portfolio Management Schemes (PMSes) as all the strategies PMSBazaar.com looked at reported positive returns for the month. Smallcap and multicap funds led the charge logging double-digit returns in December.

Out of the 191 schemes PMSBazaar.com tracks, 44 posted gains more than Nifty's. Negen Capital's Smallcap Emerging fund was the top gainer in December, rising 12.83 percent on a month-on-month basis.

The smallcap strategy, managed by Neil Bahal, focuses heavily on financials, as it constitutes about 27 percent of its entire portfolio. FMCG, technology and chemicals were the other major sectors the Rs 16.52 crore fund has exposure in. Its top holdings include Greenpanel Industries, Intellect Design Arena, Kotak Mahindra Bank and Bajaj Finance.

"The market is reflecting our belief that this rally is backed with fundamentals and loads of liquidity. It is a Goldilocks situation at the moment," Neil Bahal Managing, Director at Negen Capital said.

"Q3 numbers should be very strong across sectors. There is no inflation and loads of liquidity. It will be important to keep track of the demand trends Q4 onwards but so far things look good."

Basant Maheshwari Wealth Advisers' Equity Fund at 11.51 percent was the second best performing scheme for December 2020. The multicap fund was also among the top five PMSes in November delivering a whopping return of 22.04 percent. As the name suggests, it is managed by ace investor Basant Maheshwari and has an asset under management (AUM) of about Rs 254 crore. 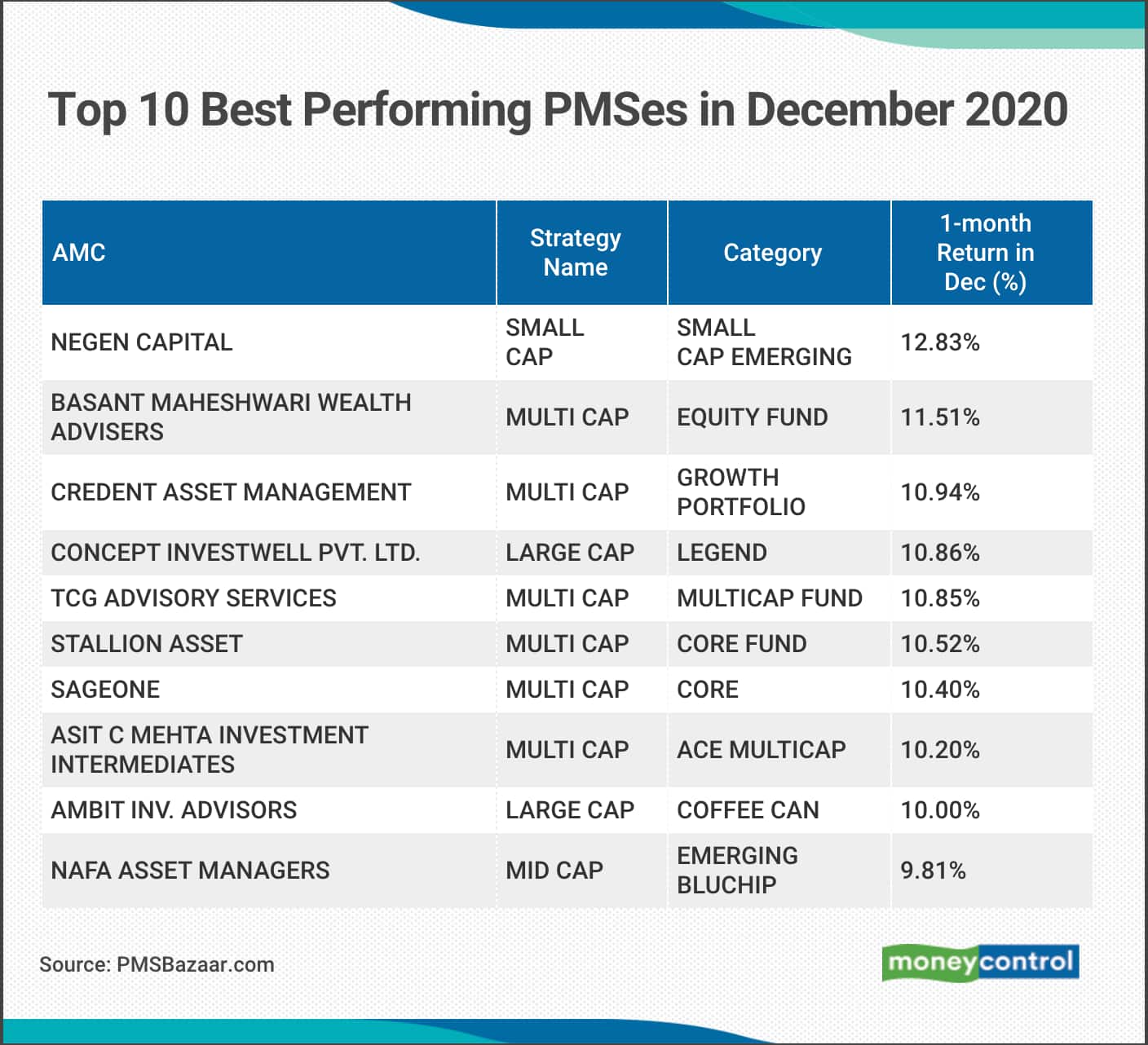 What led the charge?

From the smallcap category, Negen Capital's Smallcap Emerging fund was the best performing PMS delivering 12.83 percent. However, only three out of 13 smallcap-focused schemes managed to outperform the BSE Smallcap index in December.
Among others, Valentis Advisors' Rising Star Opportunity (9.29 percent) was the top performer in the mid & smallcap category, while Green Portfolio's Dividend Yield at 7.66 percent and Kotak's Fintech at 8 percent led the charge in thematic and sector fund category.
Suyash Maheshwari
Tags: #India #markets #PMS
first published: Jan 13, 2021 02:22 pm