Potential risks for the market could be from a global slowdown and China-US trade issues, oil prices and national elections, Kotak said.

The Friday's steep correction dragged the market to wipe out some previous week's gains and closed the passing week (ended December 21) around half a percent lower, but the bulls remained in favour of broader indices.

The sharp fall in crude oil prices which resulted into rupee appreciation, PM Narendra Modi's assurance to bring maximum things under 18 percent GST slab and increase in recapitalisation amount for PSU banks failed to offset huge losses made in later part of the week due to global growth concerns and threat of partial US government shutdown.

However, the broader markets despite big losses on Friday managed to outperform frontliners during the week as the BSE Midcap index gained 0.4 percent and Smallcap 0.9 percent.

The coming truncated week is expected to volatile amid favourable macros and weak global cues, and due to expiry of December futures & options contracts, experts said, adding the trading volume could be lower than normal as generally FIIs go off holiday due to Christmas and New Year.

She said domestically, she sees positives in terms of improving macros such as lower crude prices, appreciated currency, lower inflation as well as possibility of a rate cut by RBI going forward which would get reflected in earnings in coming quarters.

Thus she believes that domestic markets are better placed in comparison with global counterparts.

However, any sharp upmove in oil prices on supply cut measures or populist measures by government ahead of elections will be negative for markets, Teena said.

International benchmark Brent crude futures fell more than 10 percent during the week to $53.82 a barrel and lost 14.5 percent year-to-date.

Despite weak sentiment, these top 20 stocks from BSE 500 index outperformed all indices sharply and rallied in the range of 10-35 percent during the week. 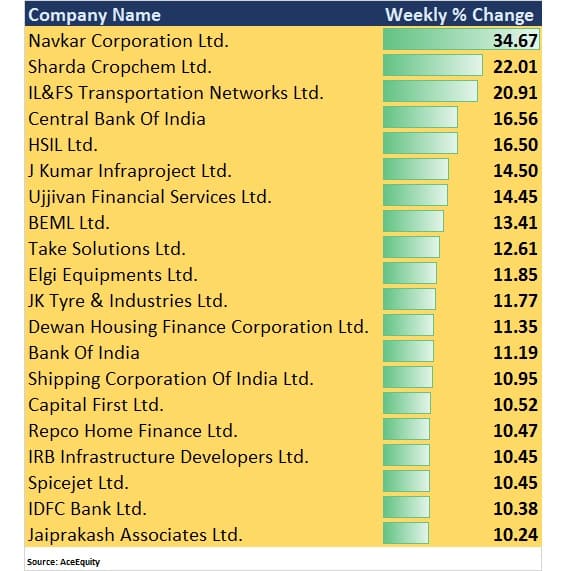 The rally in some of these stocks was news-driven. IDFC Bank and Capital First surged on merger to become IDFC First Bank, J Kumar Infraproject gained on winning a project, and Central Bank & Bank of India climbed amid increase in recapitalisation amount, while airline and tyre stocks gained on lower crude oil prices, and housing finance companies gained on a media report saying Bandhan Bank is in talks with HDFC to acquire Gruh Finance etc.

Overall the broader markets as well as benchmark indices are expected to do well going ahead if the crude stabilised around current levels or declines further and on the back of likely strong earnings growth.

Kotak Institutional Equities expects around 10-15 percent returns from the Indian market in CY2019 on the back of (1) strong earnings growth, (2) possible modest de-rating of overall market multiples on global slowdown concerns and a potential derating of ‘quality’ stocks and (3) a broadly stable macro.

However, potential risks could be from a global slowdown and China-US trade issues, oil prices and national elections, it said.