Why villagers in Odisha’s Jagatsinghpur are against JSW Utkal project

Protests reprise resistance against large industries in other parts of Odisha, such as Hindalco Industries Ltd’s bauxite mine in Koraput district in recent months, and Tata group and Vedanta Ltd’s projects in Kalinganagar and Niyamgiri, respectively, in earlier years.

For over 16 years now, villagers in Odisha’s Jagatsinghpur district have been resisting attempts to establish a large industrial project that could generate thousands of direct and indirect jobs and boost the local economy.

The region has attracted companies because it is suitable for heavy industry, given its location along the eastern coast, proximity to coal and mineral ore deposits and railway and highway connections.

Between 2005 and 2015, locals fought a pitched battle against South Korean steel giant POSCO’s efforts to build a $12 billion integrated steel project in the district. Hundreds of them were named in over 400 allegedly fabricated cases, and many arrested and jailed. In 2013, the government forcibly acquired land at the site, drawing a sharp rebuke from UN human rights experts.

But the anti-POSCO movement stayed on course and non-violent, garnering support from activists and civil society groups across the world. Eventually, after confronting many judicial and regulatory hurdles, POSCO exited the project in 2015-2016, marking a huge victory for the movement.

The victory was short-lived. In 2017, the Odisha government approved a proposal from JSW Utkal Steel Ltd to set up an integrated steel plant with a captive thermal power plant, cement grinding unit and jetty on the same site.

But like in the case of POSCO, local villagers are strongly opposed to the plan. Since the project’s announcement in 2017, they have organised numerous rallies and demonstrations, saying they did not want the project and raising slogans such as ‘Jindal Go Back’ and ‘Navin Patnaik hay hay (shame shame).’

These protests reprise resistance against large industries in other parts of Odisha, such as Hindalco Industries Ltd’s bauxite mine in Koraput district in recent months, and Tata group and Vedanta Ltd’s projects in Kalinganagar and Niyamgiri, respectively, in earlier years.

Although the government claimed these industries would fuel development and generate jobs, locals opposed them fearing displacement, land alienation and loss of livelihoods.

Recent weeks have seen a sharp spike in confrontation between the state and villagers opposed to the JSW project in Jagatsinghpur. They were triggered by demarcation of limits for new revenue villages in the project area conducted by revenue officials at end-November amid heavy police deployment.

Locals alleged new villages were being carved out of existing hamlets to divide people and fracture the movement, and demonstrated in large numbers before revenue officials and police officers who visited the site for demarcation work.

Subsequently, hundreds who participated in these protests were implicated in allegedly fabricated cases, and police pickets are currently in place on all three roads entering Dhinkia village, the epicentre of the anti-Jindal movement.

This reporter visited Dhinkia and other villages in the project area and spoke to multiple stakeholders to understand why locals were opposed to the project, and how the efforts to facilitate it differed from the POSCO venture, and if JSW could be held accountable for alleged human rights violations. 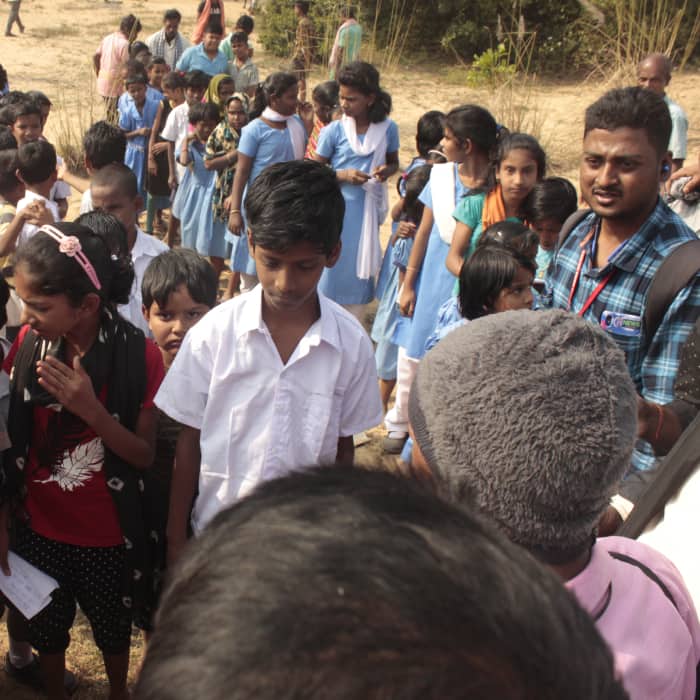 Children speak to local journalists during a protest in Dhinkia

JSW Utkal, the project proponent, is a subsidiary of JSW Steel that is part of the JSW Group, one of India’s largest conglomerates with interests in steel, energy, infrastructure, cement, paints and other industries.

JSW Steel has an installed crude steel capacity of 18 million tonnes per annum (mtpa), which is expected to reach 30.5 mtpa by 2024-25 courtesy the expansion of existing proejects.

The planned new project in Jagatsighpur is of immense strategic importance to the company. Connected with JSW Utkal’s proposed 30 mtpa iron-ore grinding plant in Odisha’s Keonjhar district via a 312 km-long slurry pipeline, it will add another 13.2 mtpa to the installed capacity.

The 52 mtpa captive jetty located near the mouth of Jatadharmohan river creek will also cater to the import and export requirements of the company.

The project requires around 2,950 acres of land, including 2,700 acres acquired by the government for the POSCO project in 2013 and subsequently transferred to the Indian company. At present, this land sustains thousands of livelihoods, locals said.

“Since no construction activity commenced after the government acquired our land, we continued farming there, and many people who live in neighbouring villages come to work in our betel farms and paddy fields. Many of us are also dependent on fishing. We will all be finished if the project comes up here,” Muralidhar Sahoo, an elderly local, told this reporter during a demonstration in Dhinkia on December 18. 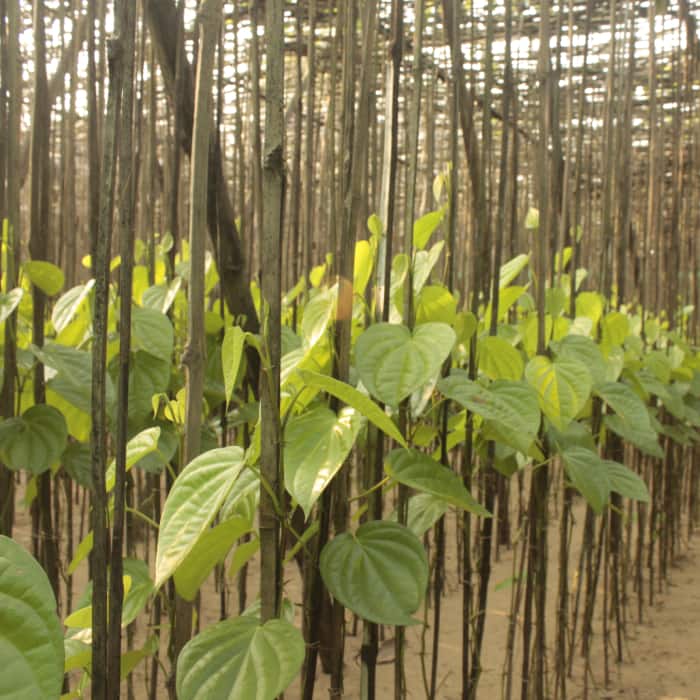 JSW has declared a rehabilitation package that it claims is better than that dictated by state policy, but it does not cover affected landless labourers and fisherfolk. It also claims the project can generate around 12,000 direct jobs, whereas locals see little benefit.

“The company may provide jobs to only a handful of us, and that too after selection and training in Bellary, it says. But the project will last only 30 years – what are we supposed to do after that? Plus, it will destroy the environment,” said an angry Goutam Das, who was also present at the protest site.

“The dhan-pan-meen (paddy, betel vines and fish) that we grow here has sustained us for generations. We will not let the project come up at any cost,” added Dhinkia resident Ranjan Bar.

There are two key differences in how the JSW Utkal project is being facilitated compared with the botched POSCO project.

The first relates to addressing environmental concerns around the project. On paper, JSW Utkal requires less forest land compared to POSCO, but activists said this is misleading.

“The POSCO project included a captive mine, whereas JSW is showing the mine and the steel complex as separate projects. Even the Environment Impact Assessment for the project was divided into three parts – covering the iron-ore mine in Keonjhar district, the steel plant in Jagatshinghpur district and the slurry pipeline from the mine to the plant separately,” said Surya Shankar Dash, a Bhubaneswar- based activist and filmmaker.

The second difference pertains to handling opposition against the project. Locals alleged that in addition to implicating protestors in false cases and arresting them – like it happened during the POSCO venture -- the government was actively trying to create rifts among villagers and fracture the movement this time.

They referred to the recent decision to carve out Patana and Mahala, two hamlets of Dhinkia village, as separate revenue villages to buttress their point.

“Since the POSCO days, our village has been the epicentre of movement. But now, the government is trying to divide us – they are creating new revenue villages with a small population -- so they may be able to arm-twist the majority there into accepting the project,” said Dhinkia resident Debendra Swain, who heads the Jindal Pratirodh Sangram Samiti spearheading protests against the project. While JSW Utkal requires additional land in the area, Swain and others feared that once demarcation work in Patana and Mahala was completed, the government would organise separate palli sabhas (village assemblies) there and obtain people’s consent by bribing and intimidating them. They said some youngsters from these hamlets had already been threatened by the police.

Locals and civil society groups allege that much like POSCO, JSW Utkal’s project in Jagatsinghpur is marked by human rights violations. Such violations in recent weeks include registration of multiple, allegedly fabricated cases against villagers after protests against demarcation work in Patana and Mahala; destruction of betel vines and paddy farms in the project area; and restrictions on the movement of villagers in Dhinkia by using police pickets.

In response, Prabodha Acharya, chief  sustainability officer of JSW Group, claimed that barring Dhinkia, all other villages had accepted the project, and asserted: “We remain committed to ensure full compliance to the country’s regulation and our stated commitments.”

Emails sent to the company requesting details of steps taken to address alleged human rights abuse in the project remained unanswered. Its claims were fiercely contested by business and human rights experts.

“The project is set to destroy huge tracts of land inhabited by tribal villagers for generations. But free prior and informed consent of affected communities has been done away with. Community forest rights have been entirely undermined, and corporate encroachment of indigenous forest land is being encouraged and supported by employing brute force,” said Mumbai-based advocate Lara Jesani.

“The government must address the concerns of locals instead of using the police and state machinery against them, and JSW Steel must acknowledge and respect the rights of affected communities who are opposing the project instead of reducing it to a matter of compensation,” said Jesani.
Aritra Bhattacharya
Tags: #Jagatsinghpur #JSW Utkal project #Odisha
first published: Dec 28, 2021 03:11 pm