LIVE NOW:Join us for the exciting discussion with Danone on role of nutrition, protein in working proffessional's quality of life
you are here: HomeNewsBusinessEconomy

Despite GDP growing in the third quarter, the government now predicts the economy will shrink by a slightly larger margin of 8 percent in FY21, up from the earlier estimate of 7.7 percent. Economists say that this contrasting position in official statements springs from the fact that growth in key sectors are muted and COVID-19-related uncertainties remain strong.

Earlier this week, SBI had slashed its contraction forecast to 7.4 per cent from 10.9 per cent.

Despite growth returning to the Indian economy in the third quarter of 2020-21 (FY21), a sustained rise in Gross Domestic Product (GDP) is not guaranteed for the fourth quarter, which may again see a contraction of 1.1 percent, economists say. They add that a slow pace of recovery in key sectors such as manufacturing, financial services and contact-based sectors such as tourism, transport, and hospitality may further pull back the policymaker's hopes of having a lower contraction for the full FY21.

According to data released by the National Statistical Organisation (NSO) on February 26, India's GDP grew by 0.4 percent in the third quarter of FY21, after record falls in the previous two quarters. This ended the 'technical recession' - when real GDP declines for at least two consecutive quarters - that had gripped the economy after the onset of the COVID-19 pandemic and subsequent nationwide and regional lockdowns.

"The 2nd advance estimate for FY2021 less the data for the first three quarters released by the NSO, implicitly indicate a moderate improvement in GVA growth to 2.5 percent in Q4 FY2021, broadly in line with our own projection. Intriguingly, GDP is implicitly projected by the NSO to slip back into a contraction of 1.1 percent in Q4 FY2021, which may be an unintended consequence of the back-ended release in the Government of India's subsidies," Aditi Nayar, Principal Economist at ICRA, said. 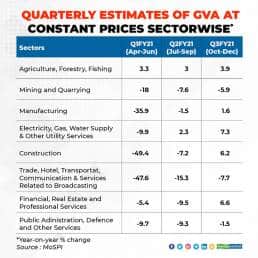 This was echoed by other economists who pointed out that the gamut of contraction in the preceding quarters was larger than initially estimated. "Along with third-quarter GDP estimates, estimates for the first and second quarters have also undergone changes, which suggest that the compression was sharper than earlier estimates, and recovery is also sharper than earlier estimated. The numbers for the fourth quarters of FY19 and FY20 will also undergo change along with the publication of fourth-quarter numbers for FY21. With these changes, the economy is expected to continue to show positive growth in the final quarter of FY21. However, imputed growth for the quarter comes out to be negative 1.1 percent," Devendra Kumar Pant, Chief Economist at India Ratings said. Likewise, quarterly GDP numbers for the first to third quarters of the current financial year gives confusing signals, he added.

On the other hand, growth in sectors such as construction and real estate offers some hope for growth. "A combination of low interest rates, stamp duty reductions in some states and the dealer discounts have pushed up real estate, and construction is largely government-led, if you look at the data from the central budget. Manufacturing has also moved into positive territory and it will most probably remain positive in the next quarter," D K Joshi, Chief Economist at CRISIL, said. However, unless contact-based services such as hotels pick up, which they are unlikely to until COVID-19 is stamped out, it may have an adverse feedback loop into manufacturing, he added.