Exclusive Webinar :Don't miss the latest webinar on Global Investing with Passive Products on June 22, 11am
you are here: HomeNewsBusinesscommodities

The momentum indicator Relative Strength Index (RSI) is at 51.78 which indicates neutral movement in prices.

Zinc prices edged lower to Rs 235.80 per kg as participants increased their short position as seen by the open interest. The base metal traded extended decline to trade at day’s low in the evening session on worries of tightening US monetary policy and weakening demand in top consumer China.

The value of June and July’s contracts traded so far was Rs 495.99 crore and Rs 4.12 crore, respectively.

The US dollar index traded higher at 90.03, up 0.07 percent against major currencies in the evening session.

Sunand Subramaniam, Senior Research Associate, Choice Broking said, “Fundamentally for the month ahead, we expect global and MCX Zinc futures to trade bullish after the reports of recovering economic data in the Asian markets and the United States. This is expected to increase the demand in the international markets as mining work and refined metal production is expected to rise.”

“Although earlier months have forecasted decline in production with the fall in demand/usage of metals and ores. But then, we are also forecasting demand to remain strong especially in China and other Asian countries with positive economic reports. Expectancy for higher demand for steel for E-vehicles to support prices as well”, Subramaniam added.

The non-ferrous metal has been trading higher than 20, 50, 100 and 200 days' moving averages but lower than the 5-day moving average on the daily chart. The momentum indicator Relative Strength Index (RSI) is at 51.78 which indicates neutral movement in prices.

MCX Zinc has been trading with marginal negative bias. If prices resist below Rs 237.5-238.2 levels we may expect the market to decline during the evening session, testing Rs 235-234 levels on the downside. 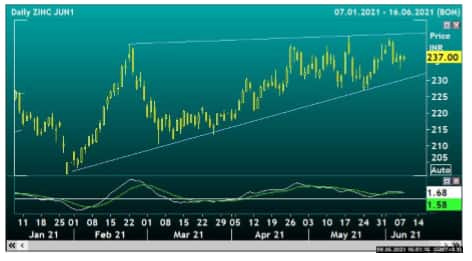