At present there are about 12 such brands. As per data from market intelligence firm JATO Dynamics, there will be 20-25 launches by over 10 carmakers until 2023, which would be priced in the range of Rs 7.5 lakh to Rs 2 crore.

The new EQS from Mercedes-EQ.

Even though the retail prices of electric vehicles (EVs) are yet to come on par with the traditional ones that run on petrol or diesel, carmakers across the board are not shying away from jumping on to the bandwagon and are lining up at least one zero emission vehicle as part of its future product plans. This is despite the fact that currently there are only 1,742 public charging stations across the country to serve one million EVs (including two-wheelers).

As per data by market intelligence firm JATO Dynamics, there will be 20-25 launches by more than 10 carmakers until 2023-end, with products ranging from Rs 7.5 lakh right up to Rs 2 crore. In 2022 itself, some of the most awaited electric cars include Tata Altroz EV, Mahindra eKUV100, MG ZS EV, Mercedes Benz EQS sedan, Volvo XC40 Recharge, Ford Mustang Mach E, (company officially exited India), Kia EV6, as per JATO Dynamics.

Mahindra & Mahindra (M&M) has recently announced that the company will unveil its first-ever born-electric concepts (platforms developed specifically for e-cars from scratch) on August 15, 2022. The announcement is in keeping with the company’s plans of unveiling a product around Independence Day per year. Apart from the above, M&M has also lined up eXUV300 (estimated to be priced at Rs 14 lakh) and Mahindra eKUV100 (Rs 8 lakh estimated price) for next year.

Veejay Nakra, President, Automotive Division, M&M Ltd, when queried about the company’s EV plans, maintained that it does have plans to launch electric drivetrains of existing models but all its announcements are reserved for August 15.

Incidentally, Volkswagen and Mahindra & Mahindra Ltd (M&M) are also exploring the use of the former's Modular Electric Drive Matrix (MEB), an all-electric platform, for sourcing electric components such as electric motors, battery system components and battery cells for Mahindra’s new ‘born electric platform’. Incidentally, VW is also believed to be bringing in its compact electric SUV ID.4 to the country next year, as per multiple media reports. Once that is done, it would be the German carmaker’s first EV offering in India. 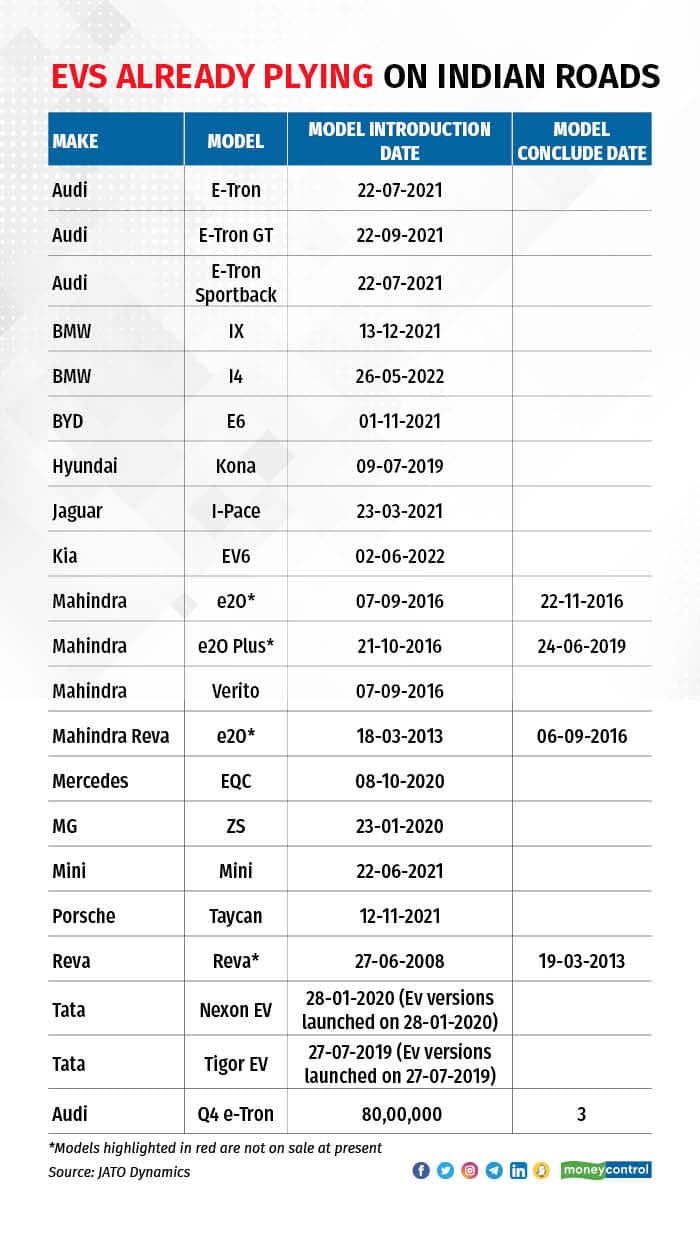 Without confirming the development, Volkswagen Passenger Cars India spokesperson when asked by Moneycontrol.com, said, “Mass electrification is still at a nascent stage in India. We intend to start?) the test of our electric cars in India later this year and the results of the same will define the next steps.”

Hyundai Motor India Limited (HMIL), which has committed to expand its battery electric vehicle (BEV) range to six models by 2028, has reconfirmed its plans to roll out the all-electric Ioniq 5 in India in the second half of 2022. Expected to be available in two battery packs — 58kWh and 77.4kWh — this e-car will have an expected price tag of Rs 40-50 lakh.

The Hyundai India spokesperson, when contacted, confirmed that its launch plans for Ioniq 5 remain on track for this year. Interestingly, Hyundai Ioniq 5 will also be the company's second EV in India after the Kona EV, and is expected to be following the completely knocked down (CKD) route, and would be assembled at the company's Chennai plant.

Hyundai’s sister firm Kia India, which has just launched the EV6, is now looking to widen its portfolio of electric cars, including a ground-up India-specific sport utility vehicle (SUV). There is also a lot of buzz that the South Korean carmaker is interested to bring the entire EV series, which includes the EV4, to the Indian market.

“As I mentioned the other day, that we are firming up our plan and will come back once we have finalised it,” maintained Kia India Vice President & Head of Sales and Marketing Hardeep Singh Brar, when queried by Moneycontrol.com. 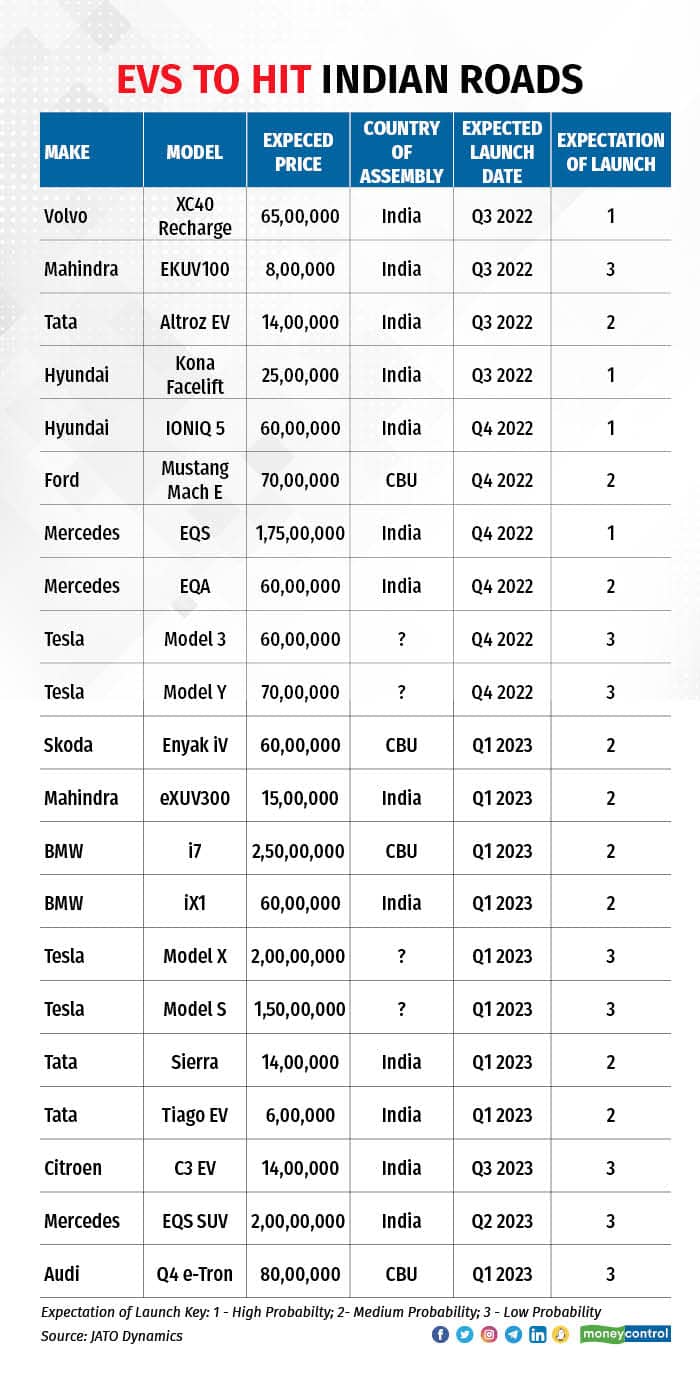 MG Motor India too, which already sells ZS in the domestic market, is now gearing up to roll out a Rs 10-15 lakh e-car, which is currently undergoing test runs, for next year. The company spokesperson, when contacted, confirmed the development, stating, “Yes, our Urban Smart Mobility car will be priced between Rs 10-15 lakh and we are planning to launch it next year.”

Nissan Motor India is also keen to launch the Leaf EV in India though the company is tightlipped about it.

In the luxury car space, Mercedes-Benz India has revealed the launch timeline of the EQS electric sedan for this year.  To be rolled out in India in October 2022 at an estimated price of Rs 1.75 crore, this will be the German luxury carmaker’s second EV launch after EQC in 2020.

“Electric is the future and we have a very attractive portfolio of world-class EVs available with us globally, and many of them will find their way to the Indian market. There is a very high level of awareness and interest around the EQS amongst potential customers. We expect the EQS, the first true blue luxury EV that will be ‘made in India’, to be the game-changer in the luxury EV segment,” revealed Martin Schwenk, Managing Director and CEO, Mercedes-Benz India, in response to queries sent by Moneycontrol.com.

Another luxury carmaker Volvo Auto India has announced that its maiden electric model- XC40 Recharge will be the first luxury e-car to be locally assembled in the country. To be launched in July 2022, the electric SUV is estimated to be priced at Rs 65 lakh. Also on the anvil is the C40 Recharge, which will be assembled locally and launched in the Indian market for Rs 74-75 lakh.

“Globally, electric cars will account for 50 percent of our total sales by 2025, and by 2030, it will be 100 percent of our entire sales. We expect our Indian operations to follow a similar trend and will definitely be lining up multiple rollouts to be in be sync with our long-term goal,” stated Jyoti Malhotra, Managing Director, Volvo Cars India, while talking to Moneycontrol.com.

All eyes are on Maruti Suzuki’s maiden made-in-India car, which is estimated to be priced under Rs 10 lakh, and is slated for a rollout only by 2025. Tata Motors is also expected to roll out the electric variant of the Tiago hatchback, which is estimated to be priced in the range of Rs 6-8 lakh. The spokespeople of both the companies, when contacted, refused to comment on future product plans.

“Climate change is a serious issue facing the policy makers. The policy signals are clear that CO2 norms will continue to be tightened. Tighter fleet CAFE targets and Worldwide Harmonised Light Vehicles Test Procedure (WLTP) regulations are on the horizon. In order to meet the obligations, OEMs are evaluating alternatives. Also, many governments across the world are announcing deadlines to stop selling fossil fuel vehicles. This is a global trend and all OEMs are building this into their product plans. They are preparing for growth in EV sales like in China and Europe That is why they are working to add more products," stated Ravi Bhatia, president at JATO Dynamics.

While the number of EV rollouts is unprecedented, India needs about four lakh charging stations to meet the requirements of two million EVs (including E2Ws) that could potentially ply on its roads by 2026, says a Grant Thornton report.