Lepakshi is a great day-outing from Bengaluru â€“ an amazing drive with family or a bike-ride with friends. All you need to do is drive past the Bengaluru airport to Devanahalli, past Chikkaballapura to Lepakshi.

Around 120 kms from Bengaluru, nestled in a quiet little village, is an unexplored temple with amazing artistic architecture. The temple called Lepakshi temple, dates back to the 16th century and has some fascinating facets and stories attached to it – the first one being a story behind the name Lepakshi.

Let us travel to the era of Ramayana –the time when Sita got kidnapped by Ravana, As she was being carried away, a bird by the name Jatayu tried stopping Ravana.

In the process, it got wounded and fell down on earth at this very place. When Lord Ram found him wounded, he blessed him and uttered the phrase – “Le Pakshi”. Le Pakshi in the local language Telugu means “Rise Bird” and thus, the name to this village.

As you enter this village, you will first behold a huge sculpture of the bull – Nandi. The magnificent Nandi scales to around 4.5m in height. This lovely sculpture is monolithic – made out of single rock granite and is believed to be the second largest monolithic Nandi in India.

The Nandi faces the Shiva-Linga that is surrounded by the huge Naga within the main temple.

A walk away from the Nandi is the main Lepakshi temple. Quite unlike the other temples, this one is devoid of large crowd and is quite calm and serene. The temple is functional and you will find a few people around for some poojas and worship.

It is said that the temple was built by two brothers – Virupanna and Veeranna, who were both courtiers of the Vijayanagar Kings.

One of them was accused of having looted the treasury of the Kings to make this temple and as a punishment to his crime, had blinded himself at the temple. Folk lore has it that the marks of his bleeding eyes can still be seen within the temple as two red stains on the walls. You might just want to keep an eye and spot the same.

2) Pillars within the temple

On entering the temple, the first thing that catches your eye are the ornate pillars. There are 70 odd pillars in the temple, each one with its own story. 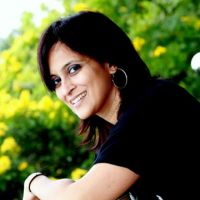 Each pillar has beautiful carvings of Gods, Goddess’ and Nymphs in various poses and activities. Notice the intricate details of the carvings –the eyes, the jewels, the perfect poses and postures.

It feels as if each sculpture is telling you a story of its own. Don’t be surprised if they mesmerize you and draw you from pillar to pillar – so much that you end up spending most of your time just trying to absorb them in.

Look out for the unusual hanging pillar that hangs inches from the ground. If you have a newspaper or a scarf, you can slide the same under it to see it come out from the opposite side.

4) Murals on the Ceiling at Lepakshi

While you are busy looking at the pillars, remember to glance up and see the gorgeous painted ceiling. The paintings are done with vegetable colors and each mural is a description of a scene from history – be it from the Royal courts or from the Hindu mythology.

The inner sanctum has an idol of Lord Shiva to whom this temple is mainly dedicated to. Besides this main sanctum, there is another one which is dedicated to Lord Ganesha.

Within the premises, is one giant footprint – said to be that of Sita. The big toe of this footprint is perpetually filled with water – making this yet another fascinating feature of this temple.

As you circle the temple.eventually, you will finally end up at the open air KalyanaMantappa or the area for religious ceremonies.

Legend has it that the marriage of Lord Shiva- Goddess Parvati took place at this very spot and hence this unfinished, marriage hall is dedicated to them.

Beautiful pillars – some erect, some fallen, occupy this area. Despite the fallen ones, one cannot miss the divine beauty and artistry of these pillars. Each one blends into the atmosphere to mesmerize you and create an unforgettable landscape.

Lepakshi is a great day-outing from Bengaluru – an amazing drive with family or a bike-ride with friends. All you need to do is drive past the Bengaluru airport to Devanahalli, past Chikkaballapura to Lepakshi.

The roads are excellent right upto the village. While planning a trip here, remember that Lepakshi is a small village and there aren’t any well-known restaurants or hotels here. Hence, it is best to carry your own food or plan to have the same on the highway, before the Toll gates.