Mili Sarkar, the village teen in the viral ‘sari-back-flip’ video, was once a TikTok star

An intimate conversation with the 17-year-old village girl Mili Sarkar whose Instagram video doing gymnastics in a sari is going viral.

Mili Sarkar, the 17-year-old whose Instagram video of her doing a back flip in a sari has gone viral on the internet, is glad her sister suggested she try doing gymnastics in a sari.

“I don’t usually wear saris, but it turned out to be a good idea,” smiles the teenager, who lives in Raiganj, a village of about 2 lakh people in West Bengal, and is passionate about dancing. Her video has been viewed millions of times on several platforms after various celebrities shared it on Twitter. Mili isn’t aware of many of them.

The young dancer is no stranger to internet fame. She had 7 lakh followers on her Vigo account, and then — noticing that all her friends were moving to a new short-video platform — she started all over again on TikTok and garnered another 7 lakh followers there too. After both apps were banned in India, she moved to Instagram. “I don’t usually wear saris, but it turned out to be a good idea,” says Mili Sarkar

Though Mili was always dancing as a child, she was inspired to shoot videos five years ago. She owned a basic camera phone by then, so she began making videos of herself dancing, aided by her sister Shivli, now 22, who is also a makeup expert.

Mili taught herself how to edit the videos and began uploading them on Vigo. A digital native, like any teenager around the world, she quickly got a hang of what went viral and what didn’t.

When she noticed that her yoga and gymnastic videos got more attention, she signed up for formal yoga classes in a nearby village. Her father works as a driver and her mother is a homemaker, and both are supportive of their daughter’s talent, especially since her father had similar interests in his youth. Her older brother too works to support the family.

After two years of studying yoga, Mili had to drop out because the family couldn’t afford to pay the fees. “The madam (teacher) said she wouldn’t give me my prize certificate until I didn’t pay her,” Mili says in Hindi, a language that is common in her district and is taught at school. She doesn’t speak English, but knows just enough to get by on social media.

The Vigo platform managed to earn her a source of income through meetups and sponsorships. With the money she earned, she bought herself a new phone, lots of clothes, makeup and accessories, and could make better quality videos. She also set up a YouTube channel and started doing longer music videos.

“But we live in a village and there aren’t too many places to do good shoots at, so I don’t post too much on YouTube; it requires more work,” says Mili, who has travelled as far as Maharashtra for participating in dance competitions; she has also won several prizes.

Having completed her class 12 this year during the pandemic, Mili took admission in for BA general studies, but since colleges are still shut and not conducting classes in her area, she has plenty of time on her hands to focus on her dance and videos. 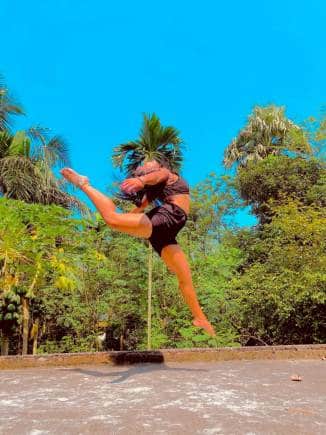 This year, she joined up for formal dance classes in Siliguri, a distance of more than 150 km away. It takes six hours one way on a bus to get there, and Mili takes her mother along.

This year, she joined up for formal dance classes in Siliguri, a distance of more than 150 km away. It takes six hours one way on a bus to get there, and Mili takes her mother along. After a full day of class, they spend the night with relatives there, and come back the next day. The routine is repeated every week.

Just before the lockdown this year, she had got offers from video production agencies to make videos for Tik Tok. But after India banned Chinese apps, Mili — like lakhs of other rural Indians — lost their source of livelihood.

So far, Instagram has not been fruitful monetarily or in terms of generating lakhs of followers (“Only 12,000 or so,” she says, dismissively), though it has gained her mainstream attention.

While her bio says she is into yoga and gymnastics, Mili — who will turn 18 in January — says she is a dancer at heart, and wants to make a career in the entertainment industry. She brushes off all the sexist comments and trolls on her account. “Let them say what they want,” she says, shrugging it off with all the wisdom of an Internet teen sensation.

She is enjoying the attention she got from her sari video — “My uncle and aunty in another village saw it in the news and called to tell us about it” — and has planned more sari stunts. “Itna mushkil nahi hai (it’s not so hard),” she giggles.