India’s original ‘Made in India’ textiles and handlooms have been hit hardest by lockdown. These three social enterprises are doing their bit; they need our support.

On July 27 and August 3, 2020, just days shy of the sixth National Handlooms Day celebration, the Union Minister of Textiles announced that the government would be abolishing the All India Handicrafts Board and the All India Handloom Board. These bodies, set up in 1952 and 1992 respectively, served as advisory bodies presenting the issues and concerns of the weavers and handicraft communities to the government.

Like many other government bodies and focus groups, they too suffered their fair share of problems, with their purpose being diluted and lost amidst battles for power, awards and red tape. Yet the ‘abolishment’, rather than renewal, raises multiple questions about the ruling government’s new motto of atma-nirbharta (self-sufficiency) and being ‘vocal for local’.

Laila Tyabji, chairperson of Dastkar, an NGO that has worked towards empowerment of crafts and craftspeople since 1981, took to social media to express her thoughts. “All these years on, it remained the one official forum, however watered down, where the voices and views of weavers and craftspeople could be expressed directly,” she wrote.

Following this announcement, social media was flooded with the hashtag #VocalForHandmade. The problem with such social-media activism is the lack of actual action to accompany it. Raising awareness through tweets and posts cannot substitute being responsible citizens and taking action in real life.

After agriculture, the textile and handloom industries are the largest source of employment across India. Over the past several decades, they have battled numerous challenges, from unscrupulous middlemen and predatory retailers, to migration of the youth to urban centres away from their family vocations.

But the current coronavirus pandemic has exacerbated their woes. The colossal dip in economic activity and customer demand has made it difficult for them to stay afloat.

In such a time, instead of just being #VocalForLocal, we need to go the extra mile and #BuyLocal. Here are the stories of three enterprises working at the grassroots empowering traditional crafts and craftspeople, who are facing a huge challenge during the economic slowdown and lockdown. 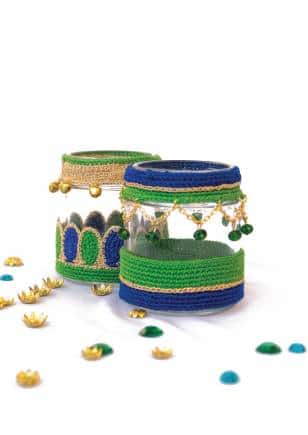 Operating out of Mumbai, Pune and Surat, Happy Threads works towards uplifting the lives of talented, skilled and hardworking women, and helps them with a source of income from home-based occupation.

Established in 2016, they are now associated with over 1,000 women artisans from different locations who make products across six categories including home décor, soft toys, stationary, tote bags and accessories.

The concept came into being when Dr Syedna Mufaddal Saifuddin, the spiritual head of the Bohra Muslim community, visited Burhanpur in Madhya Pradesh and was presented with homemade papad (crispy snack) by a local girl. When the world-respected community leader enquired further, she said her mother made them and earned Rs 100 per day. Dr Syedna was very concerned as these earnings were insufficient to support an individual let alone a family.

Thus emerged the vision to help women in the community earn funds through their age-old crafts and existing skills. Since crochet was the most prevalent skillset amongst them (men in the Dawoodi Bohra community traditionally wear intricately crocheted caps made by women in their families), it was taken forward as the primary means of entrepreneurship.

In the first year itself, over two lakh floral bookmarks were crocheted by the association of women artisans and circulated by the organisation through a series of coordinators and volunteers.

More products were developed. The first sales happened through informal international channels in Florida, USA, and then realisation dawned that domestic markets could be larger and more successful.

The artisans at Happy Threads are women who seek livelihood enhancements but are also interested in the creation process and being active contributors to their family earnings. Some did not know crochet but joined the organisation and acquired the skills.

Others already had the skills but wanted to upgrade, while there was also a section of expert craftswomen who sought a good platform to display their products. Most of them are homemakers and view Happy Threads as a means through which they can contribute to their families.

They faced several challenges such as having to compete with cheap mass manufactured products; the intricate labour-intensive nature of their craft keeps volumes relatively low.

The unanticipated lockdown due to the COVID pandemic further led to a sudden fall in demand. Reduced number of social gatherings meant low gifting opportunities among potential customers, exacerbated further by economic slowdown and income cuts. This called for a realignment of strategy.

One of the first steps taken was to introduce environment-friendly, sustainable face-masks. The use of e-commerce and social media was also pushed for, and instead of solely operating independently, Happy Threads began to align itself with other enterprises and websites, such as World Art Community, Limeroad and others.

They decided to use this time to streamline backend processes, and are now ready with their festive collection editions for Diwali and Christmas, well in time.

Further, all communications have been moved to virtual platforms. Artisans are being regularly contacted through messages and video calling. Recently, they organised a virtual training session for artisans in Chhattisgarh under the National Rural Livelihood Mission scheme supervised by a trained artisan and two designers.

Despite the challenges they have faced during the lockdown, from logistical problems to issues with procuring raw materials and delayed deliveries, they remain focused and optimistic about their future.

“The agenda is to generate a steady stream of sales, increase the volume of work to the artisans, and of course increase the number of artisans that we reach out to,” says spokesperson Tasnim Sabuwala. 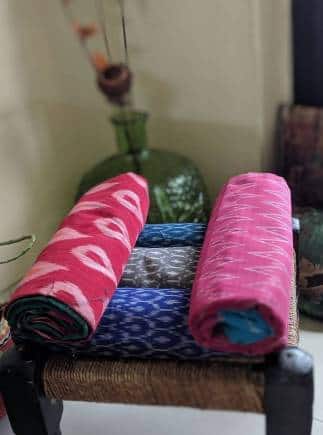 Forsarees is a Mumbai-based organisation that celebrates Indian craft and handlooms, bringing them to urban customers directly from weavers’ homes. The objective is to develop weaver entrepreneurs who can directly sell through an e-commerce platform ensuring they enjoy higher margins by removing supply chains.

It was founded by Ritu Oberoi, who had worked in the media and entertainment industry for 15 years. During a sabbatical from her last role at ABP News, she went travelling and exploring the country.

During one such visit, and after a few interactions with weavers, she realised the urgent need for a bridge to connect them directly to urban consumers. Hence, the idea of Forsarees came up and she quit her job. She never looked back.

After a year of research and coordination with weavers, the e-commerce website was launched in 2018.

Their goal is two-faceted; popularising Indian art and craft forms as well as ensuring steady and sustained incomes to weaver communities and households through monthly projects. They usually work with independent artisans and weavers or self-help groups working with rural artisans to revive crafts.

They have successfully associated themselves with around 25 such families and communities impacting more than 500 individuals. The weavers hail from traditional crafts clusters in Kutch, Ajrakhpur, Maniabandha, Sambalpur, Burdwan, Pochampally and Chanderi. They also work with women from villages near Shantiniketan for their kantha project.

A lot of research and travel goes into getting a new cluster of weavers on board. The pandemic has brought additional difficulties as non-essential purchases have been limited. Moreover, handloom has been challenged in the past few years by fast fashion, which has a price-point advantage so the sales have been affected badly, and weavers have been facing extensive hardships.

The lockdown has brought with it a high sense of insecurity amongst the weaver communities, and lack of production materials has affected overall production.

However, the team behind Forsarees remains optimistic that e-commerce will continue to be preferred in a post-COVID world, and are looking to invest into expanding their categories from fabrics to home decor and utility-based artistic gifts in the near future.

Working closely with weaver teams and helping them get through these adverse times by providing projects, insights and knowledge enhancements has been their key focus during these times. 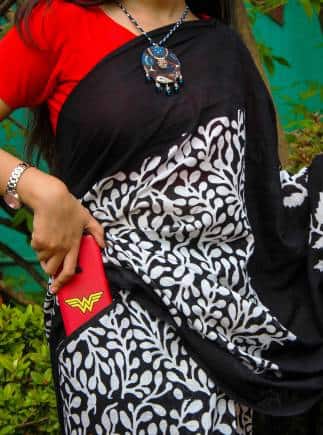 AseemShakti is a social startup based out of Mumbai that was launched with the aim to get more women involved in the formalised workforce. Their goal is to generate 10,000 jobs by 2025 for women and other vulnerable sections of the society through their various ventures. Currently, the team makes functional clothing, including shirts, kurtis and their unique instant-wear sari for working women.

The organisation started out in the form of a small women’s self-help group in 2016 in Swati’s neighbourhood. Realising that the concept could help thousands more, she launched AseemShakti in 2018. Her patented ‘instant-wear sari with a pocket’ was soon one of their best-selling products.

Swati’s other ventures include AseemBharat, The Good Fashion Fellowship, and AseemShakti Fellowship, all with the aim to provide financial independence for women as well as creating a community for them to meet like-minded people and feel a sense of belonging.

“While financial independence can provide a sense of confidence, happiness goes beyond that. Being able to share problems with a community that understands you; to be able to be yourself and be accepted and understood – these are the things humans crave for and often institutions like the workplace, and even schools and colleges provide this comfort,” she explains.

The organisation hence works towards creating opportunities, both financial and community-based, for those who have been neglected by society and denied these opportunities, especially women from urban slums and lower-middle-class families.

The current pandemic situation has hit them hard. Within three days of launching their website, the countrywide lockdown was announced. Their factory was in a containment zone and since local Mumbai trains stopped functioning, they had no access to it.

They were hence forced to shut all operations. “It was like a nightmare,” says Swati. It is only now, after four long months, that they have slowly re-started operations. In the meantime, they focused on fundraising for future projects.

While following WHO guidelines for COVID and taking all the necessary safety precautions, the women workers also moved operations digitally. They began using WhatsApp calls to communicate and watching YouTube tutorials on how to sanitise their workplace and how to make masks for sale.

“Four months of no salary and no rent, but nobody, not a single person from my team, or even our landlord, asked me for it or bothered me,” shares Swati.

Being a woman entrepreneur often means that one is not taken seriously by vendors, banks, families or investors, says Swati. In such a scenario, raising finances and getting a collateral and guarantor-free bank loan were their biggest challenges. They try to keep costs as low as possible, even if they have to buy the cheapest train or bus tickets for going to official meetings.

Their next ventures The Good Fashion and AseemVyapar look towards overcoming challenges on a community level for women. “Often, entrepreneurs only care about their own brand. But if we broaden our vision and come together as a community, we would save ourselves a lot of time and money,” she says, adding that the lockdown has given them a good opportunity to plan for the future.