Upcoming Webinar:Join us for 'The Future Techshot' on Sept 22, 10:30am to gain insights into role of tech in streamlining businesses. Register Now!
you are here: HomeNewsTrendsFeatures

Within three months of its launch, Hargol’s Biblical Protein locust-bars are swarming in Israel and the United States, the first importing country.

The world’s first commercial grasshopper farm is a 2.5 hour drive north of Jerusalem.

“Why join the navy when you can be a pirate”. Dror Tamir’s Whatsapp status is extremely beguiling. But Tamir does not wear an eye patch. He sings no peans to pirates and bounty hunters. Instead, in his deep sonorous voice he alludes to grasshoppers and John the Baptist in the same breath. And in a hasty interlude establishes the theory of Biblical Protein, a potent locust-protein mentioned in The Bible.

Amidst mounting hatred for the 2-gram locusts swarming in the Indian skies, Tamir’s locust love seemed shrill. But over the 4,304-kilometre long-distance call (that’s how far Jerusalem is from Goa), I listened intently to Tamir. I had to. After all the Israeli entrepreneur, CEO and Co-founder of Hargol FoodTech, owns the world’s only grasshopper commercial farm. He rears locusts (locusts are grasshoppers). Yes, 20 tonnes of locusts annually in his 1,000 sq metres production unit and turns the insects into energy bars. Biblical Protein bars. 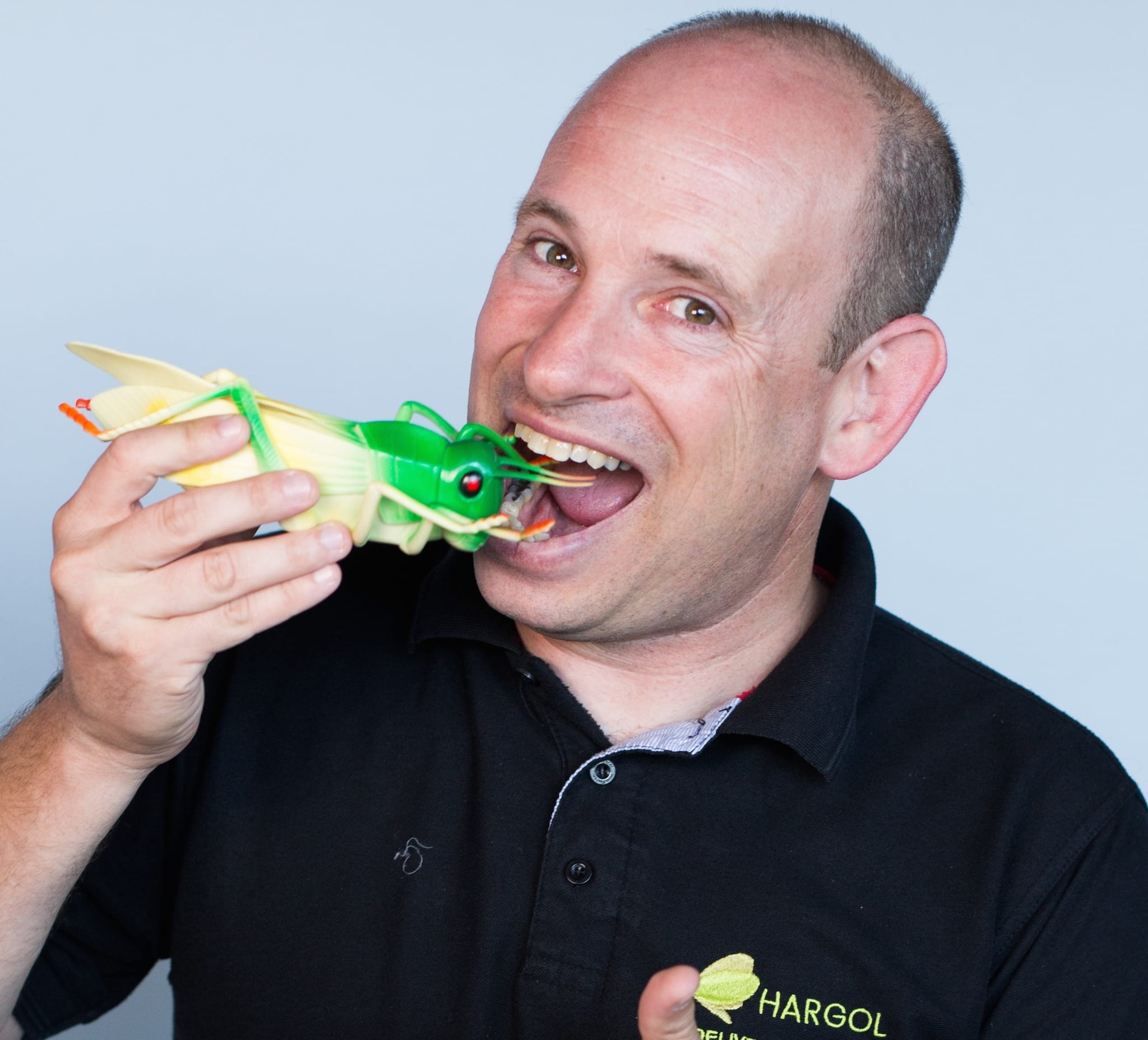 Before I could breathe a locust+John the Baptist question over the phone line, Tamir dropped a gourmet fact - the saint’s favourite food was locusts dipped in wild honey. How was he privy to John the Baptist’s menu? I was about to smirk but had to quickly hide the fledgling smile when Tamir quoted from The Bible: “Now John wore a garment of camel’s hair, and a leather girdle around his waist; and his food was locusts and wild honey”. (Matthew 3:4).  So, John the Baptist did savour locusts that have up to 70 percent protein content, contain all essential amino acids and are very low on saturated fat and cholesterol.

Tamir is so captivated by grasshoppers that he christened his company Hargol (literally, long-horn grasshopper in Hebrew). The company’s punchline: Delivering Protein. He trudged through wilderness in Israel to find locust eggs for his first commercial grasshopper farm. He started with 20 grasshopper varieties but soon realised that only 4 were commercially viable. Today, inside his farm, millions of grasshoppers feed on wheatgrass and are later harvested to be dried and turned into energy bars in different flavours - Plain, Apple, Raisins. Gummy bears (gummy locusts, actually) are coming soon.

On an average, locusts are available for roughly 4-6 weeks in a year. But in Tamir’s farm, grasshoppers grow throughout the year. Without burdening the environment and with near-zero carbon footprint. When compared to beef, the protein-dense locusts use 1,500 times less arable land, emit 98.80% less greenhouse emissions and are the finest example of near-zero waste farming. Tamir, however, wanted to steep beyond the planet-friendliness of the locusts and added the Biblical twist as a well thought-out marketing plan - mentioned in the Quran, the Bible and the Old Testament, locusts are the only kosher and halal insect in the world.

“Worldwide, nearly 2.5 billion people eat insects, and grasshoppers top the list of edible insects. But I was not targeting the traditional insect-eaters. My eye was on the millennials,  the early adapters of any new/experimental food on the shelf. These days, the supermarket shelves are cluttered with competitors for their attention - crickets, algae, plant-based food. To stand out in the clutter, we came up with the Biblical protein idea,” Tamir said.

And the bait worked. Within three months of its launch, Hargol’s Biblical Protein locust-bars are swarming in Israel and the United States, the first importing country. The demand for dry locusts in a jar and dry locusts with wild honey from Israel combo is much more than Hargol Foodtech’s production capacity.

With locust-love spreading so wildly, Tamir plans to add three more commercial farms in 2021 and another 20 farms in 2022. Plans are afoot to export to Europe and Asia. India is also on his marketing map. Tamir is also researching on long-term and short-term solutions to the menace of locusts which is listed as the 8th of the 10 plagues mentioned in The Bible. When viable, Hargol’s easy to dry locust method will empower poor farmers to turn locusts into ready cash. 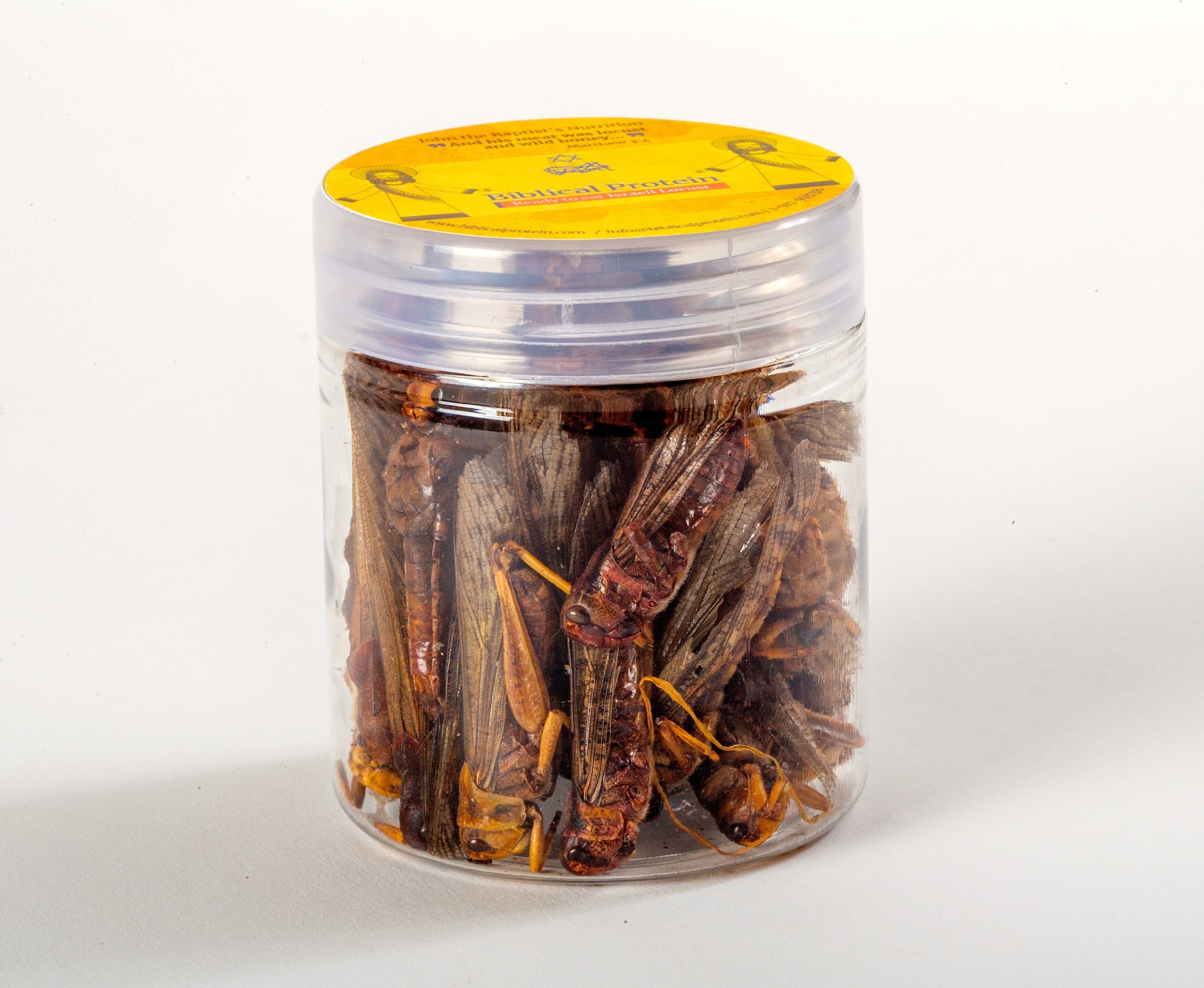 With the locust, saint, Biblical protein questions answered, a 2-gram curiosity was still swarming in my head. Tamir’s Whatsapp status: Why join the navy when you can be a pirate. “I did join the navy; I have served in the Israeli Navy. Never became a pirate, though,” over the 4,303-kilometre long-distance phone call Tamir guffawed. He’d rather talk bugs. Grasshoppers only.