Upcoming Webinar:Watch a panel of experts discuss: Challenges of continuously evolving regulation for Cryptocurrency, on 7th July at 3pm. Register Now
you are here: HomeNewsTrendsExpert Columns

As flights by airlines such as IndiGo, Vistara and SpiceJet gather pace, a look at those Indian airports that are the most  and least impacted.

July was the second full month of operations after domestic aviation restarted in India during the COVID-19 times. While June saw some uptick in traffic, July continued on the same vein.

Interestingly, July 2019 was also the first time when capacity was returning to normal after the fall of Jet Airways in April 2019 — making it a good month to benchmark on where the traffic is moving post-COVID-19. As the airline stocks gain momentum, it is worthwhile to see the traffic patterns and which airlines are likely to benefit from this.

As air travel restarted, it was first capped to 33 percent of the approved summer schedule and later increased to 45 percent. Yet certain states either capped the number of movements or simply banned flights from certain destinations. And this included Mumbai, the financial capital of the country and second-largest airport by traffic in India, which put a cap on the number of movements while West Bengal banned flights coming in from certain states that have a high prevalence of COVID-19 cases.

Which are the most impacted?

Unsurprisingly, everybody’s Goa plan was cancelled and that meant the airport was the most impacted when it came to air traffic movement. With most hotels still closed and the pandemic not yet in control - travel to Goa has taken a backseat. This was coupled with strict regulations in place at Goa - which for a while was without any active cases! The next worst affected destination has been Shirdi. The biggest attraction at Shirdi is the holy temple of Sai Baba which is closed due to COVID-19. This has meant that airlines have ignored flights to Shirdi and there has been little demand.

The other destinations which make it to the least of most impacted by air traffic movement are Kanpur - whose traffic is also catered by nearby Lucknow, Bhavnagar—which has monopoly operations by Alliance Air, Jodhpur and Udaipur—which are not exactly summer destinations in Rajasthan and Hubli, which relies a lot on operations under RCS-UDAN for traffic numbers.

Shirdi, Goa and Udaipur also make it to the list of airports that have lost maximum traffic by passenger numbers. WIth Mangalore and Surat being the other airports. These five airports handle less than 10 percent of passengers as compared to what they handled last July! While these are the most impacted, the metro cities of Delhi, Mumbai, Bengaluru, Chennai, Kolkata and Hyderabad have not been at their best. The operations in terms of Air Traffic Movement as well as Passenger Numbers have been revolving around 10 percent to 35 percent of last July, indicating that the metro airports are also yet to come near the 45 percent allowed schedule for airlines.

Which are the least impacted?

Surprisingly, a few airports recorded a jump in air traffic movements and passengers - Mysore being one of them. While the airport has flights under Regional Connectivity Scheme(RCS)- UDAN (Ude Desh ka Aam Nagrik), the jump is validated by the fact that all routes were not operational last July and airlines have opted to start RCS-UDAN routes. These routes come with subsidies from the government (at times) and also have a fare cap which is different than what the government has currently set for all operators. 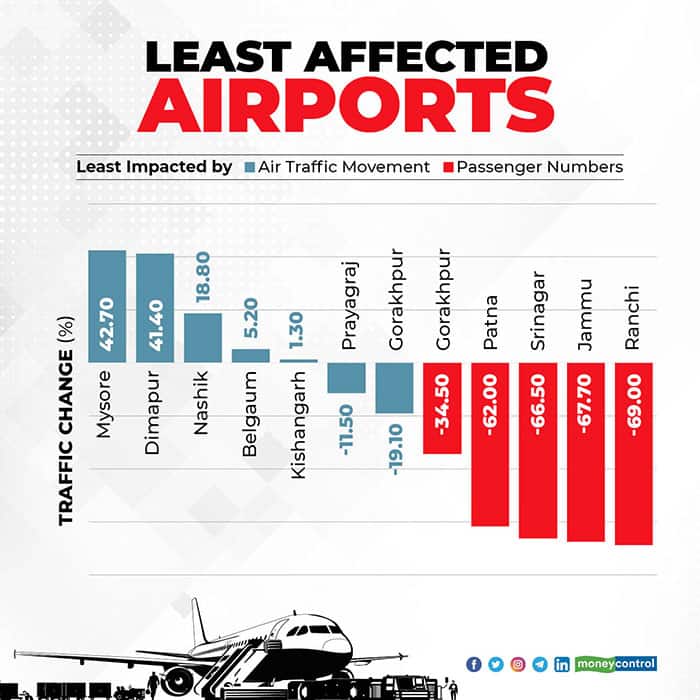 The least impacted cities by Air Traffic Movements (ATMs) have one thing in common and that is heavy concentration of flights and at times all of them being under RCS-UDAN. While some of these are also least impacted by passenger numbers, the real gems who have helped the passenger flows have been Patna, Srinagar, Jammu and Ranchi, punching above their weight to attract traffic like never before. Patna saw its traffic at 38 percent of what it was earlier. When one considers that only 45 percent capacity is allowed, the numbers mean a lot. Neighbouring Ranchi was not far behind, recording 31% of its traffic of what it saw last July. Both Jammu & Srinagar also fared well.

On August 24, the count of domestic flights crossed 1,000 daily departures. This is one-third of what it was pre-COVID-19. There is a long way to go to reach anywhere near the January numbers. Yet, airline stocks have started picking up as the recovery percentage goes up and so do the traffic numbers.

One has to see how airlines manage to tie up the much-needed cash to sustain another few months amidst rising numbers - of both COVID patients and travellers. The blessing in disguise has been relatively lower costs of fuel and the lower fare cap for few airlines, which could have been bleeding badly otherwise. Note: Only airports which have a scheduled daily flight and recorded over 50,000 passengers in July are considered for analysis to avoid outlier cases.