Oscars 2023 | Who’s the Indian cinematographer going to the Academy Awards second year in a row?

Karan Thapliyal's entry into The Elephant Whisperers — which has four cinematographers including him, the others are director Kartiki Gonsalves, Krish Makhija and Anand Bansal — coincided with Baby Ammu, the mischievous little orphan elephant in the Netflix documentary short film. So, all that cuteness and naughtiness that Baby Ammu brings to the film was caught on Thapliyal’s lens. Ammu would just be her playful self and Thapliyal would start rolling — no, it wasn’t as easy as it sounds. Ammu would be more interested in seeing the camera as a plaything. That a little elephant would lead this 6ft man a merry dance is as humorous as it is endearing.

One thing that this short film does is calm and soothe our racing urban nerves, with pure, earthy storytelling, slo-mo aerial and drone shots of green expanses, and the humour of the animal world and joys of simple living.

The Elephant Whisperers, directed by Kartiki Gonsalves and produced by Guneet Monga's Sikhya Entertainment Production, has been nominated for the 95th Academy Awards this week, it's one of the three Indian films to be nominated. It tells a layered story at whose centre are caretakers Bomman and Bellie and the orphan elephants Raghu and Ammu they adopt and raise, in Tamil Nadu's Theppakadu Elephant Camp, one of Asia's oldest.

Thapliyal, 37, is a Delhi boy, who always wanted to travel and explore the world. He could interpret ideas and stories into a visual form, and, perhaps, that’s how he stumbled upon cinematography in his film studies course at SACAC (Sri Aurobindo Centre for Arts and Communication), which would shape his thoughts and sharpen his vision.

Thapliyal has been shooting documentaries for the past 13 years. But a serious inclination towards documentaries only began in 2009, when he worked with a senior ethnographic filmmaker, Bappa Ray, initially as a second unit camera person and, later, as a cinematographer on diverse projects. And though he’s worked with only a few directors in his career till now, he has maintained a long-term collaboration with each of them. One such collaboration, over the years, has been with the Delhi filmmaker duo who took the first Indian documentary film into the final five Academy Awards nominations last year, Rintu Thomas and Sushmit Ghosh of Writing with Fire (2021) — the story of the women journalists of Khabar Lahariya — on which Thapliyal has jointly wielded the camera along with Ghosh.

The Elephant Whisperers was shot over several years, too. Initially it was Gonsalves and Makhija training the lens on the subject and, then, Bansal and Thapliyal hopped on to the project. Edited excerpts from an interview:

How does it feel to be back at the Oscars, for the second time in a row? Is the feeling any different now?

Oscars were quite an alien thing to me and I never ever gave any thought to it. But I think both the films are so relevant and are such amazing stories that they managed to captivate the audiences from across the world. It’s such a great honour to be nominated for the Oscars and I am glad that I was part of those documentaries. Last year was very overwhelming for me because it was the first documentary project from India that had reached the Oscars. This time, however, I was excited and nervous at the same time. But I am quite happy for the entire team to get this nomination.

Tell us about working on both the films, the experience, the pluses and minuses, the respective challenges of shooting both the films.

It was a great learning experience for me to be working on these two very diverse films.

Both of them are challenging in their own ways, which, at the end of the day, is the most exciting part of filming documentaries. Writing with Fire was set in the hinterland of Uttar Pradesh, where we were travelling with the journalists for hundreds of kilometres every day, in all sorts of local transportations or, sometimes, even on foot, to reach a certain remote village. Also, it was a tiny crew of just three people: Rintu (director and sound), Sushmit (director and cinematography) and I. So, even changing a camera lens while filming was a tedious task since you were carrying all the gear yourself and shooting simultaneously.

In Elephant Whisperers, we travelled down south, to the foothills of Nilgiris in the state of Tamil Nadu, which was like a completely different world altogether. The featured 'kids' in our film, Ammu and Raghu, were quite fun, but could often be unpredictable and get quite moody while filming as well. So, you naturally had to plan your shoot keeping that in mind. Moreover, filming in the forest demands a whole different level of patience and discipline. Karan Thapliyal with Baby Ammu during the shoot of 'The Elephant Whisperers'. (Photo: Kartiki Gonsalves)

How did The Elephant Whisperers come to you? Was shooting animals more challenging than humans?

When I received a call from Sikhya regarding this project, it was right after the first wave of COVID-19 which had brought the country to a standstill. Kartiki, the director of the film, shared a small teaser with me regarding a project which she has already filmed with Krish. I was just blown away with the visual style and how they had captured this intimate relationship between Bomman and Raghu.

I spoke with Kartiki immediately after watching that teaser and enquired on how she was planning to take the project forward and that's how I ended up shooting the film.

About shooting humans and animals, each have their respective challenges. At the end of the day, I believe it's my relationship with the person/animal who is in front of the camera. They should really be comfortable with me first, and it is then that you make them comfortable with the camera. It definitely takes time and patience, depending on the situation, but then, it's also highly rewarding.

Which portions of the film did you shoot?

My entry in the project coincides with Ammu's entry in Bomman, Bellie and Raghu's life.

Did the pachyderms welcome you? Tell us about the little adventures. And considering Bomman and Bellie only speak in Tamil, how would you communicate with them during a shot?

Each day of the shoot was a new adventure for us. There were days when Ammu was in a very playful mood and she would not let you film anything. She would just come around and try to take the camera away from my hands. Also, she would ask for goodies all the time…and we used to occasionally even carry fruits with us for this purpose. 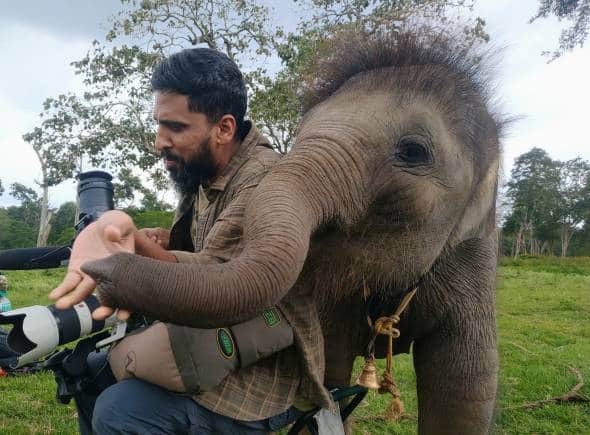 With Raghu and Ammu, I took my own sweet time to just observe their behaviour. For the initial few days, I would observe them from a distance and make myself familiar to them. And, gradually, we became very comfortable with each other.

Bomman and Bellie are very warm and friendly. We sure did have this language barrier between us but Kartiki was always around to help us bridge the gap and help us understand each other. I also picked up a few words and a bit of sign language to communicate with them whenever I was filming with them alone.

In both your Oscar-nominated films, the directors have manned the camera as well: Sushmit in Writing with Fire and Kartiki in The Elephant Whisperers. In what respect does it help to have a filmmaker around who's visually adept?

It helps you in many ways to have a director as a fellow cinematographer. You can communicate things in a much better way and they also understand the technical aspects of filmmaking much better. You also get to learn and understand so many things better when your director is filming with you simultaneously.

Will you stick to non-fiction or will be dabbling in fiction, too?

For me, shooting for any form, whether fiction or non-fiction, is a very intimate process. Non-fiction helps me travel to the most unexplored and beautiful places while also allowing me to meet amazing people on these journeys. This whole process of going into the unknown and learning new things about life and yourself is what makes it so fascinating for me. I like shooting fiction as well, but I dislike shooting in studios. I can't handle big crews on shoot. Documentary feature and documentary short — which format do you like better and why?

I like both. Definitely a longer format gives you more time and space to dive deeper into the story and explore the possibilities. Also, in documentaries, you don't have any script per se and you work around an idea in the given framework. So the longer format definitely gives you a broader scope to play around with the narrative.

Do you think it helped that Guneet Monga was on board The Elephant Whisperers and she's also an Academy voting member, did that make the journey of this film a little easier as compared to the roadblocks other Indian documentary and independent filmmakers have had to face historically?

Guneet is a powerhouse and brings a lot of experience with her on a project. I really look up to her for her immense contribution to the independent film scene in India. So, her presence definitely makes an impact on the visibility of the film. Kartiki had this beautiful story to share and Guneet and Netflix made sure that it reached the masses and, now, finally to the Oscars.

What are the biggest challenges faced by a documentary cinematographer in India? Do cinematographers have it easier than filmmakers because they can straddle different visual-storytelling formats?

So many people have suggested that I should be shooting feature films and web-series in Mumbai now. They think of documentaries as a stepping stone to shoot fiction films. But things, for sure, are changing now. Especially after documentary films like Writing with Fire and now (Shaunak Sen's) All that Breathes and The Elephant Whisperers, suddenly documentaries have come under the spotlight.

I think the biggest challenge for filmmakers still is to find producers and the budgets to make documentaries in India. Whereas, as a cinematographer, I still have the option to explore different visual mediums.