Oscars 2023 | 'The Elephant Whisperers': Co-cinematographer Anand Bansal on how everyone's honesty made the film singular

Kartiki Gonsalves' Oscar-nominated Netflix documentary short, 'The Elephant Whisperers', has been shot by four cinematographers, one of whom, Anand Bansal, speaks about wielding the camera and his various projects. The 95th Academy Awards' final results will be announced on March 13.

Anand Bansal (right) is one of the four cinematographers on the Oscars-shortlisted Netflix documentary 'The Elephant Whisperers'. (Photos courtesy Anand Bansal)

The camera zooms into a forest, on to its myriad wildlife, in the wilderness stands an elderly Bomman, who calls himself Kattunayakan, the king of the forest, which is his home; where he belongs; where the wild animals roam free; where, for generations, lived his ancestors. The lens goes aerial to show the expanse of the Mudumalai Tiger Reserve in Tamil Nadu, in 2019, and then to the Theppakadu Elephant Camp, one of Asia's oldest elephant camps, established 140 years ago.

The Elephant Whisperers, directed by Kartiki Gonsalves and produced by Guneet Monga's Sikhya Entertainment Production, has been nominated for the 95th Academy Awards, one of the three Indian films to be nominated. Monga, who was the executive producer of Rayka Zehtabchi’s Oscar-winning documentary short Period. End of Sentence (2018), is also the Academy's voting member. The film gently trains the lens on to the human experience and its instance of human-animal coexistence is a much-needed antidote to the human-wildlife conflict narrative. And such films being on OTTs is a much needed breather from just the true-crime documentaries populating the platforms.

The film has its endearing moments, peppered with pure, animal humour, when Raghu chucks out the coconut-jaggery ball mommy Bellie feeds him or Baby Ammu extends just her trunk to receive biscuits, you forget that these species are any different from us, humans.

Independent filmmaker Achal Mishra's Maithili film Gamak Ghar (2019), when it dropped, pushed the limits of filmmaking, of viewing cinema as an art form, of static photographic visuals setting a story in motion. The young Mumbai-based cinematographer, Bansal, 26, who is currently shooting his third film with Mishra, that will star Tanmay Dhanania (Brahman Naman, Cat Sticks, Nishiddho/Forbidden, The Rapist), speaks about shooting for Gonsalves’ film, his visual language and the medium he enjoys working on the most. Edited excerpts:

What is your story?

Who are the cinematographers you look up to?

There are a couple of cinematographers but also many filmmakers because, for me, it is difficult to see cinematography independent of the film. There is Christopher Doyle (Wong Kar-wai films including Chungking Express, 1994; Gus Van Sant's remake of Psycho, 1998, among others), Vittorio Storaro (Apocalypse Now, 1979; The Last Emperor, 1987) and, more recently, I’ve been inspired by the works of Mark-Lee Ping-bing (The Assassin, 2015; co-cinematographer on In the Mood for Love, 2000). There are filmmakers such as Edward Yang, Abbas Kiarostami, Michael Haneke, Hou Hsiao-hsien whose films have inspired me.

How did The Elephant Whisperers come to you?

I was recommended on the project by Krish Makhija who is also one of the cinematographers on the film. Bansal with Bomman during the shoot of 'The Elephant Whisperers'. (Courtesy Anand Bansal)

Which camera did you shoot on and what brief did director Kartiki Gonsalves give you before the shoot?

We shot on Sony FX9. Kartiki and I spoke at length on what this film means to her and how personal it is for her. One day, prior to my first day of shoot, she took me to see Ammu (baby elephant). We carried our camera along and she told me to just shoot without actually giving a brief. It was two-three hours of spending time with Ammu and trying to understand the kind of distance I have to keep from her and, at the same time, try to be friends with her. I think, for shooting this film, the most important part for me was to be comfortable being so close to the elephants but also making them feel comfortable of my presence, which I think was very challenging at first but, over time, we became friends. 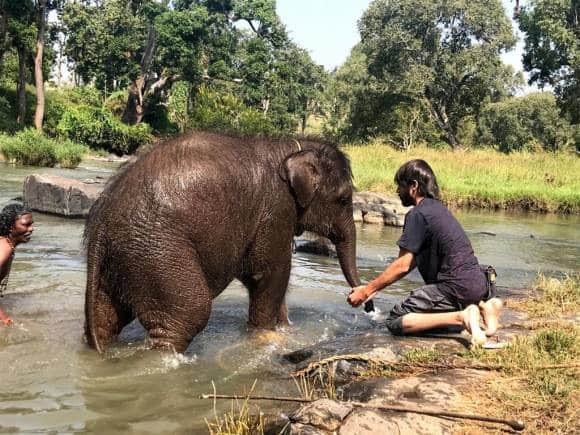 Tell us about shooting the night scenes, the kind of equipment and security required.

In terms of equipment, we had very basic lights — mainly LEDs, which ran on battery. Since we had special permissions, there was no additional security required. The night scenes were shot inside the camp area of the elephants which is comparatively safe and there are always rangers in the forest.

The camera goes real close in some scenes to the creatures, how did you all achieve empathy with an objective tool of surveillance that is the camera?

The answer is in your question itself that camera is a tool, so, I think that empathy comes from the person behind the camera and how they feel when they are filming.

That dream-like scene, where Bomman is riding on Raghu through the jungle at dawn, was that you behind the lens there?

(Laughs) Haha, no. It was shot by Krish or Karan, I think.

There’s one scene where the rising sun is foregrounded by dried-up tree trunks, and a ripple of their reflection on the ground, like an Impressionist painting, the scene next transitions to a forest fire. What was the idea behind the scene?

It is a timelapse which was shot by someone else who specialises in shooting motion-control timelapses. We wanted to capture timelapses of various seasons and in different time of the day, because I feel the shots aid to make the viewer feel the change nature goes through.

Two Oscar-nominated documentaries from India, Shaunak Sen’s feature-length All That Breathes and Kartiki Gonsalves’ short, both have multiple cinematographers. ATB has three and TEW has four. With different styles coming together, how does a film achieve a singular visual language?

I think a singular visual language comes from the director’s command and understanding of the medium. Having said that, every cinematographer brings their own individual sensibilities to the film but are always in accordance with how the director sees the film. Kartiki gave every cinematographer the space to bring something of their own and that honesty with which everyone approached the film also makes it singular.

Is it easier to have multiple cinematographers on a non-fiction film than in narrative fiction?

It’s a standard practice to have multiple cinematographers in fiction as well as non-fiction. 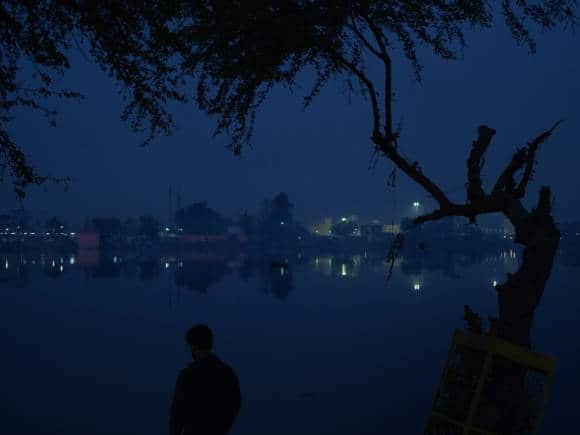 Three films with Achal, is yours the making of another team such as, say, Guru Dutt-VK Murthy, Steven Spielberg-Janusz Kamiński, David Lean-Freddie Young?

I think the journey for us is to be more ourselves.

I think it’s always a delight to work with directors who have an understanding of the camera and visual language in general. When the conversations and process is driven through images, I feel the communication is a lot smoother.

Were there any points of creative disagreements among the various cinematographers, would Kartiki’s word be the last word in such matters?

The film was shot over a period of four or five years, I think, and it started as a passion project for Kartiki which she was self-funding before Netflix got on board. There weren’t any disagreements because every cinematographer shot different schedules and, like I said, we were all working honestly towards the same film that Kartiki was envisioning. You also shot the web-series Gullak? How did that show come to you?

I shot the second season of Gullak (on SonyLIV) and Shreyansh (Pandey), who is the producer on the show, contacted me for the project after seeing Gamak Ghar. 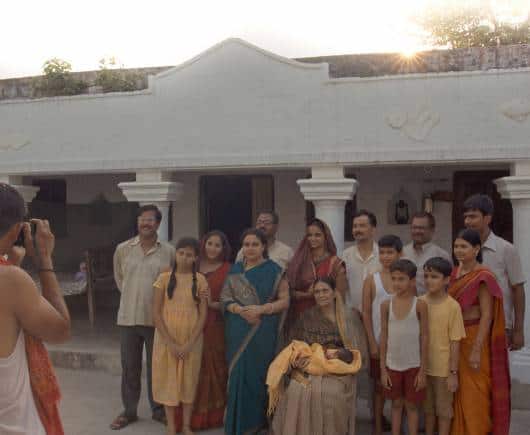 Gamak Ghar has a lot of static shots, each period in the film is shot in a different aspect ratio. The cinematography is a lot like the life-like, contemplative, slow cinema of Hou Hsiao-hsien, Hirokazu Kore-eda and Yasujiro Ozu, especially Ozu’s tatami shots.

We both love the filmmakers you have mentioned and, I think, with Achal and I, the process has always been very organic and also based on what we feel is truthful for us. Shooting the film entirely static and the changes in aspect ratio were decisions which were all taken together and, I think, we always kept each other in check if we were tempted to break away from the language of the film.

Short film, feature film or OTT series — which one do you enjoy shooting the most?

I much prefer shooting long formats because filmmaking for me is not just about going on a set and making images but the experience and effort of trying to form a synergy that is singular despite having so many people involved in the process of making it.