The coronavirus pandemic has exposed the faultlines in the country's higher education hampered by a frightening gap between the haves and have-nots.

On a warm November afternoon in 2020, Shareena Banu picked up a call from a colleague who wanted to know if any of her students needed a free laptop. Banu, an assistant professor at the sociology department of Jamia Millia Islamia, New Delhi had several options among her undergraduate students, many of whom come from low income families across the country.

"I suggested the name of one of my undergraduate students, who received an old laptop from an NGO the next day," says Banu, who obtained her doctorate in sociology from Jawaharlal Nehru University over a decade ago. "He was the lucky one. There were many more in my class who would have wanted to get their first computer," she adds.

Bhanu Pratap Kumar, a second-year BA (Hon) Sociology student at the Jamia Millia Islamia, is excited at the turn of fortune because of his newly-acquired laptop. "It has helped me attend all classes this semester. It was very difficult to read study material running into 40-50 pages on my mobile phone, " says Kumar, the first in his family to go to college. Kumar's father, a farmer who owns a small piece of land at Dingrahi village in Aurangabad district of Bihar, couldn't afford higher education for his two other children, both of whom dropped out of school after Class X. "I am the first student from my village to attend a good university in Delhi," beams Kumar, an alumnus of Sainik School, Jhumri Telaiya in Jharkhand, who plans to appear for the Combined Defence Services exam after university.

The coronavirus pandemic has exposed the faultlines in the country's higher education hampered by a frightening gap between the haves and have-nots. As campuses around India lie empty without students sequestered in their homes, teachers and university administrators are embracing the harsh reality of only half-full virtual class rooms and one-sided tutorials. 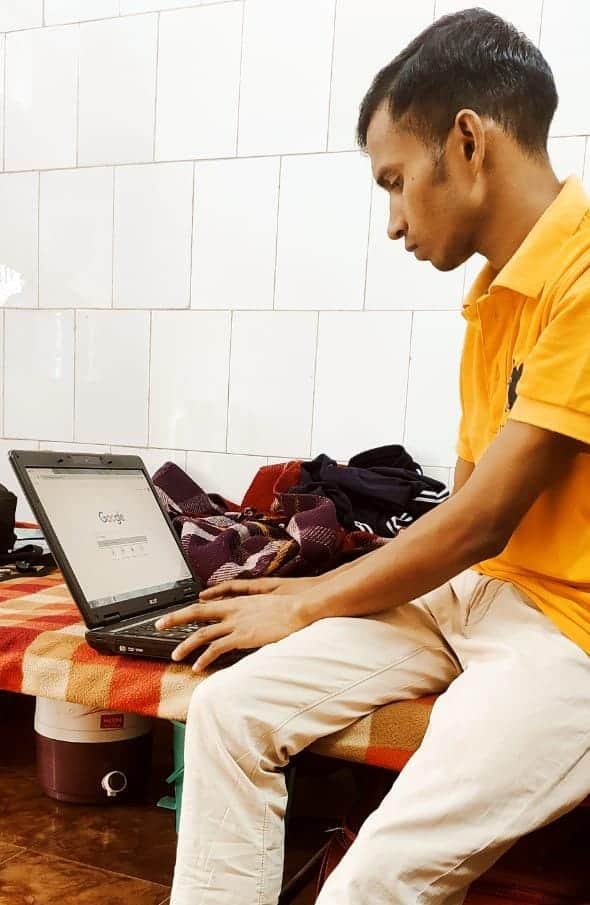 Bhanu Pratap Kumar, a second-year B.A (Hon) Sociology student at Jamia Millia Islamia, New Delhi, is attending online classes with the help of a used laptop donated by an NGO

"There is no complete participation of students in onlines classes. Out of 50, about 30 attend regularly. Those who miss the online classes don't have smartphones or computers to log in. Even some of those who participate go offline because of poor connectivity," says Chandran Komath, assistant professor of political science at the Government College, Kottayam, affiliated to the Mahatma Gandhi University in Kerala. 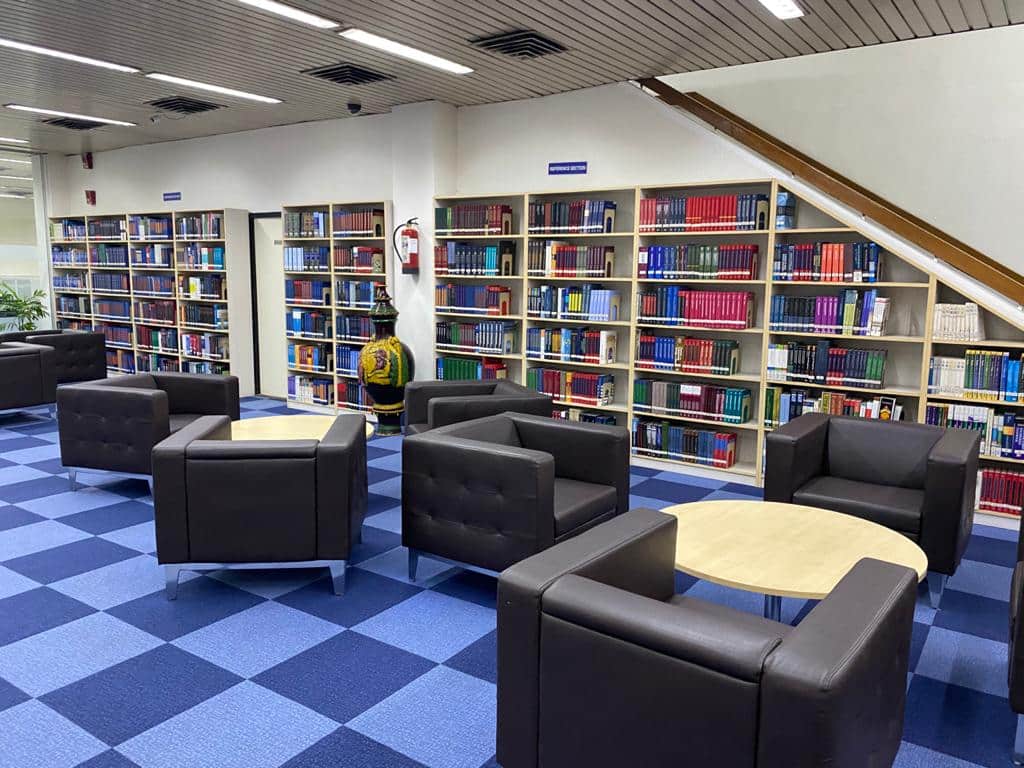 The state-of-the-art library at Management Development Institute, Gurgaon, spends about 90 per cent of its library budget on online resources

All Eyes On Budget

With poor families having school and college-going children being the worst-hit in the pandemic, which has destroyed the livelihoods of millions, the Union Budget 2021 to be presented on February 1, will have the opportunity to address the challenges in the country's higher education system. There are expectations of a centrally-sponsored scheme to provide free laptops and an internet allowance to university students from low income families.

While such a central assistance to students kept out of online classes because of poverty could be the vaccine for an education system plagued by inequalities, the pandemic has also proved the need for upgrading college libraries with modern infrastructure, trained personnel and high-end online resources. The library complex of the Indian Statistical Institute, Bengaluru

The two words often repeated by education experts during the pandemic are -- availability and access. Non-physical learning has meant availability of resources online and, most importantly, making them accessible to all. Both availability of learning material digitally and their access have also brought out the digital divide in higher education, putting a question mark on the quality of degrees to be awarded this year.

"I believe there is a digital divide in terms of getting access to content," says Anand Byrappa, Librarian, Indian Institute of Science (IISC), Bangalore. "For example, IISC and first-generation Indian Institutes of Science (IITs) spend crores of rupees every year to subscribe to journals and databases. However, state universities and colleges struggle to get the quality of content required for their students and faculty. Yes, it may affect the quality of education to a certain extent," adds Byrappa. The library of Government College, Kottayam in Kerala doesn't have a separate building and a computer with internet connection

Government-driven initiatives over the last two decades have been helping college libraries modernise their infrastructure. The Ahmedabad-based Information and Library Network (INFLIBNET) centre, an autonomous inter-university facility by University Grants Commission, coordinates building of e-resources for colleges across the country.

"The INFLIBNET centre has been doing excellent work for over three decades," says Ishwara Bhat, former Pro-vice-chancellor, Presidency University, Bengaluru. "The centre provides key journals, e-books and data base to colleges and universities all over the country giving a good push to use of online resources," adds Bhat.

"INFLIBNET's e-ShodhSindhu consortium makes digital resources available to all central universities, centrally-funded technical universities and state universities," says Jagdish Arora, who headed the INFLIBNET centre between 2007 and 2018. "We negotiate with publishers for the entire education system in the country. While we pay for the eligible institutions, all others can avail the same negotiated rate," adds Arora, an adviser to the National Board of Accreditation.

"A lot of money is required for buying online resources. Many state governments are not in a position to invest that kind of money for government colleges,"
- Ishwara Bhat

"Libraries require huge investments, even the smallest college needs 20-25 lakh rupees per year. The IITs spend 10-12 crore every year for their libraries," he adds. "The pandemic has affected so much change that most libraries will have to quickly upgrade their physical and digital infrastructure in the next one-and-half years. We can't delay it," says Bhat, a former university librarian at BITS, Pilani.

Elite institutions like Indian Institutes of Management, Indian Institutes of Technology and top business schools are prepared to meet the challenges thrown by the pandemic. "We are prepared. About 85-90 per cent of our library budget is spent on online content," says Antony Jose, Librarian, Management Development Institute (MDI), Gurgaon. "Earlier, library users were those who visited the library. Today the user is one who visits virtually," he adds.

MDI, Gurgaon pays about rupees 80 lakh licence fee every year to buy global financial data base from the Bloomberg Finance Lab. "We spend more than one crore rupees as licence fee to the Harvard University every year to get their case studies for teaching in classes," says Jose, a former librarian at IIM, Indore. "A large amount of money is also spent on online journals numbering about 18,000 and e-books," he adds.

It is a different reality in many colleges across the country. At the Government College, Kottayam in Kerala, the library doesn't even have a computer connected to the internet. Generous teachers like the college's political science assistant professor Komath help students, who are unable to attend online classes for lack of smartphones and computers, handing them photocopies of tutorials.

"We have more than 500 universities supported by state or central governments, but fewer than 100 are headed by qualified librarians," says ARD Prasad, professor of library and information sciences at the Indian Statistical Institute, Bengaluru. "Everybody says the library is the most important place in a university, but when there is a budget cut, it is the library that is affected or the librarian who is axed. That is a danger for the society," adds Prasad, who was a member of the high level committee of the National Mission for Libraries set up in 2011.

While availability of online resources varies among institutions, access has been a hurdle for students across the country due to lack of computers and connectivity. "I couldn't join two online classes this week because of poor network connection," says Abhirami Rajendran, a final year B.A Political Science student at the Government College, Kottayam. Rajendran, who will be appearing for the Civil Services Preliminary exam after her undergraduate programme, doesn't own a computer, something her family can't afford.

"Access to information is very important," says Usha Munshi, president, Information and Communication Society of India. "A big step in this direction is the concept of 'One Nation, One Subscription' right now handled by the office of Principal Scientific Adviser to the government, K Vijay Raghavan. It will offer open access to high quality online resources."
Faizal Khan
Tags: #education
first published: Jan 18, 2021 01:55 pm