The three historic wins gave the saffron party one of the reasons to celebrate the results, apart from the fact that it emerged as the single-largest party bagging 75 seats, 72 of them in Jammu division.

At 21, Minha Lateef is not just among the youngest winners of the maiden District Development Council (DDC) polls in Jammu and Kashmir. But the law student is also one of three candidates who have given the Bharatiya Janata Party (BJP) its first-ever electoral success in Kashmir, the province in the erstwhile state otherwise dominated by regional heavyweights. 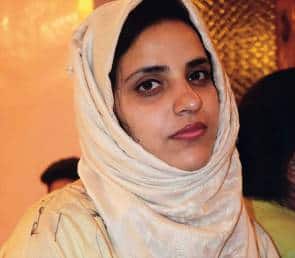 Minha, who is in seventh semester of her law degree at Kashmir university, won from Kakapora II seat of Pulwama, a militancy-hit district towards the South of the Valley

“It is the mandate for development in my constituency,” Minha told Moneycontrol not willing to divulge more details.

The other two BJP winners from Kashmir are Aijaz Hussain Rather, a trained Engineer who won from Khanmoh II in Srinagar and Aajaz Ahmad Khan, who has a master's degree in English and Political Science and won Tulail segment in Bandipur district.

The three historic wins gave the saffron party one of the reasons to celebrate the results, apart from the fact that it emerged as the single-largest party bagging 75 seats, 72 of them in Jammu division.

Minha comes from a political family. Her father Lateef Bhat, a former Congressman since 2004 switched to the BJP in 2017. He is  vice president of the party’s J&K wing of Minority Morcha.

“The seat is reserved for a woman. We wanted her to fight,” Lateef said.

Minha secured 364 votes, 16 more than her rival Ruqaya Bano from the Peoples Democratic Party (PDP), one of the regional parties in the People’s Alliance for Gupkar Declaration (PAGD).

In all, the alliance won 110 of the 280 territorial segments in the polls, first electoral exercise since the abrogation of Article 370 and bifurcation of the erstwhile state into two union territories- J&K and Ladakh.

In the DDC elections, @BJP4JnK got more votes than combined votes of National Conference, PDP and Congress.
J&K is steadily moving towards development policies of PM @narendramodi Ji and away from dynastic politics. pic.twitter.com/e0dla8kXqS

Unlike Minha, her party colleague and winner Aijaz Hussain Rather is the first-generation politician from his family in Srinagar’s Khanmoh. Rather, who studied engineering in Chennai after his high school at Madeenat- Ul-Uloom madrasa (now MU College), has been with the the BJP since 2006.

“Friends in Chennai introduced me to the BJP. When I came back to Kashmir 14 years ago, there was not even a proper BJP office,” said the 35-year old who polled 823 votes against 381 votes won by JKAP’s Ghulam Hassan Hajam. The PAGD leader’s candidature was rejected in the constituency on technical grounds. Aijaz Hussain Rather, 35, who won from Khamoh II in Srinagar

As national vice president of BJP’s youth wing, Rather’s prominence transcends J&K boundaries. Popular as Engineer Aijaz, he has worked in West Bengal and Chandigarh too.

“Since childhood, I have witnessed the phobia against Jana Sangh (now BJP). BJP was treated as if it was a religious party and not a political party. Today, we can say we have dispelled that myth,” he said.

Top BJP leaders including Union Home Minister Amit Shah hailed people of Jammu and Kashmir for voting for the BJP. BJP leader Shahnawaz Hussain, who camped in Kashmir for more than a month, called the results “historic” that has helped remove the Hindu party tag of the BJP.

I heartily thank our sisters and brothers of J&K for voting BJP as the single largest party in the District Development Council elections. BJP under the leadership of PM @narendramodi ji will continue to work relentlessly towards the prosperity and development of the J&K region.

Khan, 35 was elected sarpanch seat from his village in 2018 local body elections and was also elected as Block Development Council chairperson by panchs and sarpanchs last year. He was associated with PDP until a few months ago, when he, and his ex-MLA father Fakeer Khan, joined the BJP. “My rivals used to label BJP as an anti-Muslim party during the campaign. Getting elected to the council in a Muslim-dominated seat is a step towards exposing that narrative,” said Khan, whose father is the in-charge of BJP’s J&K chapter of Scheduled Tribe wing.

READ: Explained | All you need to know about the first-ever DDC polls in Jammu and Kashmir