Upcoming Webinar:Join us for 'The Future Techshot' on Sept 22, 10:30am to gain insights into role of tech in streamlining businesses. Register Now!
you are here: HomeNewsPolitics

Explained: The political significance of Raja Mahendra Pratap Singh, after whom a university has been named in UP

Raja Mahendra Pratap Singh was a royal who became a freedom fighter and social reformer. He is revered by the Jats of Western Uttar Pradesh, many of whom are farmers upset with the ruling BJP government over the farm laws

The university, which is being set up with a budget of Rs 101 crore, will be spread over 92 acres in Lodha and Musepur Kareem Jarouli villages of Aligarh’s Kol tehsil, and will provide affiliation to 395 colleges of the Aligarh division.

“The occasion of Radha Ashtami today makes it more holy. I am missing former CM Kalyan Singh’s presence today. He would’ve been very happy with the development of Raja Mahendra Pratap Singh University,” PM Modi told a large gathering as he launched the university, according to a report in News18

READ: Uttar Pradesh Election, 2022: From Modi to Owaisi, 8 key faces in the contest

But just who is Raja Mahendra Pratap Singh and why is the event politically significant? MoneyControl explains.

Born in a royal family on December 1, 1886 in Hathras, Raja Mahendra Pratap Singh was a freedom fighter, social reformer and a figure representing the Jat community,  predominant in Western Uttar Pradesh.

Although he never became a Marxist, he remained a Left sympathiser who wanted a pluralist, secular India, historian S Irfan Habib told MoneyControl.

"He was a proclaimed socialist and had met Lenin as well," he said.

Son of Raja Ghanshiam Singh, the Jat king of Mursan in Aligarh, Mahendra Pratap was adopted by Raja Harnarain of Hathras at the age of three. He went on to live in Vrindavan and Mathura though he spent most of his time, about 32 years, travelling outside India.

Also, read: Like PM Modi, UP CM Adityanath hasn't taken a day off in over 4 years: Deputy CM Dinesh Sharma

In 1914, during World War I, Mahendra Pratap left India and led the German-backed first Provisional Government of India in Kabul, Afghanistan and declared himself its President while waging a war against colonial rule. It was around this time (1917) that Mahendra Pratap was received by Lenin and Leon Trotsky in Petrograd, in Russia . The British announced a bounty on his head and he fled to Japan to continue his movement. 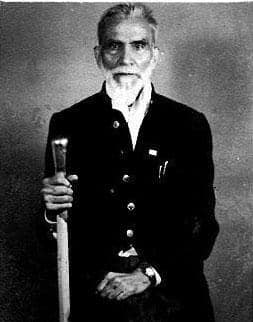 He also established Prem Maha Vidyalaya, a polytechnic college, in Vrindavan, which offered various courses, including carpentry, pottery and textiles under one roof. In 1932, Mahendra Pratap was nominated for the Nobel Peace Prize.

Habib, who met Raja Mahendra Pratap in 1977, two years before his death, said though he was associated with the All India Jat Mahasabha, but Mahendra Pratap never spoke of his Jat identity.

He started participating in politics at a young age. In 1911-12, he went off to fight in the looming Balkan War in Turkey, on the side of the Ottoman empire, along with fellow students from the Mohammedan Anglo Oriental College (MAO) college.

"He was always an independent man. Never associated himself with any party," Habib said.

Mahendra Pratap had joined MAO College in 1895, according to records. But he could not complete his graduation and left in 1905. MAO became AMU in 1920 and regards Mahendra Pratap as its alumnus. In 1977, AMU, under the-then vice-chancellor AM Khusro, felicitated Mahendra Pratap at the institution’s centenary celebrations.

According to the university’s records, in 1929, Raja Mahendra Pratap leased 3.04 acres of land at Rs 2 per annum to AMU. Today, that piece of land is used as a playground by the City High School of AMU. The MAO was set up on 74 acres of cantonment land procured from the British government, which was in the process of closing down the Aligarh Cantonment.

The Prime Minister’s presence at the foundation stone laying ceremony of the university named after the Jat icon is being seen politically as the ruling BJP’s bid to win over the community ahead of the crucial assembly polls in Uttar Pradesh next year.

A section of Jats is said to be aggrieved with the BJP over the issues of farmers and farm laws. On September 5, farm leaders behind the movement against the Centre’s new agricultural laws organised a Mahapanchayat in Muzaffarnagar in western UP, which was attended by tens of thousands of farmers.

This is not the first time that the BJP has tried to appropriate the Jat icon of western Uttar Pradesh. In 2014, months after the BJP came to power at the Centre, the party’s Uttar Pradesh unit said that since Mahendra Pratap Singh had ‘donated’ the land to set up AMU, the university ought to celebrate his birthday as it did that of founder Sir Syed Ahmed Khan.