What Jerome Powell’s second term means for US and India

As long as the Federal Reserve pares its policy in a planned manner, it might not be much of a problem for India. If done suddenly in an ad-hoc manner, it could lead to volatility in the Indian markets

The appointments at the Federal Reserve always attract attention, but this time it was even more interesting. This was mainly because the Chair of Federal Reserve Board, Jerome Powell’s term was ending in early February 2022, the Vice Chair of the Board, Richard Clarida’s term was ending in late January 2022, and, Randal Quarles who is Vice Chair for Supervision resigned from the Board. Given these changes the seven-member Board has been reduced to four, as one position was already vacant. The position which matters the most is that of the Chair of the Board, and the question whether Powell will be reappointed attracted a fair bit of discussion.

Ending months of speculation, on November 22 US President Joe Biden nominated Powell for another 4-year term, and promoted Board member Lael Brainard as the Vice Chair. In his statement, Biden praised the leadership of Powell and Brainard to help steer the US economy “through the worst downturn in modern American history and put us on the path to recovery”.

The next question is what to expect from Powell’s second term? This can be best understood by looking at his tenure in the backdrop of developments in US economy via a timeline of events.

In 2018, Powell was appointed amidst similar curiosity. After cutting policy rates to near-zero levels during the 2008 crisis, the Fed had started increasing policy rates from 2015 onwards. Powell was a member of the Board in that period under the chair of Janet Yellen. Under her tenure, Yellen raised policy rates five times to take the Federal Funds Rate (FFR) to 1.25-1.50 percent levels. Powell continued with Yellen’s normalisation policy, and raised the FFR four times to 2.25-2.50 percent levels by end of 2018.

In 2019, the US economy lost steam putting both the Fed and Powell under pressure. In a turn around, the Fed lowered policy rates by 75 bps in 2019 to touch 1.50-1.75 percent levels. This was also a period where Powell was targeted by then US President Donald Trump. The US presidential elections were coming up in 2020, and Trump was losing popularity amidst a slowing economy. Trump blamed the Fed and Powell for not easing the monetary policy quickly enough to revive the economy and resurrect his chances for a re-election.

In 2020, COVID-19 struck, leading to sudden collapse of economies around the world. The Fed, like most other advanced country central banks, not just cut policy rates to zero levels, but also ushered large-scale asset purchases to lower the burden on the economy.

In 2021, economies started to recover as the spread of the pandemic abated with rise of vaccinations. The dramatic turnaround in economic fortunes brought new set of challenges for the Fed and Powell.

The silent inflation suddenly sprang to life averaging 5 percent in the April-September period before touching 6 percent in October, the level last seen in 1990. The Fed also based its policy on unemployment rates which rose to double digits during the pandemic, but has gradually declined to 4.6 percent in October. 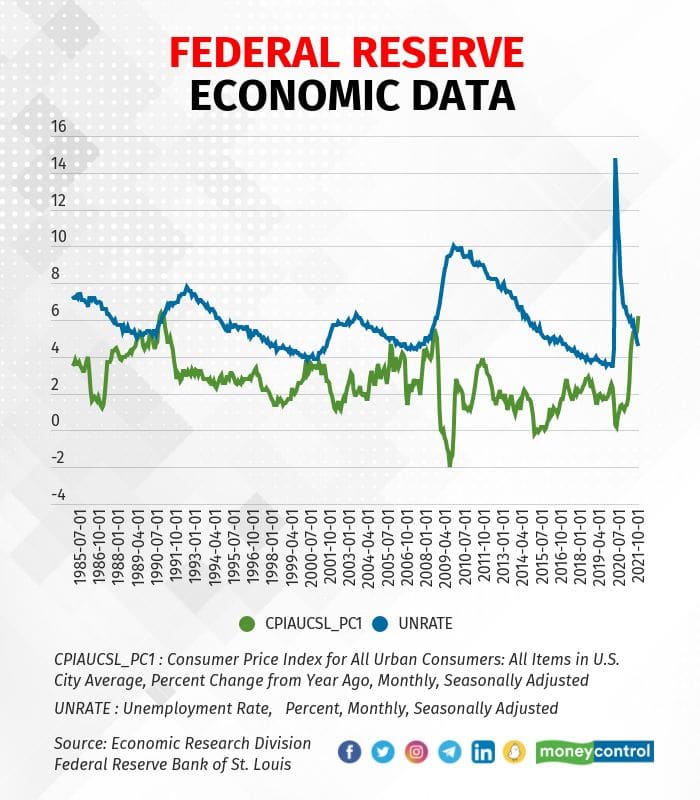 With a surge in inflation, Powell was confronted with a peculiar problem. Since the 2008 crisis, the Fed and subsequent Chairs including Powell were criticised for letting inflation remain below 2 percent. Now, they were being criticised for allowing inflation to touch record high levels.

Since July, Powell (and other Fed officials) have spoken on this rising inflation, and termed it as transitory. They say that inflation had declined during pandemic averaging 1 percent in the period of March 2020 to February 2021. As there is resumption in economic activity, and there is large statistical effect, inflation is bound to rise.

Of late, the speeches have mentioned that supply bottlenecks and labour shortages have led to rising prices, and wages respectively, which has fed into inflation. Despite these developments, Powell and this team expect these pandemic effects to wean off by 2022, and inflation to touch the 2 percent levels by 2022. Hence, they are not rushing to increase policy rates as yet.

Clearly, Powell has his hands full in the second-term. In the first term, economists often compared economic conditions to that of Great Depression, and asked the Fed to continue with its easy policy. In the recent surge, economists are comparing the current economic conditions to that of Great Inflation of the 1970s, and asking for tighter policy. It is almost like getting a Formula One race car to suddenly switch tracks to a city road filled with potholes and bumper-to-bumper traffic. Both require different set of skills, and the question is whether Powell and the Fed can control the car.

What about the impact on emerging markets, particularly India? As mentioned above, the Fed policy impacts the world economy, and more typically those economies which rely extensively on foreign capital flows. India belongs to the latter club, and has seen excessive capital flows of late. RBI Governor Shaktikanta Das in a recent interaction mentioned that the central bank was surprised by the high capital inflows which continues to keep markets highly liquid. The inflows have also led to heightened buoyancy in the equity markets whose valuations look ‘overstretched’ as per the RBI’s latest outlook.

At some point the Fed will have to withdraw its super easy monetary policy which will lead to reversal of liquidity and stock market gains in the Indian economy. As long as the Fed pares its policy in a planned manner, it might not be much of a problem for India. If done suddenly in an ad-hoc manner, it could lead to volatility in the Indian markets.