Political pundits count the 22 parts, 395 articles and 8 schedules of the original Constitution. But what catches the eye is its aesthetics. Beautiful borders on each parchment paper and words slanting artistically.

Within a vault-like room in the Library of the Parliament of India in New Delhi sit helium-filled cases - 30x21x9 inches. The temperature is fixed at 20°C (+/- 2°C) and a 30% (+/- 5%) relative humidity is maintained throughout the year. Within the nitrogen-laden case lies a 251-page bound manuscript. Its weight: 3.75 kilograms. Its title: Constitution of India. The original manuscript of the Constitution of India that came into force on January 26, 1950. Exactly 71 years ago.

Political pundits count the 22 parts, 395 articles and 8 schedules of the original Constitution. But what catches the eye is its aesthetics. Beautiful borders on each parchment paper and words slanting artistically. The curl at the crown of the Bs and Rs, the neat loop at the beginning of U, perfectly coiled quotation marks and the perfect parentheses. Not one word misplaced, not one blotch of ink anywhere. The italics and the numbers so immaculately penned that it is difficult to surmise that it was written by man. A man named Prem Behari Narain Raizada (Saxena). It all began on August 29, 1947, when the Constituent Assembly set up a Drafting Committee to formulate a Draft Constitution of India. After 11 sessions and endless debates and amendments, the Constitution for the newly-independent nation was ready. Someone with an alphabetical flourish had to write it. Prime Minster Jawaharlal Nehru wanted it handwritten in a flowing italic style. Prem Behari Narain Raizada (Saxena), a noted calligraphist, was chosen for the task. The bespectacled Raizada held a degree from St Stephen’s College (New Delhi) and worked for Govan Brothers (Raymond Eustace Grant Govan, the founder of Govan Brothers, was the first President of Board of Control for Cricket in India). The Constitution was originally written in Hindi and English.

Perhaps calligraphy ran in Raizada’s veins. His grandfather, Ram Parshad Saxena, was an eminent scholar of Persian and English and a proficient calligraphist. Raizada picked up the basics of calligraphy from his grandfather who raised him after his parents died very young. Before Raizada wrote the first C on the 90-110 gsm 16x12 inch parchment paper, Nehru asked him about the task remuneration.

“Not a single penny. By the grace of God I have all the things, and am quite happy with my life. But I have one reservation - that on every page of Constitution I will write my name and on the last page I will write my name along with my grandfather’s name,” Raizada enumerated his demand. Or, so the story goes. 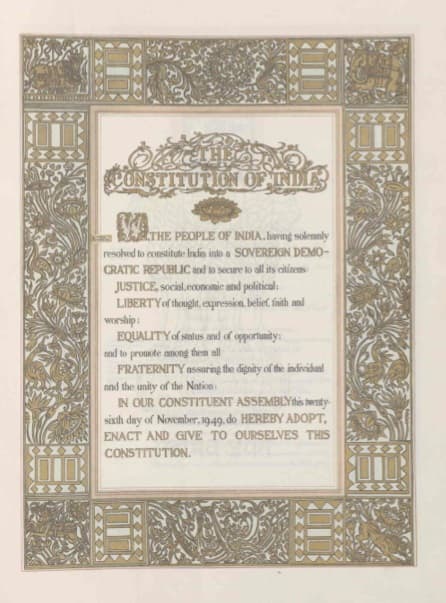 The Preamble page was created by Beohar Rammanohar Sinha.

With the request granted, Raizada took leave from Govan Brothers and hunched over his desk in the Constitution Hall (now Constitution Club) for six months to handwrite 395 articles, 8 schedules, and a preamble in both English and Hindi. He used No.303 pens for English calligraphy and Hindoo dip-pen nib from Birmingham for Hindi calligraphy. In all, 432 pen-holder nibs were used to calligraph 251-pages, the longest handwritten constitution of any country.

While Raizada dotted the i and cut the t, noted artist Nandalal Bose and his students of Visva Bharati (Shantiniketan, West Bengal) took to embellishing the borders of each page of the Constitution. One of the pioneers of modern Indian art and a key figure in Contextual Modernism, Bose not only used narratives from ancient Vedas, Mahabharata, Ramayana, but also depicted modern tales of Mahatma Gandhi and Netaji Subhash Chandra Bose. The section on fundamental rights features a scene from the Ramayana; Gandhi’s Dandi March is depicted in the section on official language; in Part XIX, Bose is seen saluting the flag; Tipu Sultan is painted in Part XVI; King Ashoka can be seen propagating Buddhim in Part VII while torrential ocean waves are sketched in Part XXII, the last section of the Constitution that mentions the commencement and repeals.

Incidentally, Nandalal Bose also sketched the emblems for the Government of India’s awards, including the Bharat Ratna and the Padma Shri. The pages were artistically decorated by Nandalal Bose and his students.

The Preamble page was created by Beohar Rammanohar Sinha, a Jabalpur-native who studied art in Shantiniketan and Chungking (China). Before creating art for the Preamble page, Sinha made exploratory trips to Ajanta & Ellora Caves, Sanchi, Sarnath and Mahabalipuram and finally used traditional motifs uch as Padm, Nandi, Airavata, Vyaghra, Ashwa, Hans and Mayur to pictorially convey the essence of Indian Constitution. Dr Rajendra Prasad was the first person to sign the Constitution of India. The last page of the Constitution bears the name of Prem Behari Narain Raizada (Saxena).

Facts about the Constitution of India