The report acknowledges that policy intervention in the form of the National Clean Air Programme would reduce particulate pollution by 20 percent to 30 percent by 2024, saying if India were to achieve and sustain the reduction, it would lead to remarkable health improvements

Notably, the rest of the country is not free of the menace either. Also read : How India’s routine immunisation bounced back from disruptions of COVID pandemic

“All of India’s 1.3 billion people live in areas where the annual average particulate pollution level exceeds the WHO (World Health Organisation) guideline. More than 63 percent of the population live in areas that exceed the country’s own national air quality standard,” the report said.

The report described India as the world’s second most polluted country, next only to Bangladesh. It presents a global picture of the impact of particulate pollution (PM2.5) on human lives in 2020, as the COVID-19 pandemic first emerged.

“It's critical that citizens demand clean air. And AQLI as a tool empowers citizens and policymakers to create an evidence-backed conversation around the impacts of air pollution on human health. So no matter which part of India you live in, this tool tells you precisely how air pollution is reducing your life spans,” said Ashirbad Raha, Communications Director, EPIC India, explaining the usefulness of AQLI.

Noting that India has the most polluted air in some of its regions, the report says nearly 510 million people, about 40 percent of the Indian population living in the Indo-Gangetic plains (Bihar, Chandigarh, Delhi, Haryana, Punjab, Uttar Pradesh, and West Bengal), are on the track to lose 7.6 years of life expectancy on an average if the current pollution levels persist. 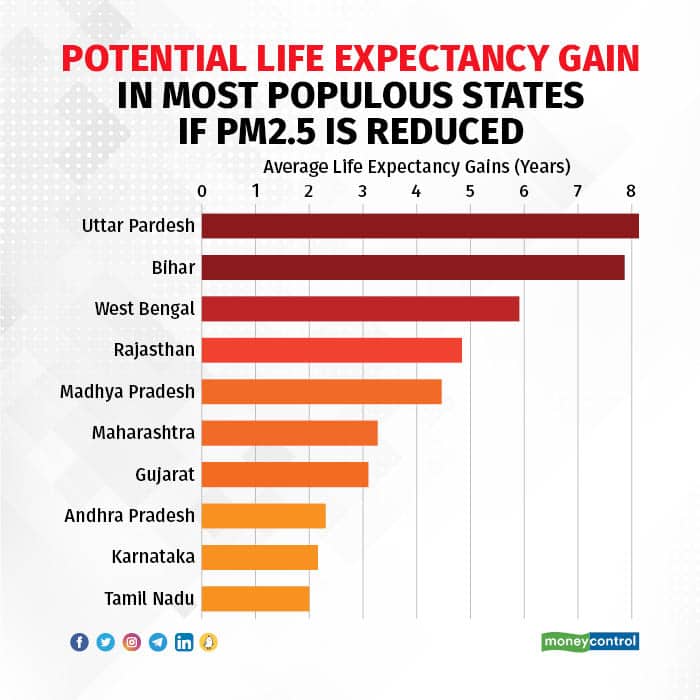 “The residents of Lucknow stand to lose 9.5 years of life expectancy if pollution levels persist,” it added.

The AQLI report said air pollution is no longer just limited to Indo-Gangetic plains as high levels of air pollution have expanded geographically over the last two decades.

In Maharashtra and Madhya Pradesh, home to 200 million people, pollution has risen by 68.4 percent and 77.2 percent, respectively, since early 2000.

“Here, the average person is now losing an additional 1.5 to 2.2 years of life expectancy, relative to the life expectancy implications of pollution levels in 2000,” the report added.

The report acknowledged policy intervention by the Union government in the form of the National Clean Air Programme (NCAP) to reduce particulate pollution by 20 percent to 30 percent, by 2024.

“If India were to achieve and sustain this reduction, it would lead to remarkable health improvements… According to the AQLI, a permanent, nationwide reduction of 25 percent, the midpoint of NCAP’s target range, would increase India’s average national life expectancy by 1.4 years, and by 2.6 years for residents of the National Capital Territory of Delhi,” it added.

The report blamed India for contributing about 44 percent of the world’s increase in pollution.