Why Germany is saying Willkommen to Indian IT companies

While the European country is the fourth-largest economy, its leading enterprises have not outsourced heavily. With the onset of COVID-19, when German companies had to cut costs, they turned to Indian IT firms for help. For Indian firms, Germany has an outsourcing potential of about $40-50 billion.

People walk with a dog on the Pariser Platz in front of the Brandenburg Gate during snowfall in central Berlin, Germany, Sunday, Feb. 7, 2021. A snowstorm and strong winds pounded parts of Germany on Sunday. (AP Photo/Markus Schreiber)

Willkommen, in German, means ‘Welcome’. For big Indian IT firms like TCS, Infosys and Wipro, it has been raining large deals from Germany over the last few months. While the increased demand for digital is driving growth, the need for locals and German labour laws could present challenges, say experts.

Since the onset of COVID-19, Indian IT firms have won major deals in the region. According to Mrinal Rai, Principal Analyst, ISG, an IT advisory firm, deals worth about $14.7 billion were signed in the last six months, with annualised contracts value (ACV) of about $3 billion.

Significant contracts include Infosys’ Daimler contract, Wipro’s $700 million contract with Metro AG, where it took over the latter’s IT unit, and TCS’ taking over of the IT arm of Deutsche Bank.. 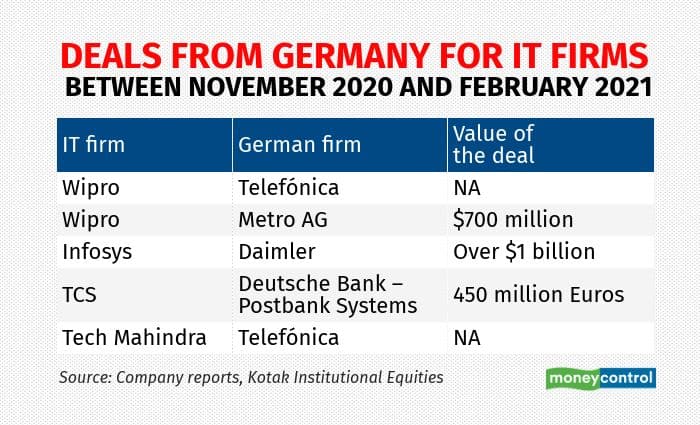 What is driving demand?

The trend of IT firms taking over clients’ IT units and captive centres is hardly new, especially during a crisis. For instance, TCS took over CitiGroup’s captive BPO, now renamed eServe, during the global financial crisis. Wipro bought Citi Technology Services Ltd, the technology arm of Citigroup, in the same period. Cognizant acquired the captive centre of Swiss firm UBS in October 2009.

At the back of COVID-19, a similar trend followed, with Germany being the focus.

Phil Fersht, CEO, HFS Research, an analyst firm, said that while Germany is the fourth-largest economy, its leading enterprises have not outsourced heavily until the pandemic. This rising interest in outsourcing is driven mainly by three factors.

TCS' acquisition of Postbank Systems and Wipro’s Metro AG deal, where they took over the client’s technology unit, are examples.

Digital transformation: Peter Bendor-Samuel, CEO, Everest Group, explained that before COVID-19, the German market had been slower to transform than the US. “Now it is quickly trying to catch up,” he pointed out.

“The German financial services market was distressed, pre-COVID-19, and took a further hit during the pandemic. This has sent the sector into a restructuring frenzy, in which they are looking to modernise their legacy IT while rapidly adopting digital transformation,” he said.

Other sectors that are fast adopting technology include automotive majors.

Investments by IT firms: The investments IT firms have already made in the region over the last few years are helping, said Ray Wang, founder and principal analyst, Constellation Research.

Over the last few years, IT firms have strengthened their sales, onshore capabilities and presence in the region.  According to Wang, along with earlier investments, Indian outsourcers are also aggressive in pursuing the deals and are showing a lot more flexibility in joint venture partnerships.

What is in it for IT firms?

Currently, Germany is not a big market for Indian IT firms, but the potential is huge.

Joshi of Everest pointed out that for the Indian IT sector, Germany is a $500- million market, but it has an outsourcing potential of about $40-50 billion. “Given the large deals signed by TCS, Infosys, and Wipro, this number will quickly change,” he added.

In addition, with Brexit, Germany could provide a strong foothold for Indian IT firms in Europe. Currently, in the European region, the UK is the largest market though IT firms do not share revenues for the region separately. Recent comments from top IT companies have made it clear that Europe is one of the key focus areas for Indian IT majors.

Explaining Wipro’s organisational overhaul in November 2020, Thierry Delaporte, CEO, said Europe is one of the key focus areas for the firm as they look to reduce the risk from US geographies. The company has appointed Michael Seiger as the Country Head and Managing Director for Germany and Austria.

Alluding to the Daimler deal, Parekh said during the earnings call in January, “This includes the largest deal we signed in our history and what we believe is the largest in the IT services industry in India. This will continue to expand our strong presence in the Continental European markets.”

But there are challenges.

They include the need for strong local presence, and local labour laws that might prove expensive.

Bendor-Samuel explained that lack of German leadership and local employees are hurdles. “The German market is clearly opening up to multinational service providers but it clearly still favours a strong dose of German representation. Indian firms are working to address this but still have some way to go,” he added.

This is where taking over IT units of German companies, along with their employees, help to some extent.

Rai further explained that while Indian IT firms are making headway in capturing the German industries through offerings in the areas of Artificial Intelligence (AI), Machine Language (ML) and intelligent business automation, they face stiff competition from local AI startups and global firms.

Parekh and Rajesh Gopinathan, CEO, TCS, during an earnings call last month, had mentioned the increased competition for projects in the European region from peers. “This is an extremely competitive situation with several European, US and Indian companies competing for this work,” Parekh had said.

Another key challenge is the German labour laws, which are punitive. German laws make rebadging (moving employees from the original employer to the outsourcing firm) and employee layoffs expensive. So large restructuring might reduce the Indian firms’ competitive advantage, Bendor-Samuel added.

Some of the German deals TCS and Infosys signed will also dilute margins, said an analyst at a domestic brokerage firm, who did not want to be named.

“The challenges in the region will exacerbate if there is a renewed economic downturn and these providers will need to offload these German staff,” points out Fersht of HFS Research.

However, the advantages might outweigh the risks. These deals are more attractive than acquiring competitive firms that are still overpriced and struggle to bring any differentiators to the table, Fersht explained.

“It is an opportunity to grow in the market and companies need headcount in the German market. IT companies can smartly redeploy these employees in other projects,” the analyst added.