Where have all IndiGo’s ‘CEOs’ gone?

In January 2016, IndiGo held its first post-listing earnings call. That time, the airline had a fleet of 111 aircraft. Analysts were eager to know when the A320neo would be inducted and the alternative plan for fleet augmentation due to the delay.

The airline had converted its 30 A320ceo to neo and was looking at a lease from the open market to fill in the shortfall due to the delay in the delivery of the A320neo. This saw the airline look at TigerAir for additional aircraft and just about any available A320ceo in the market.

By this time, the VT-INA, the first aircraft of the airline, had been long re-delivered in line with its philosophy of operating an aircraft on a six-year lease to avoid expensive engine shop visits and maintenance checks. This also helped to keep the fleet young.

But the airline had to deviate, primarily due to the delays from aircraft maker Airbus and engine company Pratt & Whitney. IndiGo had an active fleet of 130 A320ceo at the end of March 2017—its highest-ever active count of the A320ceo. Overall, the airline operated 158 A320ceo in its fleet.

Where have all the ‘CEOs’ gone?

Now, the airline has only 59 of them active. This is a mere 38 per cent of the total ‘ceo’ aircraft it operated. Another 21 per cent, or 34, are either stored or are in process of re-delivery at various airports across the world. These airports (Jakarta, Istanbul, Ammam) have large MROs known for re-delivery checks, et al.

Twenty two of the 158 aircraft are with the lessor and may either be scrapped or wait for an opportunity to be placed with another operator, while 43 are already flying for other airlines.

This includes Scoot, the rebranded TigerAir, from which the airline had initially inducted the older aircraft.

The airline then took 58 from the open market, and not directly from the manufacturer, unlike the first lot of 100. With a razor-sharp focus on reducing cost and keeping the fleet ready for the future, the airline has been phasing out or storing the A320ceo rapidly to ensure that it operates more of the neo family aircraft.

IndiGo is known for its young fleet and pre-COVID-19, it was clocking a delivery a week. The airline also operates an aircraft which is a March 2003 vintage. VT-IKC started service as A7-ADE with Qatar Airways. It was subsequently returned to the lessor in September 2018 and has been with IndiGo since March 2019. The aircraft is 18.4 years old.

Strange as it may seem, a lot of aircraft which IndiGo leased from the used- aircraft market had seen service in India before. VT-IHQ started its life as VT-KFK with Kingfisher Airlines. 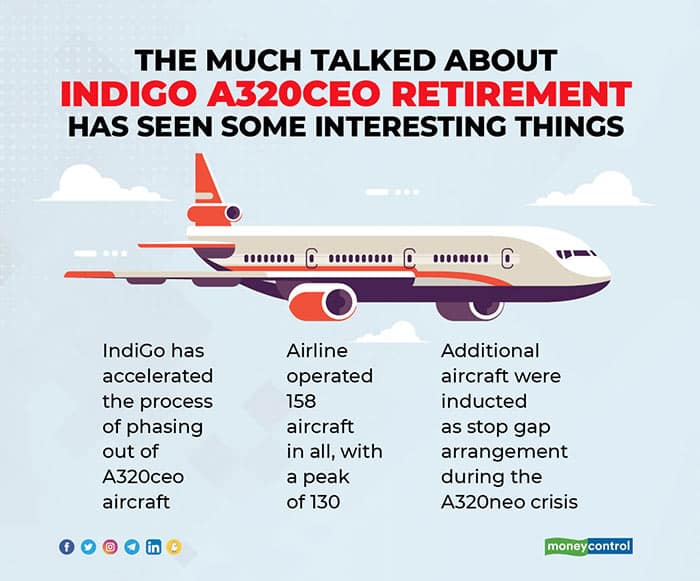 Likewise, VT-IHS served Kingfisher Airlines as VT-KFB. VT-IKB was inducted by Air Deccan and operated as VT-ADT. Likewise, VT-IHD had served with Air Deccan as VT-ADS. The most interesting bit is of VT-INN, which operated from November 2007 to December 2008 with IndiGo and returned as VT-IHG.

While these are aircraft which have seen service with airlines that don’t operate anymore, there have been cases of aircraft rotating among existing airlines.

While IndiGo got the aircraft repainted in its livery when inducting it, which earlier operated for GoAir, AirAsia India got a hybrid livery which is not in sync with its own standard tail or fuselage colours.

One aircraft was also converted to cargo and thus becoming the first A320 to be converted from passenger to freighter.

Scoot took back 11 out of its 12 aircraft and SAS 9, which earlier operated with IndiGo. The aircraft went far and wide -- from Mexico to Vietnam and Scandinavia to Brazil -- with a few being taken up by Super Air, an Indonesian startup from the Lion Air group.

IndiGo, though, has little control over who takes up the aircraft after it is done with the lease period, since it is the prerogative of the lessor and not the airline.

IndiGo is one of the largest customers of Airbus and now CFMs. With large orders, a healthy cash balance and a market share to envy in one of the fastest-growing markets in the world, lessors are not averse to early termination of lease and either replacing it with a lease for one of the A320neo family aircraft or just nothing.

Lessors look for long-term relationships and the advantages of paying on time and growing successfully mean that IndiGo can do what it is currently doing.