Himatsingka Seide: Can a blend of sales growth & cost savings shore up earnings?

While incremental improvement may not be visible in the coming quarter, the company’s gross margins are expected to inch up starting Q4FY18.

Himatsingka Seide's numbers in the recently concluded quarter were steady. 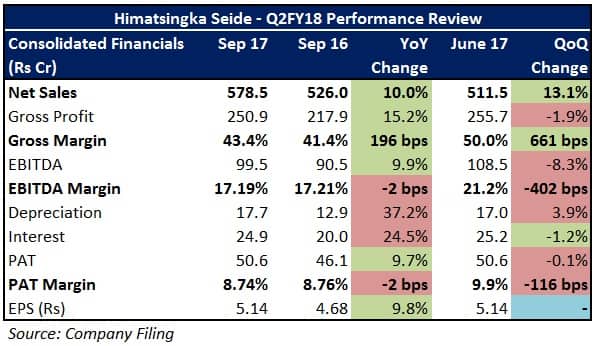 Although a topline growth of 10 percent led to a similar jump in operating profit, the capex-induced increase in depreciation and interest cost led to single-digit growth in profitability.

Utilisation levels at Himatsingka’s new sheeting unit (capacity – 23 million metres per annum), that got commissioned in December 2016, were stable (at approximately 40-45 percent) during the quarter.

The company also commenced trial production at its newly set-up spinning facility. Furthermore, turnover from branded products amounted to roughly Rs 700 crore for the first half of FY18 (at 64 percent). However, GST-related compliance caused working capital requirements to increase.

Uptick in utilisation rate (pertaining to the company’s expanded sheeting capacity) is likely to take place from FY19.

Construction of the terry towel project (capacity - 25,000 tons per annum) will be initiated in H2FY18, whereas commissioning of the same will take place a year later. An asset turnover of 1.5 to 2 times, coupled with the company’s impetus on branding activities, could augment top-line growth from this front.

Himatsingka’s spinning plant is on course to be operational by December 2017. In addition to providing inputs to the company’s additional sheeting capacities, the fine count yarn output may be alternatively considered for sale to specific clients, subject to adequate demand.

The company will focus more on selling its in-house cotton-made bed sheet brands (Pimacott, Organicott, Homegrown), besides increasing the percentage contribution of branded goods to the total turnover.

Himatsingka’s initiatives to gain market share in European nations, particularly in the premium to medium price range, may gain pace in the next fiscal.

A lot depends on US

Notwithstanding the stability in the US economy, the demand scenario at the retailers’ end in the region is fairly subdued at the moment. A strong rupee vis-à-vis the dollar may only make matters worse.

For Himatsingka, the degree of geographic concentration risk is high since it derives a considerable chunk of its revenue from North America.

Though incremental improvement may not be visible in the coming quarter, the company’s gross margins (by virtue of backward integration towards yarn manufacturing) are expected to inch up starting Q4FY18. FY19 should see traction in earnings on the back of sales growth and operating leverage.

At 13.3x FY19 projected earnings, the stock appears to be reasonably priced and can be considered for gradual accumulation.