Zepto was started by 19-year olds Aadit Palicha and Kaivalya Vohra, who dropped out of a computer science engineering program at Stanford University

While the talks did not fructify, the fact that these conversations happened underscores the competitive intensity in the quick commerce space in India and shines a light on how larger rivals view upstart Zepto.

"The talks happened with Zomato as well as Swiggy. However, the conversation did not reach an advanced stage where term sheets were signed. The valuations offered were pretty aggressive, it was a significant premium to the last round the company raised, which was at a valuation of $570 million," one of the sources mentioned above said.

A second source said while Zomato approached Zepto with a buyout offer of close to a billion dollars, the latter also tested the waters with Swiggy. However, while Swiggy's top leadership met Zepto, it did not reach the offer stage.

"For Swiggy, it was about consolidation and taking out a competitor from the market. It did not reach a stage where they discussed how Zepto would be integrated with Swiggy's Instamart grocery delivery service. It would have mostly been an acquihire, with Instamart's current team continuing to run the operations," a third source said.

In Zomato's case, it wasn't clear if Zepto would have carte blanche over the entire quick commerce piece, considering Zomato has also backed Blinkit, which competes with Zepto. "Aadit (Zepto's founder) ultimately decided to build out his company independently and is now raising a funding round that will value it at $1.1 Billion dollars," the source added.

While Swiggy did not respond to Moneycontrol's query, Zomato said it had no comments to offer. Zepto also said it will not be commenting on speculative stories.

Zepto, which was founded in late 2020 and launched services from April 2021, was started by 19-year olds Aadit Palicha and Kaivalya Vohra, who dropped out of a computer science engineering program at Stanford University. Brought up in Dubai and from families that had a background in business, they dabbled with ventures early on. While in school they started up their first venture GoPool, a ride pooling app which was acquired by a Dubai-based firm.

Inspired by the stories of unicorns (startups valued at a billion dollars and above) coming from India, they came to Mumbai to try their luck with entrepreneurship for the second time. This was also around the time when pandemic-induced nationwide lockdowns made it hard to arrange for basic essentials. 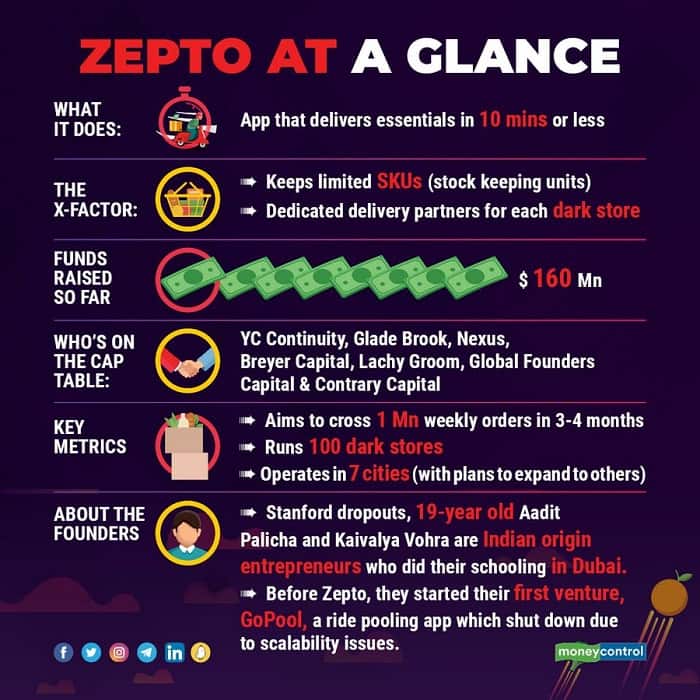 They decided to start a venture that would solve this problem- initially by partnering with local offline shops or kiranas to deliver essentials. However, they soon realized that quick delivery is hard to execute without dedicated dark stores(mini-warehouses). So, they shut KiranaKart and set up Zepto.

As they saw a massive jump in customer experience metrics for 10-minute delivery, when compared to 30 or 45 minutes, they made it their sweet spot. Palicha recently told Moneycontrol that Zepto's average delivery time is 8.47 minutes.

Zepto's strong operating and execution chops attracted investors and steep valuation in a short span of time, amidst the funding boom in Indian startups.

Last month, it raised $100 million in a round led by YC Continuity at a valuation of $570 million, within months of raising $60 million in its first institutional round. Nilam Ganenthiran, the President of Instacart, and Ravi Inukonda, a senior executive at DoorDash also participated in the round. As it happens, growth equity firm Glade Brook Capital, one of Zepto's investors, also invested in Zomato a couple of years ago.

While the jury is still out on whether people actually need essentials in 10 minutes and if this is a sustainable business model, Zepto's alacrity has made its rivals sit up and take notice. Its recent conversations with Zomato and Swiggy have only cemented it as a credible threat. It is also making rivals change tack and double down.

SoftBank-backed Blinkit (previously Grofers), in which Zomato has a 10 percent stake, recently pulled the plug on areas that it cannot service within 10 minutes.

"We are singularly committed to instant delivery-focusing only on areas where we are serving under 10 minutes," Blinkit founder and CEO Albinder Dhindsa said.

Swiggy, which also counts SoftBank as an investor, is investing $700 million in its express grocery delivery business Instamart, throwing down the gauntlet to rivals.

Blinkit and Instamart recently claimed that their weekly order volume has crossed 1 million. While Zepto did not disclose its numbers, Palicha said that at the current pace of growth, it would handily surpass rivals in the next few weeks.
Invite your friends and family to sign up for MC Tech 3, our daily newsletter that breaks down the biggest tech and startup stories of the day