India will have 200 unicorns by 2025: NASSCOM-Zinnov Report

After the record amount of funds raised by the Indian startups, which stood at $24.1 billion, and 70 unicorns at the end of 2021 amid the pandemic, the sector is set to grow to 200 unicorns by 2025, according to a report.

The report titled 'NASSCOM Tech Start-up Report 2021 – Year of the Titans', launched in partnership with Zinnov on January 21, revealed that the kind of growth the ecosystem saw in 2021 was so unprecedented that it reached the 2025 milestone in 2021.

As a result, the industry body has now revised the 2025 prediction. Going by the current estimates, the Indian startup ecosystem will have 37,000 tech startups and 180-200 unicorns with a cumulative valuation of $600-700 billion. Currently, the valuation stands at $320-330 billion. 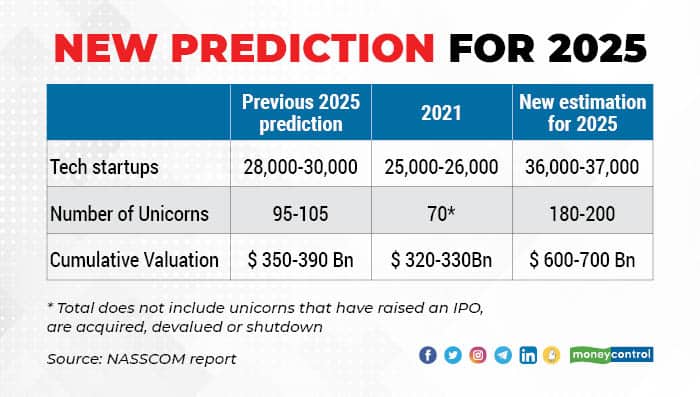 When it comes to average funding deals, the increase was 3X increase exceeding the $100 million mark. This demonstrates investor confidence with a pool of active Angel investors of 2400+ and a readiness to take significant risks. While the US remains the leading source of foreign direct investment in start-ups, global involvement is also growing. For instance, 50 percent of the deals had at least one India-domiciled investor, the report said.

The year saw participation from the corporate as well. Of the 260 corporates that participated in the startup ecosystem, close to 175 made significant investments.

Union Minister Piyush Goyal, who launched the report, said, “The new India is today being led by a new troika of Innovation, Technology, and Entrepreneurship - ITE which will grow even further than the original ICE - Information, Communication, and Entertainment.” Commenting on the NASSCOM report, Goyal said that it clearly highlights the outstanding performance that Indian startups have demonstrated over the last few years.

In addition, Goyal highlighted the growth of the tech-startup industry and its role in the road map to new India, before virtually launching the report. “The Indian startup movement will become the harbinger of wealth creation for 1.35 billion Indians aspiring for a better quality of life,” he added.

Debjani Ghosh, President of NASSCOM, said, "The performance of the Indian startup ecosystem in 2021 has proved the resilience and dedication being put by multiple startups across segments. The ecosystem has grown immensely and positioned itself as a vital contributor to the growth of India's digital economy.”
Moneycontrol News
Tags: #Nasscom #Startup Funding #startups #Unicorns
first published: Jan 21, 2022 04:48 pm