EconomicSurvey: India recognised 14,000 new startups in 2021, 555 districts in India had at least one new startup

India has over 61,400 startups recognised by the Department for Promotion of Industry and Internal Trade (DPIIT) with at least 14,000 recognised during financial year 2022, said the Economic Survey adding that 555 districts in India had at least one new startup.

With this almost 75% districts of the country is likely to be having at least one startup each. 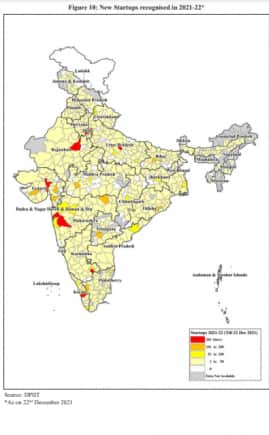 The country also generated a record 44 unicorns in 2021 taking the overall tally of unicorns in India to 83 with most being in the services sector.

As per the survey, with 44 unicorns India becomes the third largest country in number of unicorns. It overtook the UK to emerge third after the US and China which added 487 and 301 unicorns respectively in 2021. startup nation leaving behind UK.

Unicorns are startups that achieve a valuation of $1 billion.

Noting the significant rise in the number of unicorns in India, last month even Commerce and industry minister Piyush Goyal said that the startup ecosystem in the country must target adding 75 unicorns in 2022.