2021: Meet the top 10 super angels for the Indian startup ecosystem

They are giving it back to the ecosystem that made them what they are today. Meet the super angels of the country who invested in the majority of early-stage deals involving startups.

For this year, there's no prize for guessing who tops the list. It's the founder of fintech firm Cred: Kunal Shah.

He is his own ecosystem, close aides recently told Moneycontrol adding that he is disrupting how entrepreneurs part with money. Shah often invests after receiving pitches on a WhatsApp message and has bet on 78 startups this year through 81 funding rounds. Some of his top investments include Ananth Narayanan's unicorn Mensa Brands, bike taxi platform Rapido and logistics aggregator Shiprocket.

Shah is closely followed by Kunal Bahl and Rohit Bansal, co-founders of Snapdeal who mostly invest in startups through an investment vehicle called Titan Capital. While Bahl invested in 36 startups, Bansal did so across 34. One of the most interesting investments made by the duo was in social gaming startup Hike in a round which was led by co-founder of Tinder, Justin Mateen. 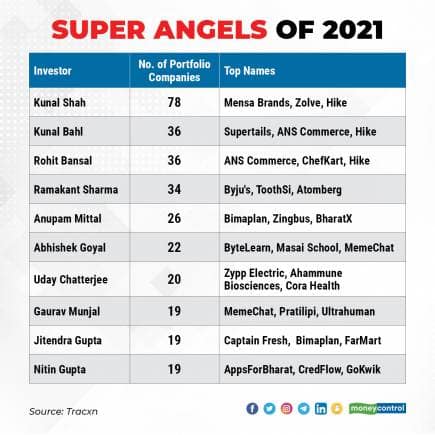 Ramakant Sharma, founder of home and interior platform Livspace, turned another super angel with investments across at least 33 startups in 2021. Sharma, whose own company is also in advanced talks for a unicorn round, recently became an angel in edtech giant Byju's after it acquired younger rival Toppr in which he had invested early on.

Founder of Shaadi.com and People Group, Anupam Mittal, also came up as a founders' favourite with investments across at least 26 startups this year. Some of the remarkable investments he made include those in intercity mobility startup Zingbus and fintech startup BharatX.

Uday Chatterjee, who is a lead angel of Indian Angel Networks, remained active across health and electric vehicle startups with investments in around 20 startups. Hyperlocal and electric vehicle-based last-mile delivery startup Zypp Electric and nutrition and health foods firm Cora Health were some of his marquee bets.