Celebrity Homes | At artists Jayasri Burman and Paresh Maity’s house, songs of parrots and a special place for Durga

Everything in the three-storey house was done up after careful consideration of each others’ wishes. The result: special places reserved for the couple's own art, separate work areas, and more.

Jayasri Burman and Padma Shri Paresh Maity’s three-storey home in Delhi’s Greater Kailash-II Enclave is a labour of love. Here, the artists have put down, along with their roots, things collected lovingly over the years.

“It has not been conceptualized by a designer, it’s a home,” says Burman. So don’t expect soulless trending off-whites in fabrics and furnishings. “Everything’s usable, we have things here that we need; the table where we sit to read the paper or our books. It’s a comfortable space,” she says.

The couple moved to this house from Chittaranjan Park after feeling the need for more space and everything was done up after careful consideration of each others’ wishes. “We put things together, but had to adjust to each other’s tastes. I am more practical and Paresh loves bright colours, so the home reflects both,” says Burman.

And that’s a relief, she laughs, because a friend had warned her about “couples often divorcing over petty quarrels while setting up their home”. Laxmi by Burman (left) next to a painting by Ganesh Pyne and Sculpture by Ravindra Reddy.

“Paresh and I are like the North and South poles. He is disciplined, neat and organised, much better than I am, I feel,” says Burman. “I am not a perfectionist, I like to laze around, do things differently, but bhalo basha (to love someone) translates to us being keenly aware of how the other person thinks. So we listen to each other and respect each other’s thought processes.”

Spaces also evoke childhood memories. “I grew up in Kolkata in a big house that had the typically Bengali lal mejhey (red flooring), a dalan (balcony) and a pujo ghor (puja room) on the roof terrace. We had a lot of people living at home, cousins and others, so it was a little crowded. That’s why I liked to spend time in the pujo ghor. It was very peaceful,” Burman reminisces. So the alcove in her current home is her favourite spot, a reminder of times past, where she is free to read if she wants to, laugh or weep if she wants to, or think if she wants to.

“It’s like a doll’s house when you are a little girl, it’s your own space to play with,” says Burman, even though it’s not a secluded area. Everyone can access it from the bedroom or hall. Apart from a sofa, a television set and a study table, it has a singhasana (throne) presided over by Durga painted by Burman. For other thakur (idols), she religiously follows little rituals – bathing them, changing their garments and putting on their ango bhushan (jewellery).

The artist, who works mainly with watercolour and paints and sculpts devis and mythical figures, also uses the space to sketch, read and write, sometimes late into the night. 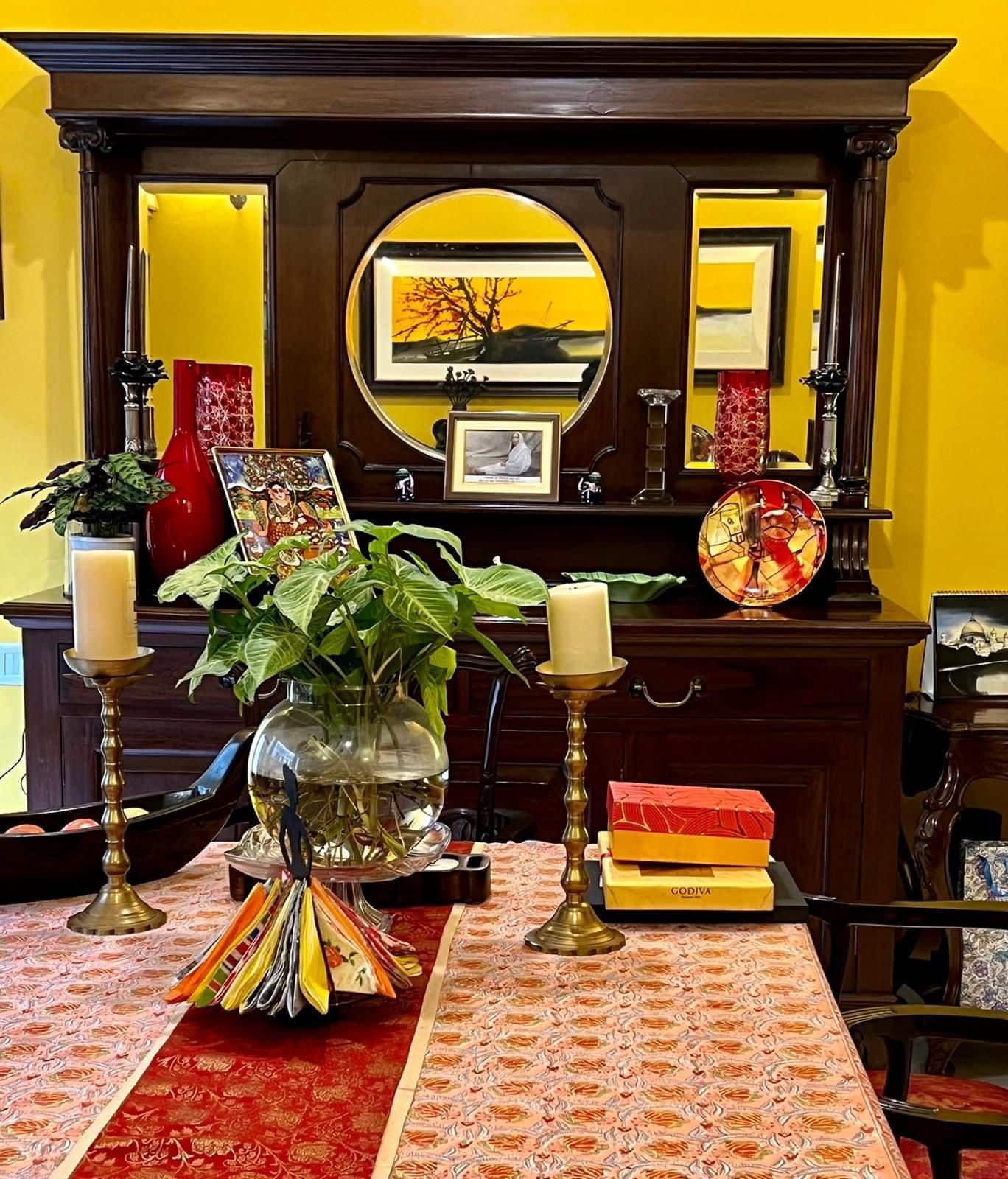 The dining area with a table that's usually laden with Bengali fare.

An alumna of Kala Bhavan in Shantiniketan and the Government College of Art and Craft in Kolkata, Burman also considers herself lucky to have a house with a verandah that faces a government nursery. So the first things she gets to see in the mornings are green trees, parrots, pigeons, squirrels and shalik (common mynah).

“One never grows up,” she reminisces. “As children we thought that spotting a single mynah was not a very good sign, and even now, when older and worldly wise, one feels uneasy for an instant when one spots that single shalik. It’s like becoming a child again,” she says.

Both from Bengal, Burman and Maity love to be reminded of their home state. So some parts of the house have traditional patang chal (black and white tile) flooring. Like her childhood home, the kitchen adjoining the dining room is huge where Burman, who has “grown up with so many people at home I cannot cook for one person” happily makes her macher jhol (fish in gravy), chutney, dal (lentils) and bhat (rice).

“My mother is from purba (East) Bengal (now Bangladesh) so my food has liberal doses of paanch phoron (five spices) and mustard oil. However, as we are a health-conscious family, we don’t have oily, fried food. What’s cooked is very light,” she says.

Guests are entertained in the living room, where the furniture is more about comfort than aesthetic appeal.

The couple has special places reserved for their own art. Burman is particularly fond of the painting Benaras, by Maity. “This piece takes me back to the city that both of us love. We wander around the ghats and enjoy the beauty and colours of the place. I am mesmerised by how people there accept life, by their energy. Even the poorest of the poor seem so alive and happy. The woman selling things by the roadside does it with so much of grace.”

Burman and Maity visit Varanasi almost every year and make it a point to be out on a boat on the Ganga when the night turns magical, lit by the flames of the evening aarti. It fires their imagination, runs as a theme in their work. “Mine is from a mythological point of view and Paresh does landscapes,” says Burman.

The sculptures that stand in the garden include Trinayana by Maity and Prakriti by Burman. Kiss, sculpted by her husband, is very special too because “It has a certain dynamism, which gives you a good feeling”, she says.

Apart from that, art by her kaku (uncle) Sakti Burman and his wife Maite Delteil, Ganesh Pyne, S.H. Raza, Satish Gujral and Ravindra Reddy also find pride of place on the walls, in the corners and in special niches. The puja area, presided over by Durga painted by Burman.

Little things make a difference – the tulsi manch, for instance, in the garden where a diya and incense sticks are lit every day. One does not have to be particularly spiritual to do that, feels Burman, but the good vibrations do help.

Another favourite is a picture by her fashion photographer son – of a limbless man asking for alms. Its starkness and pathos move her and that’s why she says she looks up at it often when working in her studio and almost always feels warmly connected to her son.

The COVID-19 period has left the couple confined at home most of the time. “Paresh works in the hall during the day, as he doesn’t like to be up too late at night. I work in the basement, which has all my tools. I am very happy there,” says Burman.

And even then, though the world has almost closed down, little things at home count for the artist. “There is inspiration in the light that shines down through the leaves, in the colours that surround us. Every day, we discover new things,” she says. 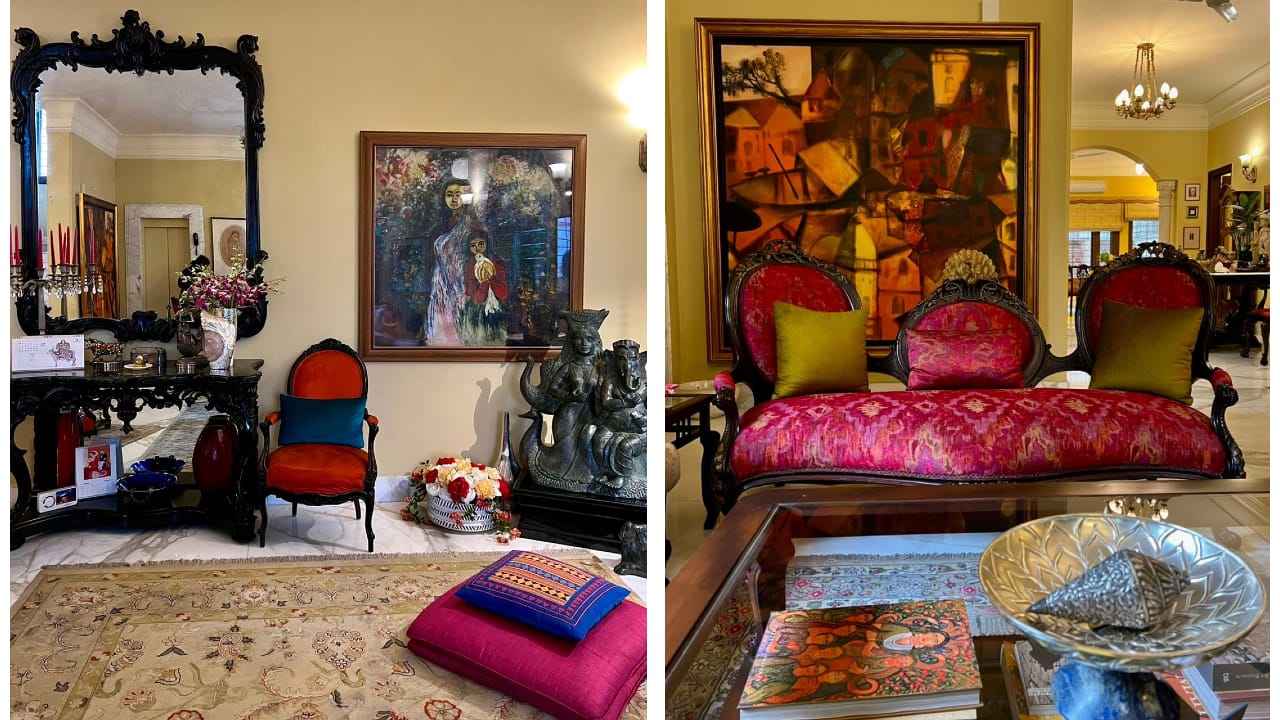