Wish to be the guardian for a COVID-orphaned kid? Here’s how you can get legal and financial information

If you are the guardian of a child, you need to ensure that the kid gains access to the assets his/her parents might have left behind.

The COVID-19 pandemic’s second wave unleashed misery across the country, leaving behind lakhs of distraught families. Children who lost both their parents find themselves in vulnerable positions. A special focus may be necessary to take care of their needs. In the first of this two-part series, Moneycontrol delves deeper into the institutional framework in place for their care as also their guardians’ responsibilities as per law. We will also look into the difficulties in sourcing financial information relating to the kids' parents.

The second wave of COVID-19 in India may seem to have ebbed for now, but it has left behind shattered families struggling to pick up the pieces. Amongst those worst-affected by the pandemic are children who have lost both their parents.

Take the case of two Delhi youngsters, aged 20 and 18 , for instance. They lost both their parents within a span of a few days. Distressed, they had been contemplating suicide, before the Delhi police swung into action and placed them under their relatives’ care.

Another heart-wrenching tragedy emerged from Odisha, where a seven-year-old girl had to turn caretaker for her new-born brother, as both her parents succumbed to the illness within a month.

According to NCPCR’s June 5 affidavit in the Supreme Court, over 3,500 children across the country have lost both their parents due to the deadly disease. In addition, nearly 26,000 kids have had to deal with the loss of at least one parent. 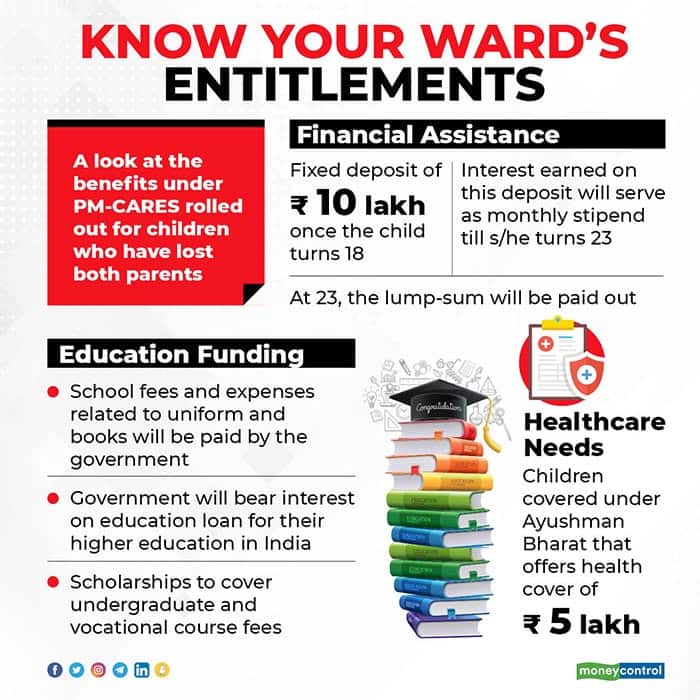 The central and state governments have stepped in to offer financial aid to such children, besides providing institutional support. “The Juvenile Justice Act is in place for all children who need care. District-level child welfare committees comprising social workers, doctors, activists and psychologists are tasked to ensure their well-being. These committees draft individual care plans for such children to identify guardians they will stay with if relatives are willing to step in or consider giving them for adoption or moving them into institutional facilities,” explains Priyank Kanoongo, Chairperson, National Commission for Protection of Child Rights (NCPCR).

Specifically for COVID-19, the committees have been tasked with additional responsibilities. “The committees’ social investigation reports will include details of parents’ property, bank account, pension and loans. They are also enlisting the district legal services authority’s assistance for transferring the properties to the children,” says Kanoongo. NCPCR has also written to the Reserve Bank of India (RBI) to issue directions to banks to expedite the process of bank account transfers. Likewise, it has approached the Insurance Regulatory and Development Authority of India (IRDAI) to prioritise life insurance claim settlements for such children. “Employees’ Provident Fund Organisation (EPFO), on our request, has already asked its regional offices to interact with state authorities to ensure such children start receiving family pension,” he adds.

Also read: Lost loved ones to COVID-19? Here’s how you can track their assets and investments

Institutional facilities are seen as the last resort, with authorities and activists preferring to place such kids under the care of their relatives. “If there is no one to take care for such children, we step in and present the child in front of the CWC, which then gives us directions on the future pathway. We look for family members – grandparents or parents’ siblings – who are willing to take on the responsibility,” explains an official at Childline, an NGO and the nodal agency of the Women and Child Development Ministry.

If you wish to be the guardian of such a child, you will have to complete certain legal processes before you can officially treat them as your wards. “In such cases, a guardian’s role becomes crucial as they are responsible for handling a child’s finances and welfare till he/she turns 18. Upon the death of the child’s parents and in the absence of a testamentary guardian (that is, a guardian appointed under the Will of the last surviving parent), a guardian can be appointed by a court’s order,” says Rishabh Shroff, Partner, Cyril Amarchand Mangaldas. The applicability will also depend on the religion the families belong to. For instance, in the case of Hindus, the provisions of the Hindu Minority and Guardianship Act, 1956 will apply. “Any friend, relative, or siblings (who are not minors) of an orphaned child can approach a civil court by filing an application for appointment of a guardian and after appropriate scrutiny, the court would appoint a guardian by passing a final order,” he adds.

If you are the guardian of such a ward, you, too, need to ensure that the minor children, through you, gain access to the assets their parents might have left behind.  “The biggest hurdle is that even spouses often have no idea about the investments their family members might have made. Children are even less likely to be aware. The legal process to take over as the guardian of a child is very arduous. It does make sense for all individuals to at least orally inform their close relatives other than immediate family members of insurance policies they may have,” says Rishabh Parakh, Founder, Money Plant Consultancy. Recently, he advised an elderly Pune-based lady on accessing her husband’s assets after he passed away due to COVID-19. “After scrutinising her documents, we realised that he had invested a substantial amount in mutual funds and the current value of these investments stood at Rs 75 lakh. She was not aware of this significant investment,” says Parakh.

Pankaj Mathpal, Founder, Optima Money Managers has a similar incident to narrate. “The brother of a lady who had lost her husband due to COVID-19 reached out to me recently. The deceased had taken a home loan and his wife was faced with the uphill task of repaying the loan. However, after going through the home loan file, we found – as I had expected – that he had signed up for a group credit life, or home loan insurance plan, sparing his wife the distress of having to repay the loan or let go of the property,” he explains.

Preeti Kulkarni is a financial journalist with over 13 years of experience. Based in Mumbai, she covers the personal finance beat for Moneycontrol. She focusses primarily on insurance, banking, taxation and financial planning
Tags: #Covid-19 #financial planning
first published: Jul 2, 2021 09:36 am