Is it time to invest in passive mid-cap funds?

Compared to large-cap schemes, mid and small-cap mutual funds (MFs) have found it easier to outperform their own benchmark indices in recent years.

But it is becoming increasingly challenging for mid-cap funds to consistently outperform their benchmark indices. This difficulty has arisen due to two reasons: the re-categorisation of mutual funds and the basket of what constitutes large, mid and small-sized companies. Also, only a few select stocks did well. Can mid-cap funds continue to outperform benchmark indices? Or, should you start looking at passively-managed mid-cap schemes?

The outperformance of mid-cap funds was dismal during 2018. That year, just about five of 21 schemes in the mid-cap category gave returns higher than their respective benchmarks. 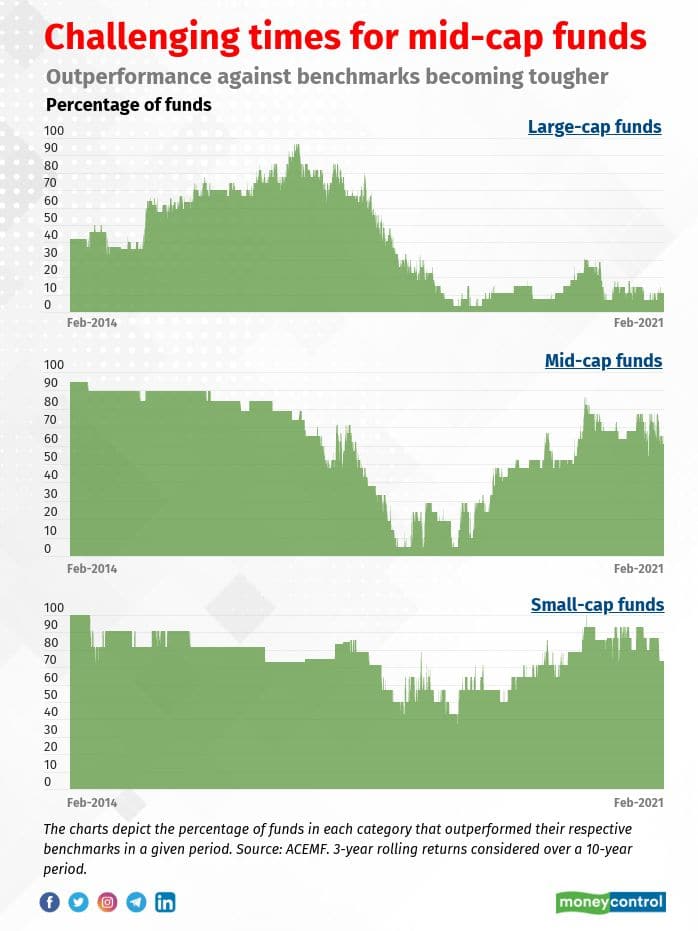 Vinit Sambre, Head-Equities of DSP Mutual Fund, explains that the massive mid-cap rally between 2014 and 2017 benefitted mid-cap funds – even those that bought junk stocks. Many such stocks corrected in 2018. This has led to most mid-cap funds underperforming their benchmarks subsequently.

Manish Gunwani, CIO-Equity Investments, Nippon India Mutual Fund adds, “In mid-cap indices, at least the top seven to eight holdings are actually large-caps. When the market became very narrow in 2018-19, such large-caps in the mid-cap indices didn't fall. What tends to happen is that mid-cap funds typically held mostly mid and small-cap stocks that later corrected significantly, thus causing underperformance against their benchmarks.”

In 2018, the capital market regulator, Securities and Exchange Board of India (SEBI) re-categorised all schemes into 36 categories.

The positive outcome to this move was that most equity funds became true-to-label, standardised and their benchmark indices also became more reflective of where the schemes actually invested. But the re-categorisation also narrowed the list of stocks that mid-cap funds could now invest in. “The SEBI norm that required investing at least 65 percent in the 150 mid-cap stocks starting from 2018 forced mid-cap funds to operate within a controlled universe,” says Sambre.

Gunwani of Nippon India MF adds that prior to SEBI re-categorisation of 2018, many mid-cap funds used to hold stocks that were later classified as small-cap stocks. The line of distinction was blurred in the past. Most mid-cap funds had to prune such small-cap allocation in their portfolio.

There was no strict definition of small cap companies before the re-categorization exercise. Informally, small cap stocks used to be those with a maximum market capitalisation of around Rs 3000 - 5000 crore. But the new classification of small-cap stocks meant that all companies with a market capitalisation of up to around Rs 9,000 crores which were also considered as small-caps.

So far, active mid and small- cap funds have done well. Investors who have held such funds in their portfolios have benefited over the long-term. But the wind of passively-managed funds has been moving towards mid-cap funds as well. Currently there are eight passively managed funds: six of these track mid-cap indices and two follow small-cap benchmarks.

Sandip Sabharwal, of asksandipsabharwal.com believes that “Small and mid-cap funds should continue to outperform at least for the next 5-10 years.”

The other challenge for mid-cap funds is a growing corpus size. Fund managers say that if a large-sized fund invests even 1-2 percent of its corpus in a small-sized company, it could end up buying a 30-40 percent stake in the company. This makes the holdings illiquid. So the universe becomes more and more restricted for large-sized mid-cap funds.

Deepak Jasani, Head Research, HDFC securities explains, “In bullish times, active mid-cap funds could do better than the passive schemes, while in bearish times, passive funds typically fall less than the active funds due to their spread out holdings and absence of bias of the active fund manager.” To be sure, all passively-managed mid-cap funds were launched recently and therefore lack a long-term track record.

Active mid and small-cap funds will serve the purpose of high-risk investors in meeting their goals over the long run. Sambre of DSP Mutual asks retail investors to restrict themselves to good-quality businesses and companies, though the return may be a bit lower than the general average.