HSBC Mutual fund makes a second attempt at launching a mid-cap scheme: Should you invest?

The earlier HSBC Midcap Equity Fund fund was launched in 2005, but got converted into a small-cap scheme in 2018 after SEBI's reclassification exercise

Mid and small-cap funds have been the flavour of the season over the past year or so. And HSBC mutual fund doesn’t want to be left out. It has launched a new HSBC Mid Cap Fund (HMF).

HMF will invest at least 65 percent of its assets in the stocks of mid-sized companies. As per the standardised definition followed by the mutual funds industry, these are companies ranked between 101 and 250 in terms of their market capitalisation.

“Mid-cap companies offer a good opportunity to retail investors for multiplying their wealth over the long term,” says Sambath Kumar, Head of sales at Spark Alternative Asset Advisors. These companies are at a relatively early stage in their life cycle. This means, if the fund manager picks a well-managed mid-sized company, she can earn higher returns than from a typical large-sized firm that is well-discovered.

Over the long run, midcap funds have outperformed large-caps and have generated similar returns as small-cap schemes (see graph). 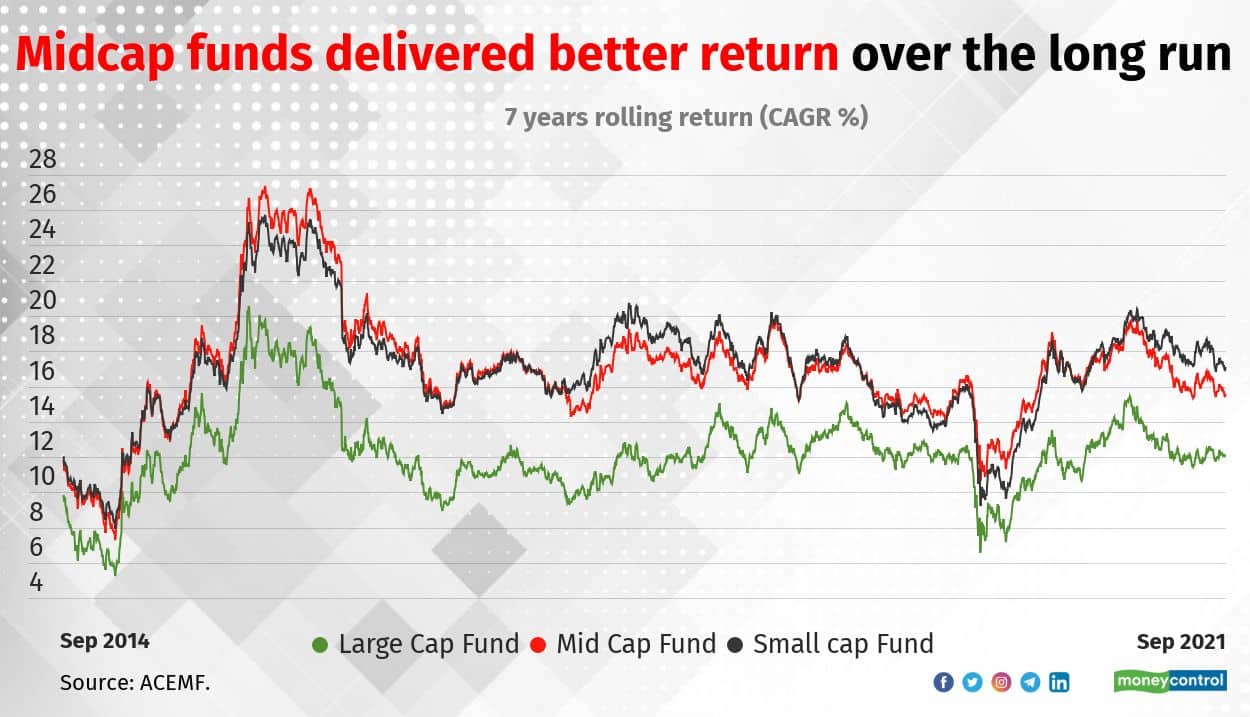 The fund might also invest 15 to 20 percent of its corpus in small-cap stocks. This, Pradhan says, ought to boost the scheme’s returns further. “After the disruption due to COVID, the economy has moved into the restoration phase; the fund will benefit as the economy moves from the restoration phase to the expansion phase. Typically, midcaps have known to grow faster in the later stages of an economic cycle. Coupled with an expansionary budget, supported by higher global growth and an accommodative stance from the RBI locally, we see a robust earnings cycle emerge,” he says.

This is not HSBC MF’s first attempt at managing a mid-cap scheme. Earlier too, it had a HSBC Midcap Equity Fund. The fund was launched in 2005, but got converted into a small-cap fund in 2018 after the massive reclassification exercise initiated by SEBI. The older mid-cap scheme had an average track record. It had assets of just about Rs 600 crore in 2018. In fact the scheme has seen outflows; its present corpus (the scheme is now called HSBC Small Cap Equity Fund) is just Rs 350 crore.

HSBC MF’s track record does not inspire confidence. In our internally developed star ratings and rankings that form the foundation of MC30 Moneycontrol’s curated basket of mutual fund schemes, HSBC MF hasn’t made any serious inroads. Four of its equity funds qualified across the 11 categories. The best that any of its schemes did was to have earned a 3-star rating.

In fact, the earlier mid-cap fund had underperformed the benchmark index; HSBC Small Cap (formerly HSBC Midcap Equity Fund) gave a return of 14.9 percent since inception till it closed, as against a return of 17.1 percent managed by the Nifty Midcap 150 index.

You can give this fund a miss. At present, there are 27 mid-cap schemes available. Many of these existing schemes come with a better and long-term track record. Take a look at MC30 for well-managed mid-cap schemes that come with good pedigree. The good news is that there are ample options