Debt fund investors in a tizzy on spate of bad news; here's what to do

According to data by Morningstar, a total of 10 fund houses had lent to 16 companies belonging to Essel Group

The notion that debt funds are safe has been turned on its head after a spate of bad news from different companies.

Right from the time of the Infrastructure Leasing & Financial Services (IL&FS) crisis that surfaced in September 2018 to the time early this year when IL&FS’s Special Purpose Vehicles (SPV) refused to pay up, mutual funds and debt fund investors have been in a tizzy.

The sharp fall in shares of some Zee companies added to the debt funds’ woes as they were the backing of securities in which many debt funds had invested in.

So, the question arises —  Have debt funds become unduly risky and is it better to stick to just fixed deposits? But firstly, what should you do if you have investments in debt funds that have invested in these companies? Should you sell or should you stay invested?

After the defaults by IL&FS and some of its subsidiaries in September 2018, one special purpose vehicle (SPV) promoted by IL&FS declined to pay dues to its creditors (mutual funds being among them) in January 2019, despite having enough cash, due to their interpretation of an order by National Company Law Tribunal.

A day after this default, rating agency Crisil downgraded the credit rating of two SPVs. Some schemes of fund houses like Aditya Birla Sun Life Asset Management Co (AMC), HDFC AMC and UTI AMC took a hit as they marked down the values of their investment in these SPVs though they had not defaulted yet.

The net asset values of these schemes have fallen accordingly.

In January 2019, fall in shares prices of some companies added to debt funds’ woes. Many funds had lent to companies against their group companies’ equity shares as collateral.

But when share prices fell, the value of the collateral fell, too, exposing debt funds to a big risk. On January 25, shares of Zee Entertainment Enterprises (ZEEL) fell 26% and those of Dish TV India fell nearly 33%.

It was mainly on the back of a news report, released two days before, that said the Essel Group has connections with Nityank Infrapower which was being investigated by the Serious Frauds Investigations Office for allegedly depositing over Rs 3,000 crore post demonetisation.

According to data by Morningstar, a total of 10 fund houses had lent to 16 companies belonging to Essel Group. Some of this money lent was backed by shares of the above companies that were pledged. 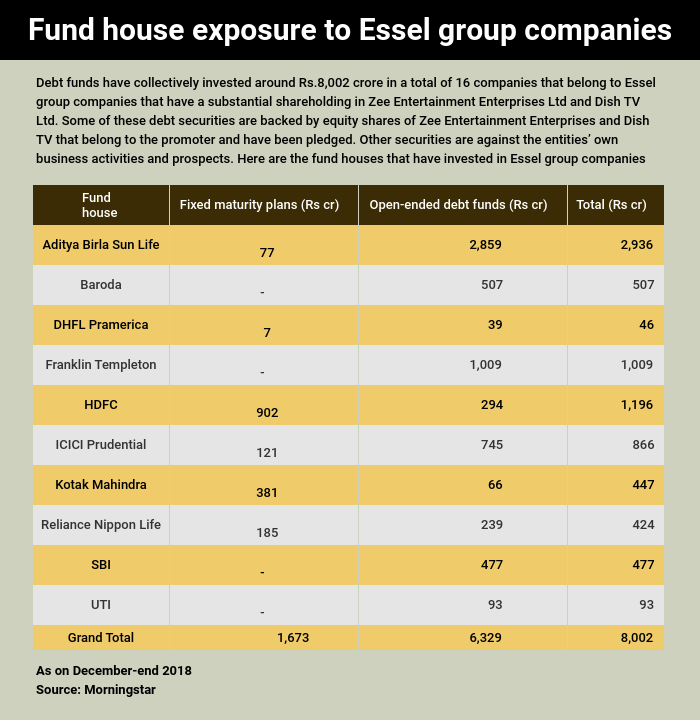 As per a Brickwork Ratings’ statement dated November 29, 2018, some Essel Group companies, like Sprit Textiles Private Limited,  had issued several non-convertible debentures where other companies in the group had pledged shares held by them in ZEEL and Dish TV.

The security cover for all lending by mutual funds was 1.5 to 1.75 times. In simple words, if a mutual fund lends Rs 100 to Essel group, the group would pledge shares worth Rs 150-175 with the mutual fund. If the share prices were to fall below this limit, then the borrower (Essel Group in this case) would make good the loss by paying cash to the fund. Or the fund house starts selling shares and recover cash to protect themselves against a further slide in share prices.

But when Zee shares fell on January 25, fund houses decided not to press for default. Instead, after a meeting with Essel Group, they decided to give time to the group to sell its assets, generate cash and pay up eventually. Fund houses have given time of about six months to Essel Group companies, though Moneycontrol has learnt that two lenders, namely a state-owned bank and a foreign bank, have sold these securities and are not part of this agreement.

Elsewhere, Dewan Housing Finance Corporation’s (DHFL) share price has also been falling since the IL&FS crisis broke out in September. Between September 18, 2018 and January 31, 2019, its share price fell 78%. Further, another online investigative portal alleged that DHFL promoters had lent money to ‘shell companies’ allegedly linked to the promoters who have used this money to buy assets abroad.

Its share price post the accusation fell further, which prompted Care to downgrade the ratings of various debt instruments of DHFL by a notch.

Should you sell your funds if they have invested in Zee group companies and DHFL?

Fund houses had the right to, perhaps even obligated to, sell shares of Zee and Dish TV that were collateral for the lending, to make good the loss due to falling share prices. If the collateral loses value, debt funds are obligated to protect their investors against possible future defaults.

In other words, instead of waiting for a default to happen, debt funds encash the collateral if the value falls, to cut short their losses.

In this case, they did not.

A Balasubramanian, chief executive officer, Aditya Birla Sun Life Asset Management Co. Ltd said selling the shares would have deepened the crisis instead of solving it.

“The companies’ share prices had already fallen on 25th. If everybody (all mutual funds and other lenders like non – banking finance companies) would have started selling shares, the share prices would have further collapsed and nobody would have been the wiser”, he said.

He added the companies still “have strong intrinsic value and there is potential value in the company.”

The group has also denied the news portal’s allegations.

Shyam Sekhar, chief ideator and founder, iThought feels that Zee group will be able to meet its commitments and pay off its debt. He says that if the exposure is very high (he calls a high exposure to a company as greater than 5% of the scheme’s corpus), investors may want to sell it.

Of 164 debt funds that have invested in Essel Group companies, 82 schemes have invested more than 5% in them. Of these, 71 are fixed maturity plans (FMP). 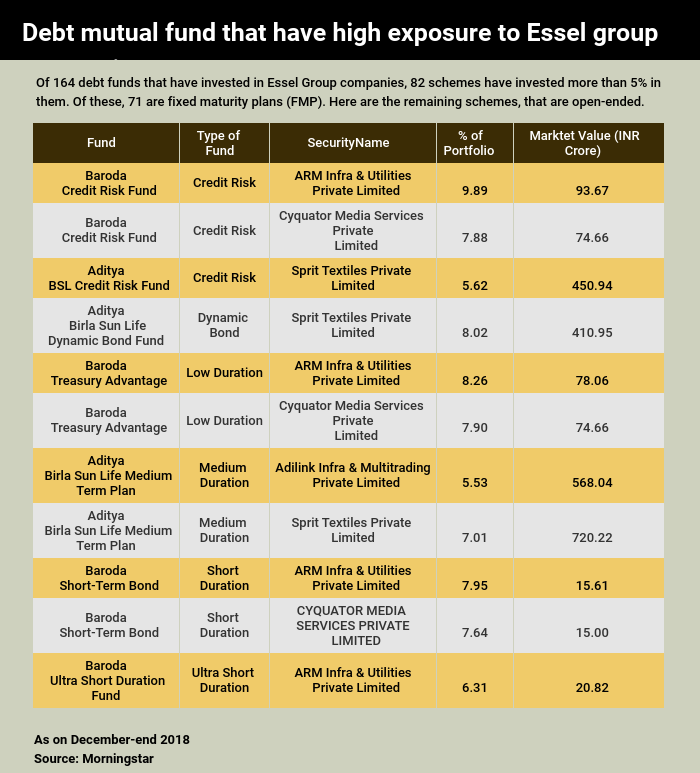 FMPs are closed-end schemes where you money is locked in till they mature.

You could sell these units on stock exchanges, but there is rarely any liquidity for the same and you might have to take a further hit. Stay invested.

Those invested in schemes that have exposure to DHFL, should continue to stay invested as well.

“It is important to examine the level of exposure to by a scheme to any of these bonds. While a lower level to a company such as DHFL will be acceptable given that they have taken effort to fulfill all obligations, higher exposures must be viewed with a good dose of caution” said Srikanth Bhagavat, managing director, Hexagon Capital Advisors Pvt. Ltd. 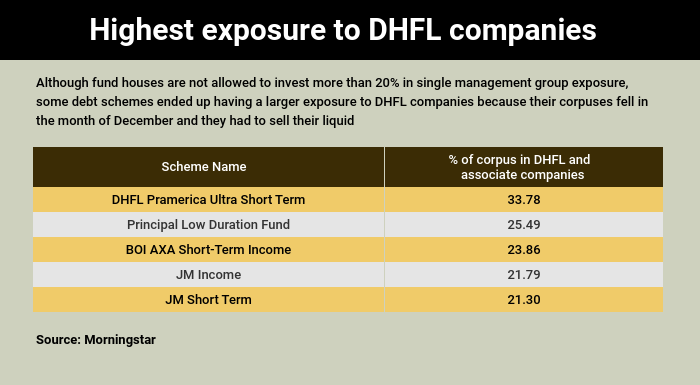 Although debt funds are plagued by problems at the moment, much of it is noise. Besides, if you sell your fund, there is a possibility that you might encounter a similar problem (already there are news of at least one other company trickling in where prices of shares kept as collateral have fallen recently calling for fund houses to review their investments) as equity markets continue to remain volatile.

That apart, many debt schemes invested in these securities have already taken a hit on their NAVs. Any recovery of money would only boost their NAVs. Hence, an exit now would not be prudent for all investors.

The mismanagement at — and the collapse of — IL&FS apart, much of the tremors elsewhere do not call for action yet as they are largely based on allegations that have not been proven. Besides, if the companies pay off their debt to mutual funds — either in their normal course or by selling their assets like how Essel group and DHFL have pledged to do — investors are safe for now. That doesn’t mean you can relax.

Watch this space closely. There is possibility of future potential developments as non-banking finance companies that lend to developers are said to be a bit of stress. Avoid taking too much risk with your debt fund, unless that is specifically what you want to do.Not sure which mutual funds to buy? Download moneycontrol transact app to get personalised investment recommendations.