Aditya Birla Sun Life Equity Fund boasts of a long-term track record. But a large size poses a challenge to the scheme’s future run, especially since it also invests in small and mid-cap stocks.

What is it about?

The scheme has consistently invested around 25-30 percent in small and mid-cap companies. Anil says that although he likes small-sized companies, they would need to grow eventually. “It’s okay to be in a niche business, but the business has to scalable. The company cannot forever remain a small-sized one,” he says. Anil adds that he doesn’t mind paying a good price for a company even if it’s bit more than he’d like. “We believe in getting reasonable growth at reasonable valuations,” he says. 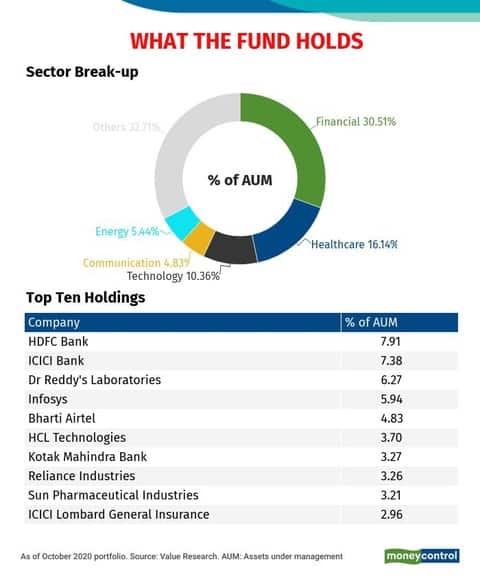 The scheme doesn’t churn its portfolio much. Given its large size and the fact that it invests in firms across market capitalisation, ABEF has a fairly diversified portfolio. It holds 64 stocks as per its October-end portfolio; that’s around the same number of stocks it has held in the past one year. The fund may look a tad over-diversified, but as the scheme grows larger, it needs to maintain liquidity. In falling markets, small and mid-cap stocks can become illiquid and that could hurt a scheme such as ABEG that invests in such companies. The scheme’s top holdings drive its performance; it invests around 45-50 percent of its assets in its top 10 stocks. It has quite a large tail; nearly 30 percent of its corpus lies in companies that constitute not more than one percent of the scheme’s corpus.

Its top three sector holdings are Banking and Financials (30.51 percent), Healthcare (16.14 percent) and Technology (10.36 percent). Says Anil, “Technology and healthcare sectors are well-poised in India. Many companies in these sectors have some of the best balance sheets, best managements and free cash flows. In these sectors, India has the global competitive advantage cost-wise and also some of the highest levels of efficiency and quality.” A high exposure in banking and financials sector is also due to high exposures in it by various indices. Even though an actively-managed fund is free to invest in stocks within or outside the benchmark index, most equity schemes don’t venture too far from their own benchmark indices. ABEF’s top two holdings are HDFC Bank and ICICI Bank. The fund doesn’t hold stocks of any state-owned bank. “Private sector banks have been available at good valuations. Besides, their non-performing asset levels aren’t at alarming levels, unlike some of the state-owned banks,” says Anil.

The scheme doesn’t take cash calls. The scheme has been known to invest up to 10 percent in cash in the past, though on most occasion since January 2019 atleast, it hasn’t held more than three percent of its corpus in cash.

The fund house still hasn’t yet moved to the newly-created flexi-cap category that allows freedom in investing across market capitalisation. Multi-cap category schemes, on the other hand, have to invest at least 25 percent of the assets each in large, mid and small-cap stocks.

Returns: high on the upside, but can be volatile A look at the scheme’s calendar year returns since 2008 tells us that in rising markets, it has almost always outperformed the category average. But when markets went down in 2008 and 2011, as well went up just about marginally in 2019, ABEF underperformed didn’t do much better than its own benchmark S&P BSE 500 TRI as well as the category average.

Explaining the scheme’s recent years’ performance, Anil says that since markets have gone up largely on the back of fewer companies doing well as opposed to a secular run up, it’s possible that equity funds underperform the broader market.
TAGS: #equity fund #invest #mutual fund
first published: Nov 23, 2020 09:51 am