Exclusive Webinar :Don't miss the latest webinar on Global Investing with Passive Products on June 22, 11am
you are here: HomeNewsBusinessMoneycontrol Research

While we remain concerned about the future trajectory of slippage and the low capital position, we draw comfort from the undemanding valuation at 0.6 times FY20e adjusted book .

South Indian Bank (SIB) reported a modest Q2 FY19 earnings, but definitely threw a positive surprise with low slippage, which was especially interesting after the Kerala floods, in one of its key markets. The guidance on slippages is also modest and should ensure positive momentum in the stock after its stock price more than halved in the past six months. While we remain concerned about the future trajectory of slippage and the low capital position, we draw comfort from the undemanding valuation at 0.6 times FY20e adjusted book and recommend a buy at current levels.

Slippage a positive surprise
Slippages in Q2 was surprisingly muted after the high slippage reported in the previous quarter. The management clarified that out of its total exposure of Rs 23,368 crore to Kerala, exposure to flood affected districts was Rs 7,194 crore. Of this, around Rs 700 crore have been severely affected. Of this Rs 700 crore, close to Rs 500 crore is to agriculture and allied and hence qualifies for dispensation. Of the remaining Rs 200 crore, the bank expects close to Rs 100 crore slippage over Q3 and Q4. Hence, instead of its earlier guidance of Rs 400 crore in slippages, the bank is guiding at Rs 500 crore slippage in the second half of FY19. Going by the management commentary, SIB should be able to contain slippages close to Rs 600 crore in the last three quarters of FY19. However, corporate slippages have not been factored. The bank has provided Rs 20 crore for its exposure to the IL&FS group. While the management has not quantified the exposure, from the rating profile change, it is reasonable to assume that it may be upwards of Rs 700 crore. Hence, future provisioning on this count may not be ruled out. While asset quality remained stable, the low provision cover leaves little room for comfort. Interest margin, while flat sequentially, declined significantly compared to the year ago quarter. The management did hint at an improvement with steady repricing of marginal cost based lending rate (MCLR) linked loans.

Asset growth
Asset growth moderated a bit in Q2. Overall advances grew 15 percent driven mostly by growth in retail. Corporate and agriculture grew in teens and SME (small and medium enterprises) segment reported modest growth. The management expects growth in the second half to be much better. 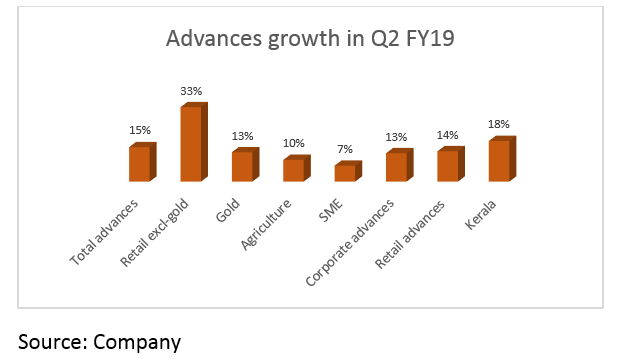 Going forward, garnering low-cost deposits is an area that would warrant substantial improvement if the bank were to improve its competitive positioning and incremental quality of its asset book.

Asset quality was stable with gross and net non-performing assets (NPA) at 4.61 percent and 3.16 percent, respectively.

Capital adequacy ratio has fallen to 12.11 percent and the management plans to raise Tier II capital in the near future.

The undemanding valuation could provide a decent upside should asset quality remain stable in forthcoming quarters.