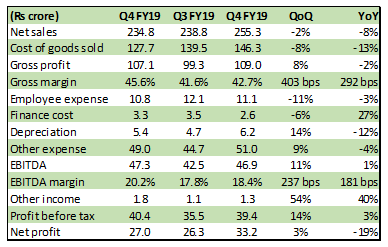 Q4 FY19 sales declined both on a YoY basis and sequentially, mainly due to drop in product prices that offset positive volume growth. The company maintained optimum capacity utilisation of most product categories in spite of challenges to procure key raw material – methanol.

Having said that, the decline in product prices was directionally in line with the contraction of raw material costs. In fact, the company witnessed strong gross margin improvement of 403 bps QoQ (292 bps YoY).  EBITDA margin improved to a decent 20 percent plus, making way for a sequential 14 percent increase in profit before tax despite the sluggish top line numbers.

Furthermore, the company has got the environmental clearance for the capacity expansion of key products - Aceto Nitrile, Morpholine and Di Methylamines HCI (DMA HCL), along with other offerings.

Aceto Nitrile and Morpholine, which are used for end market antibiotic drugs and rubber chemicals, respectively, are the two key products that would add to incremental sales in FY20. DMA HCL is used as a pharma ingredient for Ranitidine and Metformin (diabetic drug). However, new capacity of DMA HCL would be utilised later when the market situation improves.

In case of the subsidiary (55 percent stake), Balaji Speciality Chemicals, the firm is hopeful of environmental clearance in the next two weeks. Here, we take note that company has reduced its turnover expectations from the subsidiary due to delay in environmental clearance. In FY20, it expects an addition of Rs 150 crore from the arm and more than Rs 400 crore in FY21 at current product prices.

Through the subsidiary, Balaji Amines gets an exposure to specialty chemicals like Ethylene Diamine (22,000 tonnes). Key application for Ethylene Diamine (EDA) is for fungicide Mancozeb. It is noteworthy that India imports about 29,000 tonne EDA every year. Among the likely domestic clients for EDA are Coromandel, UPL and Indofil. Coromandel has recently added a 10,000-tonne capacity in the Mancozeb segment, taking the total installed capacity to 45,000 tonnes.

Second, the company plans to start a greenfield project in the first week of Q2 FY20. In the first phase – the capex of Rs 200 crore includes Rs 120 crore debt – the company targets two products, namely additional capacities for ethyl amines and either of Mono Isopropyl Amine or Isopropyl Amine (agri-end markets).

Price volatility in Methanol remains the key concern for the industry dependent on methanol as bulk of it is sourced from the crisis-ridden Iran. As of now, there is no orders from the Government of India to reduce imports from Iran, but having faced the pricing and transactional issues in the recent past, the company has forked out an alternative arrangement for the current quarter.

It sees Qatar, Saudi Arabia and Malaysia as alternative sources for methanol sourcing for India.

Alternative arrangement for raw material sourcing is a positive development. This takes away a major constraint for the company. The quarter gone by was largely positive as the firm was able to execute a superior operating performance amid challenging conditions. We expect incremental revenue in the near term to be guided by ramp-up in capacity utilisation of projects for which the company has got the environmental clearance.

Furthermore, the start of operations in its subsidiary would be an additional growth lever. As far as margins are concerned, in our view, EBITDA margins should settle in 18-21 percent.

Also, over a longer term, we remain positive on the company’s strategy with respect to new product capacities, import substitution along with strong technical execution capabilities.

The stock is trading at 36 percent below 52-week high (10.2x FY20e earnings), which is at a sharp discount to its peers and hence, provides opportunities to accumulate in the near term.