Although the trend continues to be positive, the oscillators are deeply overbought and hence the risk reward ratio for fresh buying is not favourable for Vaishali Pharma.

The market was about to snap a four-day losing streak as it opened higher and traded strong but the correction in the last hour due to Ukraine war wiped out all gains and finally benchmark indices lost more than one percent, continuing southward journey for the fifth straight session.

Most sectoral indices were caught in a bear trap with IT and FMCG being prominent losers with around three percent loss. Bank, auto, financial services, metal and pharma indices were down one to two percent.

Stocks that were in action include Apollo Hospitals Enterprises which was the biggest gainer in the futures and options segment, rising 5.75 percent to Rs 4,816; MRPL which hit a fresh 52-week high intraday and closed nine percent higher at Rs 57.65; and Minda Corporation which ended at record closing high of Rs 251, up 4.78 percent.

Here's what Ruchit Jain of Angel Broking recommends investors should do with these stocks when the market resumes trading today:

After a price-wise correction at the start of the calendar year, the stock has been trading within a narrow range which seems to be a time-wise correction. This entire consolidation has taken place above its 200 EMA (exponential moving average) which is now around Rs 4,425 and is important support.

On the flipside, resistance is seen around Rs 5,000. A breakout beyond these levels will lead to the next leg of directional move and hence traders should look to buy on a breakout above the mentioned resistance.

However, existing long positions can be held till the stock continues to hold above the moving average support. The stock has given a breakout above the previous high resistance with very high volumes. This indicates buying interest in the counter and hence the stock could continue its upmove in the short term.

However, the RSI Smoothened (relative strength index) oscillator on the daily chart is around the level of 90 which is overbought. Hence, one should wait for a corrective move within this uptrend and look for buying opportunities on declines.

The support is placed around Rs 54 and any dip towards that can be used as a buying opportunity for a potential target of Rs 70. The stop-loss for long positions can then be placed below Rs 48. The stock is trading in an uptrend and has recently shown decent outperformance. The previous resistance of Rs 230 is now expected to become a support and hence any declines towards this support could be used as a buying opportunity.

Traders can look to buy the stock on dips around Rs 230 for a potential target of Rs 275 in the next couple of months. The stop-loss for long positions can then be placed below Rs 218. 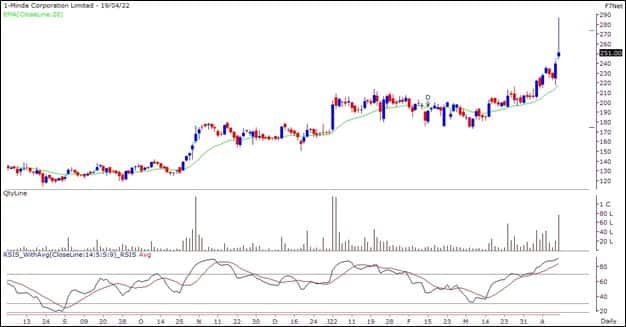 Paper stocks have been buzzing for the last few weeks and this stock has been forming a ‘Higher Top Higher Bottom’ structure which is a sign of an uptrend. The volumes have also been good in the recent upmove and oscillators are indicating a positive momentum.

Traders can look to trade with a positive bias and accumulate the stock in the range of Rs 20-21 for a potential target around Rs 25. The stop-loss on long positions can be placed below the support of Rs 19. This stock has given a breakout from a long consolidation phase in the month of February and since then prices have rallied from Rs 40 to over Rs 110 now. Although the trend continues to be positive, the oscillators are deeply overbought and hence the risk reward ratio for fresh buying is not favourable.

However, traders with existing long positions can continue to ride the trend by keeping a trailing stop-loss. The immediate support for the stock is now placed around Rs 95. 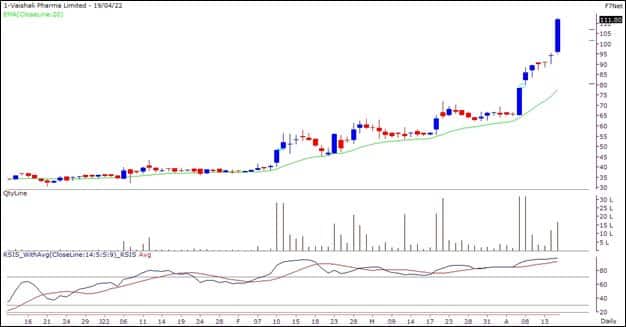