The market rallied on the first day of March series and helped close the week ending March 1 on a positive note on de-escalation of India-Pakistan border conflict and hope of trade deal between the US and China.

The Nifty has been trading in a tight range of 10,930-10,600 for last three months, whereby it has to surpass crucial resistance of 10,930 for heading north on the closing basis, experts said. RSI is placed above 50, suggesting a better possibility of higher closing in the coming week, they added.

"Market is trading around its three major simple moving averages 20-DMA, 50-DMA and 200-DMA that are placed between 10,825-10,860, suggesting strong resistance zone on the higher side," Shabbir Kayyumi, Head - Technical and Derivative Research at Narnolia Financial Advisors told Moneycontrol.

All sectoral indices closed higher with PSU Bank (up 2.6 percent) and Metal (1.8 percent) rising the most. The Nifty Midcap (up 1.44 percent) and Smallcap indices (up 2.7 percent) outperformed benchmark indices.

The market was shut on March 4 (Monday) for Mahashivratri.

Maximum Call open interest (OI) of 18.83 lakh contracts was seen at the 11,000 strike price. This will act as a crucial resistance level for the March series.

Maximum Put open interest of 25.21 lakh contracts was seen at the 10,700 strike price. This will act as a crucial support level for the March series. 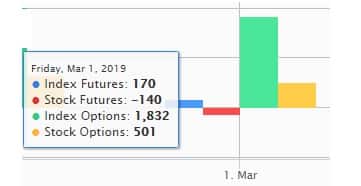 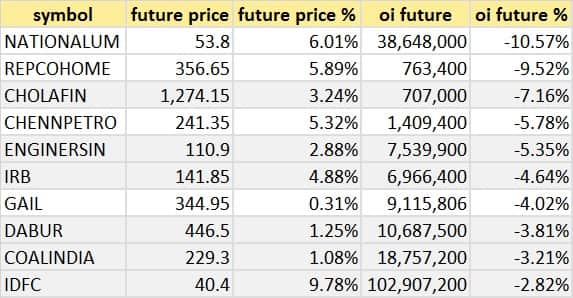 Meghmani Organics: Company, on March 8, will consider and approve interim dividend on the equity shares of the company for the financial year 2018-19.

Tata Metaliks: Extraordinary General Meeting of the shareholders to be held on March 25.

Excel Crop Care: Extraordinary General Meeting of the shareholders to be held on March 30.

Prabhat Dairy: Extraordinary General Meeting of the shareholders will be held on March 26.

Corporation Bank: Extraordinary General Meeting of shareholders of the bank to be held on March 27.

UCO Bank: Extraordinary General Meeting of shareholders of the bank to be held on March 25.

The Investment Trust of India: Board meeting is scheduled on March 7 to consider the scheme of amalgamation of ITI Reinsurance Limited with the company.

Sheela Foam: Officials of the company will be meeting with various investors on March 5 in Mumbai.

Allahabad Bank: EGM of shareholders of the bank scheduled to be held on March 26, 2019.

R Systems International: Investors/analysts call of the company will be held on March 5 to discuss the financial results of the company for the quarter and year ended on December 2018.

Usha Martin: Extraordinary General Meeting of the company to be held on March 30.

Hindustan Fluorocarbons: Board meeting is scheduled on March 11 to consider the sale of 66 acres 13 gunthas vacant surplus land, and entering the agreement with MSTC E-auction.

Valecha Engineering: Board meeting to be held on March 11 to consider the issue of debt securities.

Jet Airways: An additional four aircraft have been grounded due to non-payment of amounts outstanding to lessors under their respective lease agreements.

Hindustan Zinc: Kiran Agarwal is appointed as Additional Director and Chairman of the company.

Mishra Dhatu Nigam: Company secured an order worth about Rs 475 crore. The cumulative order booking during the financial year 2018-19 is about Rs 1,800 crore.

Snowman Logistics: Company appointed Mamoru Yokoo as an Additional Director of the company.

Take Solutions: Company announced mergers of step-down subsidiaries in the US.

Tata Motors: On a media report saying Tata to explore options including JLR stake sale, the company clarified that there is no truth to the rumours that Tata Motors is looking to divest its stake in JLR and it would not like to comment further on any market speculation.

HT Media: Company has entered into share purchase agreements with the shareholders of NRL (the subsidiary of Next Mediaworks Limited), to purchase 3,68,08,001 equity shares (constituting 48.6 percent stake) in NRL.

Shivam Autotech: Company has achieved approximately 29 percent increase in sales in February 2019 compared to the corresponding month in the previous financial year.

For March 5, not a single stock is present in this list.