Trade setup for today: Top 15 things to know before the opening Bell

In the near term, the index may remain directionless, moving between 17,726 and 17,482 levels.Some strength can be expected if it closes above 17,720 but weakness will be confirmed on a close below 17,418, experts said

Range-bound trade continued for yet another session on August 26, the first day of September F&O series, and the benchmark indices closed with moderate gains despite mixed global trends ahead of US Federal Reserve Chair Jerome Powell speech at Jackson Hole.

For the Federal Reserve, the priority was to bring the inflation, which is at a 40-year high, down to 2 percent, Powell said, even though consumers and businesses would feel the economic pain.

The BSE Sensex rose 59 points to 58,834, while the Nifty was up 36 points at 17,559 and formed a bearish candle on the daily charts, as the closing was lower than opening levels.

"In the near-term, the index may remain directionless, confining its move between 17,726 and 17,482 levels," Mazhar Mohammad, Founder & Chief Market Strategist at Chartviewindia said.

Some strength can be expected if it closes above 17,720 but weakness will be confirmed on a close below its 20-day simple moving average of 17,418.

Note: The open interest (OI) and volume data of stocks given are the aggregates of three-month data and not of the current month only.

The maximum Call open interest of 18.92 lakh contracts was seen at 18,000 strike, which will act as a crucial resistance in the September series.

The maximum Put open interest of 29.84 lakh contracts was seen at 16,500 strike, which will act as a crucial support in the September series.

A high delivery percentage suggests that investors are showing interest in the stock. The highest delivery was seen in HDFC, Balkrishna Industries, PFC, Indus Towers, and UltraTech Cement among others. 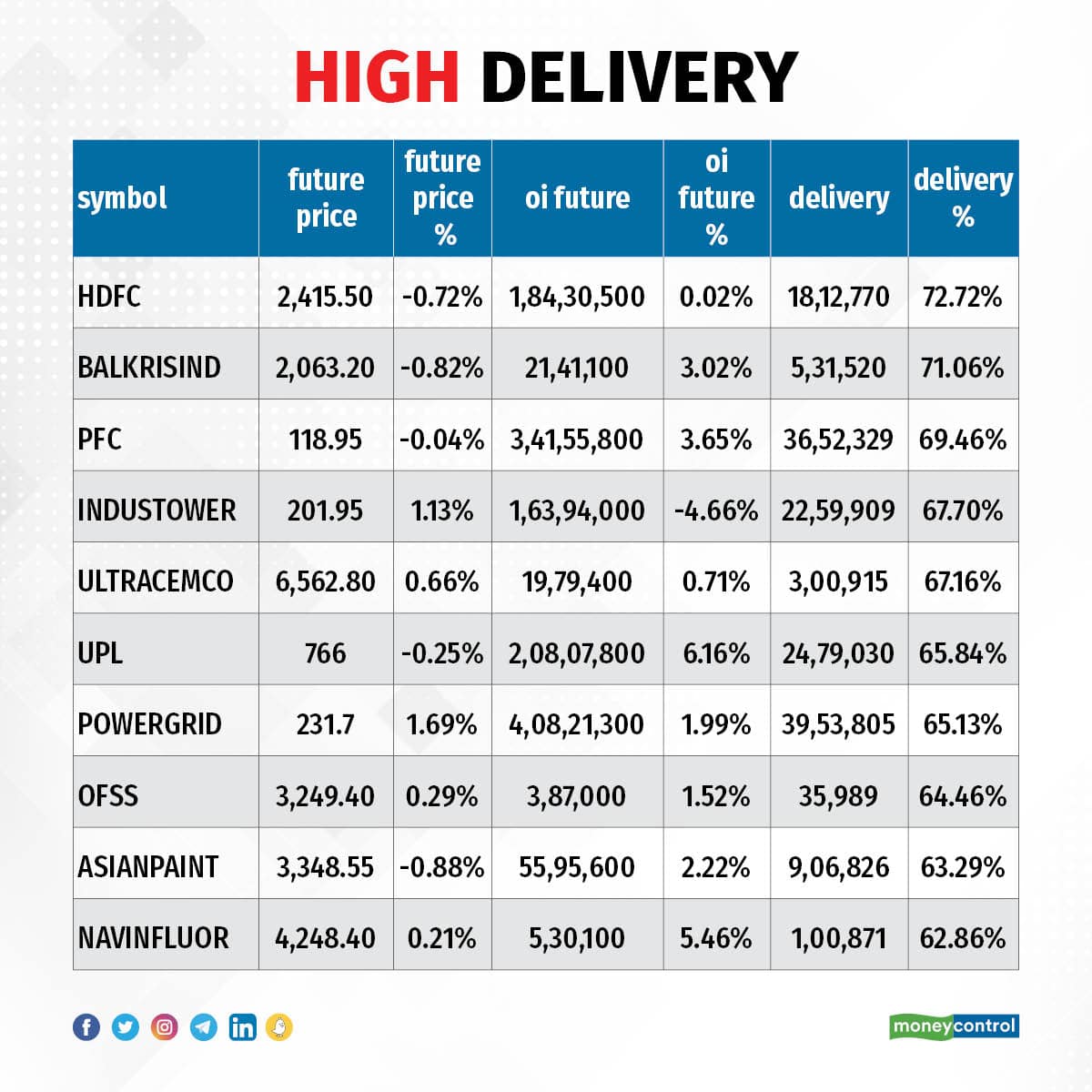 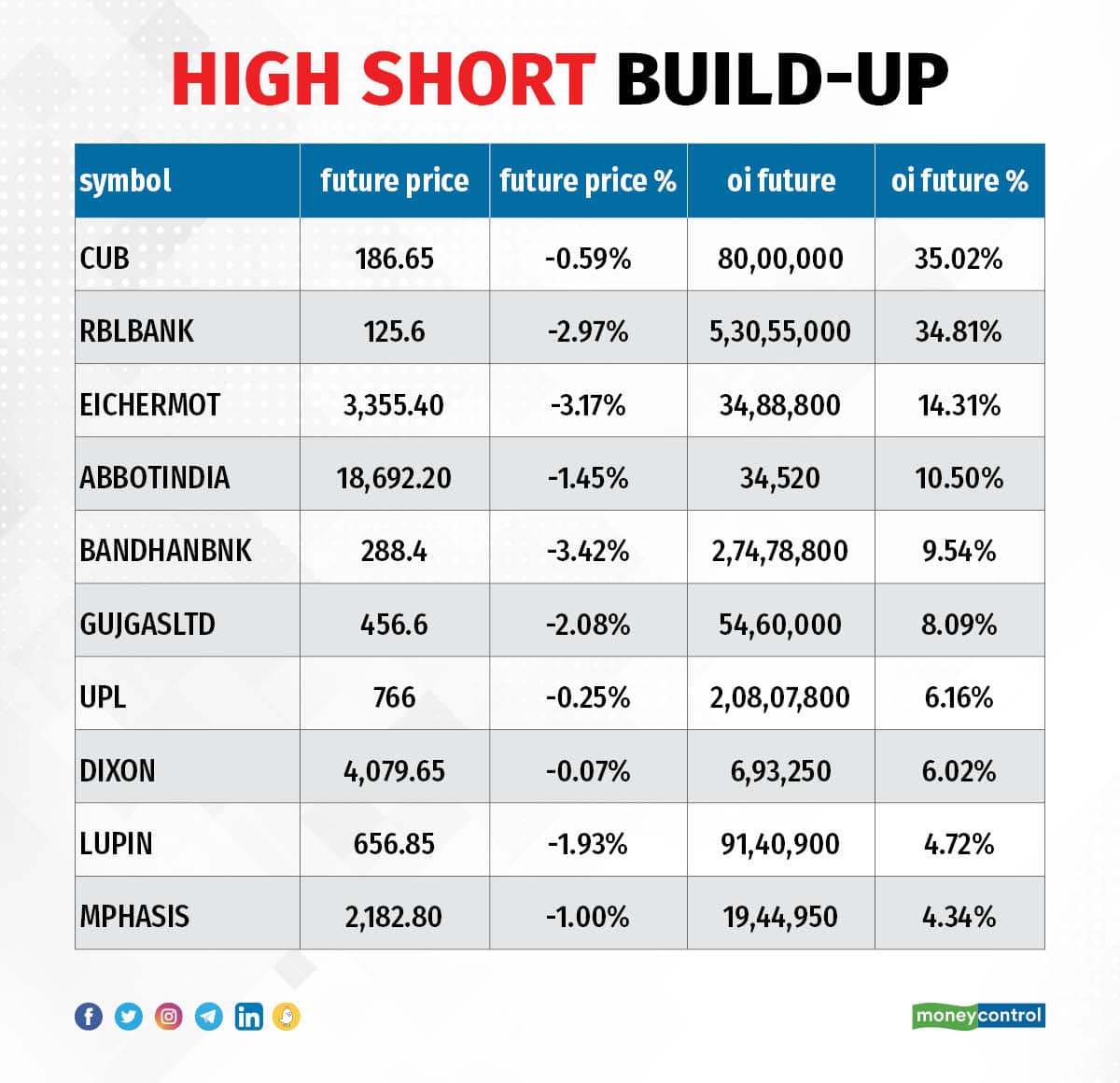 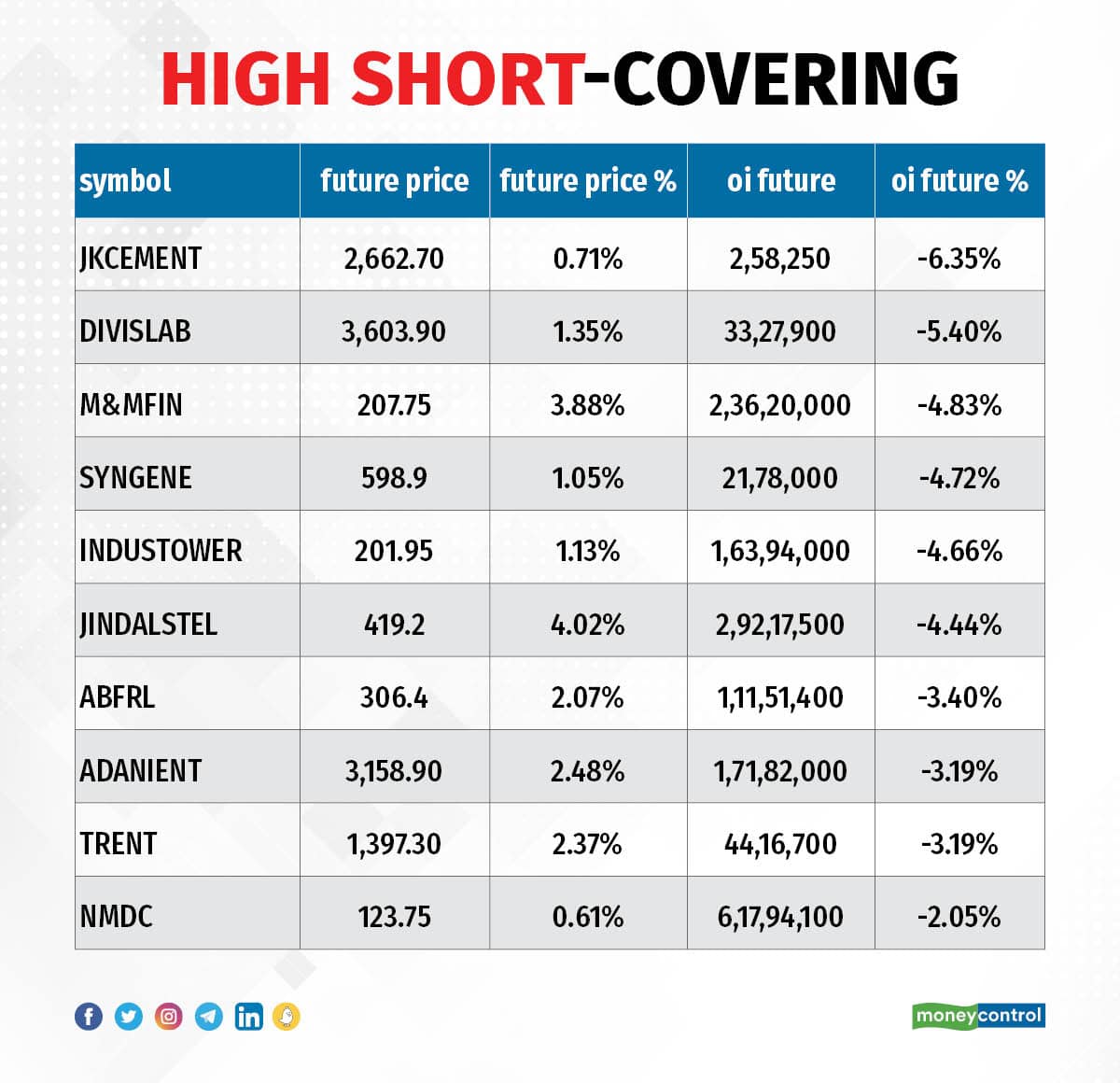 Orient Electric: PGIM India Mutual Fund sold 13,08,014 equity shares in the company through open market transactions. These shares were sold at an average price of Rs 261.79 a share.

Sapphire Foods India: Edelweiss Finance and Investments sold 3,43,250 equity shares in the company at an average price of Rs 1,220.22 a share.

Hindustan Aeronautics: Officials of the company will participate in the business update conference call hosted by ICICI Securities.

Eicher Motors: Officials of the company will meet Ethos Investment, and Canara Robeco.

SRF: Management will be interacting with certain institutional investors and analysts.

One 97 Communications: Officials of the company will meet institutional investors and analysts.

Reliance Industries: The 45th Annual General Meeting will start at 2 pm on August 29, with addresses and presentations expected from Chairman Mukesh Ambani and other members of the company’s board and subsidiaries. Analysts think this year, the focus may be on the consumer retail business once again.

Cipla: The company has now received six observations, with some referencing to the observations made during the September 2019 inspection, for its Goa plant. There are no data integrity (DI) observations. The USFDA inspected company's Goa plant during August 16-26. The US health regulator inspected the facility in September 2019 and issued a warning letter in February 2020.

NHPC: NHPC and the Himachal Pradesh Government signed an implementation agreement for Dugar HE project. Both the parties signed  a memorandum of understanding in September 2019 for the execution of the project.

Jubilant Pharmova: Subsidiary Jubilant Draximage Inc has received the Establishment Inspection Report (EIR) with voluntary action indicated (VAI) status from the USFDA for its radiopharmaceuticals manufacturing facility in Montreal, Canada. The USFDA had conducted an inspection from June 6 to June 10. With the receipt of the EIR, the inspection stands successfully closed.

RITES: The company has secured a new order with JV partner for the redevelopment of the Kollam railway station for Rs 361.18 crore from Southern Railways. The share of RITES in the order is 51 percent.

UltraTech Cement: As part of its ongoing expansion plan, the company has commissioned cement capacity of 1.3 mtpa at Dalla Cement Works, Uttar Pradesh, which resulted in increase in the unit's capacity to 1.8 mtpa. This is the first phase of capacity expansion announced in December 2020. With this commissioning, the company’s total cement manufacturing capacity in India now stands at 115.85 mtpa.

As we are at the beginning of the September series, there is no stock on in F&O ban list for August 29. Securities in the ban period under the F&O segment include companies in which the security has crossed 95 percent of the market-wide position limit.

Disclaimer: The views and investment tips expressed by experts on Moneycontrol are their own and not those of the website or its management. Moneycontrol advises users to check with certified experts before taking any investment decisions.