According to Shrikant Chouhan, Senior Vice-President - Equity Technical Research at Kotak Securities, Nifty could head towards 12,350 level, but if it slips then 12,250-12,240 would act as major supports.

Bulls gained control of Dalal Street on January 2 as strong global and local cues pushed Nifty within striking distance of fresh record highs and led to over 300-point rally in the BSE Sensex.

According to Vinod Nair, Head of Research at Geojit Financial Services, government’s plan of more than doubling CAPEX over the next 5 years, and the firming up of steel prices after the US and China announced a date to sign the trade deal, pushed the market higher. He believes expectations from the Union Budget, and positive data like GST revenue and 7-month high on India factory production led to the broad-based rally.

“The hike in steel prices undertaken by steelmakers boosted the market sentiment heavily. The move indirectly suggests a recovery in the core economy-related sectors like infra, capital goods, cement, commodities and transport going ahead. Technically, Nifty is heading towards 12,350 level, while on the lower side, 12,250-12,240 would act as major supports for the market,” said Shrikant Chouhan, Senior Vice-President - Equity Technical Research at Kotak Securities.

Maximum call open interest (OI) of 22.63 lakh contracts was seen at the 12,500 strike price. It will act as a crucial resistance level in the January series.

Maximum put open interest of 38.7 lakh contracts was seen at 12,000 strike price, which will act as crucial support in the January series. 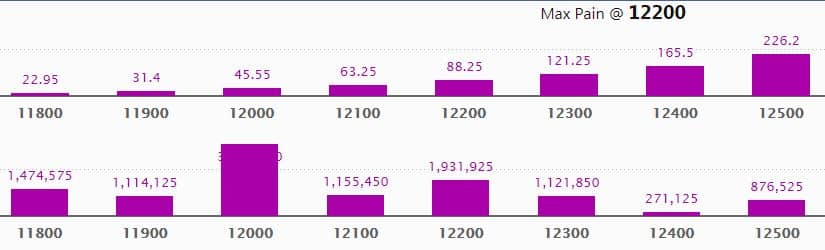 A decrease in open interest, along with an increase in price, mostly indicates a short covering. Based on open interest (OI) future percentage, here are the top 10 stocks in which short-covering was seen.

Authum Investment & Infrastructure: The board will meet on January 3 for a general-purpose.

Octaware Technologies: The board will meet on January 3 for a general-purpose.

Deccan Bearings: The board will meet on January 3 to consider and approve their quarterly results.

Mitshi India: The board will meet on January 4 to consider and approve preferential issuance of shares.

Unitech: The board will meet on January 4 to consider and approve their quarterly results.

SBI, Union Bank: The State Bank of India (SBI) and Union Bank of India are looking to sell their non-performing loans totalling Rs 2,836 crore to banks, asset reconstruction companies and other financial institutions.

ONGC: The company on January 2 walked away with all the seven oil and gas blocks on offer in the latest bid round that saw just eight bids coming in.

MTNL: MTNL has started the process to monetise assets worth Rs 23,000 crore as it aims to turn profitable in the next fiscal year, PTI reported.

Yes Bank is under the F&O ban for January 3. Securities in the ban period under the F&O segment include companies in which the security has crossed 95 percent of the market-wide position limit.
Nishant Kumar
Tags: #Market Cues #Nifty #Sensex #Trade Setup
first published: Jan 2, 2020 08:43 pm