As of October 18, 25 companies in Jhunjhunwala’s portfolio have released their shareholding data for the Q2FY20. Of these, 80 percent of the stocks have given negative returns on a year-to-date (YTD) basis.

Billionaire investor Rakesh Jhunjhunwala rejigged his stake in 10 companies in September while keeping his stake constant in 15, data collated on October 18 shows.

Jhunjhunwala increased his stake in five companies which include names like Federal Bank, VIP Industries, Agro Tech Foods, NCC and TV18 Broadcast. These stocks have fallen 9-40 percent so far in 2019, according to data collated from AceEquity.

As of October 18, 25 companies in Jhunjhunwala’s portfolio have released their shareholding data for Q2FY20. Of these, 80 percent of the stocks have given negative returns on a year-to-date (YTD) basis.

Shares of DHFL plunged more than 90 percent, followed by The Mandhana Retail (65 percent), Autoline Industries (60 percent), and Edelweiss Financial Services which plunged 52 percent so far in the year 2019. 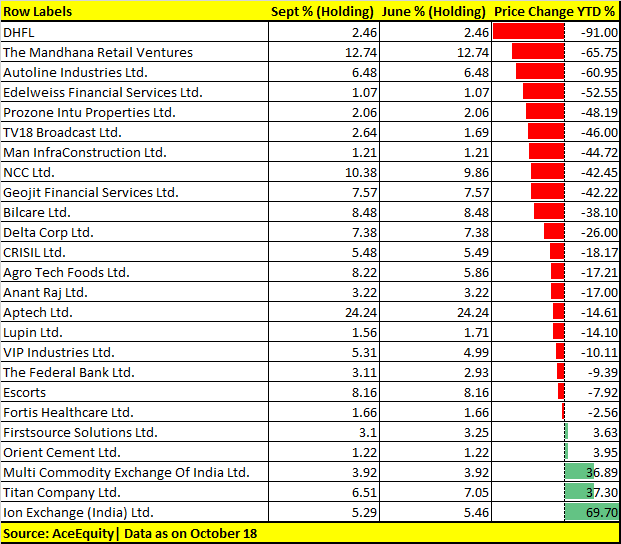 The company's jewellery sales declined sharply in July, as gold became costlier and the consumption sentiment in most parts of India remained subdued, thus resulting in lower discretionary spends on high-value products.

Some green shoots were visible in August and September. During these months, retail (secondary) sales grew 15 percent year-on-year (YoY) due to increased impetus towards advertising. On the flip side, experts say this would impact margins.

Two stocks in which he kept the rate constant and are trading in the green on a year-to-date basis include Orient Cement and MCX.

Over the weekend, Orient Cement reported narrowing of its net loss to Rs 7.70 crore in the quarter ended September 2019. The CK Birla Group firm had posted a net loss of Rs 16.74 crore in the same quarter year ago.

Multi Commodity Exchange (MCX) last week reported over two-fold jump in net profit at Rs 71.75 crore for the quarter ended September. Its net profit stood at Rs 35.93 crore in the year-ago period, the company said in a regulatory filing.